Building on the success of beloved kart racer All-Star Fruit Racing, Italian game developer 3DClouds set out to develop Xenon Racer, a game that pays homage to arcade classics like Daytona, Wipeout, and F-Zero. While the roughly 20-person studio set out to create a game that honored old-school arcade racers, they also wanted to inject Xenon Racer with modern visuals and physics.

To find out how 3DClouds leveraged Unreal Engine 4 to do this, we interviewed Production Director Sergio Rocco, Community Manager Tommaso Valentini, and Lead Programmer Christiano Orlandi. In our discussion, the trio discusses working with esteemed automotive designer Marcello Raeli, elaborates on what the futuristic setting allowed them to do, and shares developmental tips.

Thanks for your time. Developer 3DClouds previously worked on All-Star Fruit Racing. What has the studio learned from working on the kart racer that you’ve brought to the development of Xenon Racer?

Production Director Sergio Rocco: On All-Star Fruit Racing, we built the data structures, the organization, and the flow that the company would build off of. With it, we also developed the online support for all the platforms, which served as a starting point for our next projects.

Many are saying that Xenon Racer’s game design feels like a modern remake of old-school arcade racing games. Was this a design goal for the team?

Community Manager Tommaso Valentini: We wanted to re-imagine arcade titles from the 90s. While we wanted to make a game that paid homage to these games, we also wanted to make a product for a usually neglected niche portion of the market. Xenon Racer takes inspiration from the likes of Ridge Racer, Daytona, Wipeout, and F-Zero while forming, at least in our opinion, its own well-defined and unique soul.

Considering the game is set in 2030, how did the studio decide on the near-future theme?

Valentini: With Xenon Racer, the aim was to create an old-school arcade racer where players can have simple fun right from the start. We chose a futuristic theme, which fits the arcade vibe and allowed us to use our imagination and creativity when designing tracks, cars, and buildings. 2030 isn’t too far in the future and our idea was to follow a realistic evolution of car design. [Automotive designer] Marcello Raeli helped us a lot with these concepts and created some marvelous vehicles, which became one of Xenon Racer’s strengths. 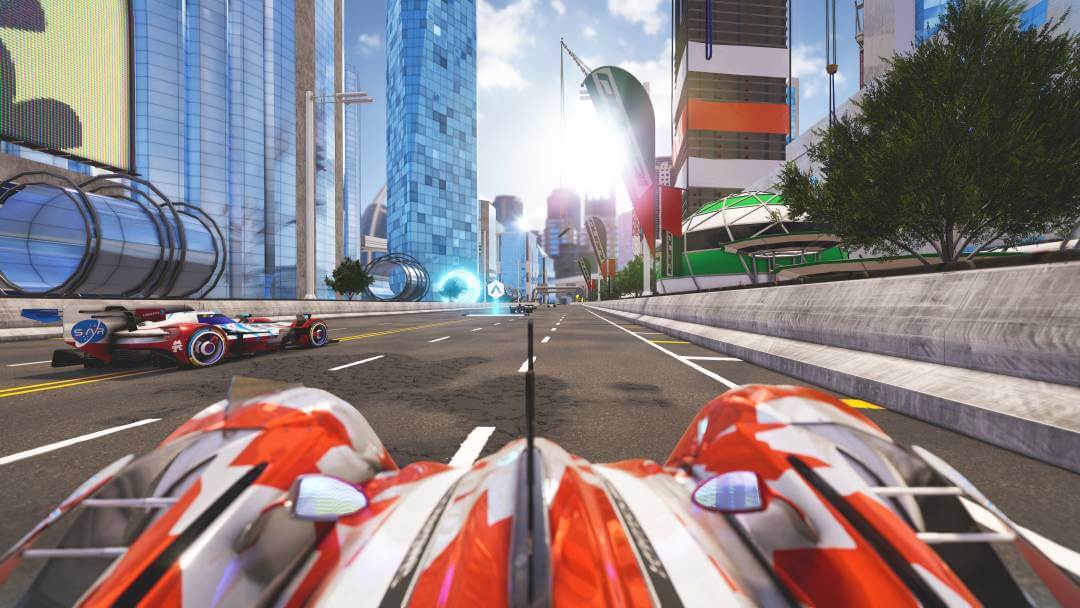 Drifting to earn speed boosts is important in Xenon Racer. Can you talk about how you designed these mechanics?

Rocco: It’s been a long time since we felt like we had a true “arcade” racer. So we decided to study older games like Ridge Racer, Daytona, Out Run, and Wipe Out in depth. Xenon re-interprets the game mechanisms of these great arcade classics from the 90s in a modern age. The challenge was to create a game that felt similar to those games, but weren’t bound by 90s’ technical limitations. So we used real physics. Xenon therefore infuses our passion for those 90s games with the look and technologies of today.

Xenon Racer makes players respawn after they’ve taken a certain amount of damage. Can you explain your thought process for implementing this system?

Rocco: As we mentioned, Xenon was born with the idea of being an arcade racing game through and through. Having to respawn the car after totalling it is a classic arcade driving mechanism. It seemed perfect for our project, and thanks to modern technologies, we were able to reproduce that effect with more spectacular VFX. 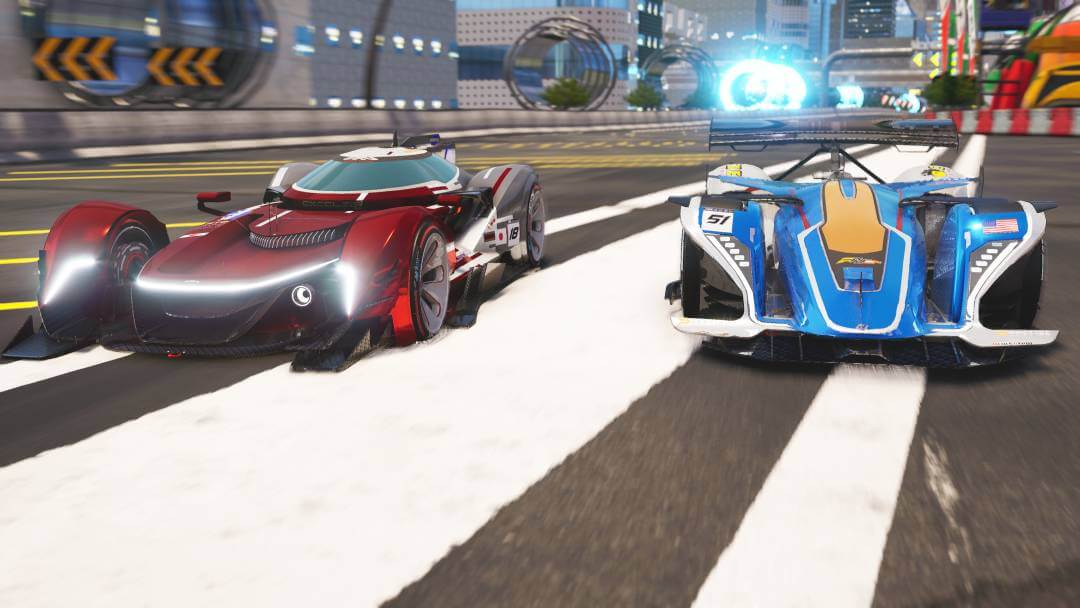 Can you elaborate on how the studio achieved the game’s great particle effects, cool-looking reflections, and excellent car models?

Rocco: Unreal Engine 4 provides us a very powerful development environment that facilitates excellent visual effects. It was very important for us to have a clear vision for how we wanted them to look. As for the vehicles, we knew from the beginning that we wanted to get Marcello Raeli involved with the project. He is a professional car designer who works for numerous car manufacturing companies. Marcello was excited to participate in the project and immediately understood the spirit of the vehicles we wanted to create. The realization of our vehicles, coming from the mind of a real car designer, has made our machines not only beautiful, but also credible, as we will probably see cars very similar to those featured in Xenon Racer in the next 10 years, due to the fact that Marcello is drawing those types of prototypes in real life.

Considering Xenon Racer runs well, how did you keep performance in check? Were there any UE4 tools that were particularly helpful?

Orlandi: In order to fine tune performance, we developed a tool that automatically runs through all the tracks (for every platform) and collects data that we can analyze to find problem areas on tracks. We coupled this with Unreal Engine 4’s ability to analyze and modify rendering parameters during runtime through the command prompt, which was incredibly useful to us when we had to troubleshoot for bottlenecks. Our artists made good use of Hierarchical Level of Detail (HLOD) and Proxy Geometry tools in order to best optimize the tracks. Meanwhile, when it comes to the CPU side of things, we have been using the Session Profiler Frontend in order to identify the more problematic lines of code.

Xenon Racer has tracks that take players through Tokyo, Dubai, and more. Can you talk about your approach to locations and track design?

Valentini: We wanted to re-imagine the most iconic cities on the planet. Tokyo and Dubai come to players’ minds and picking them as key locations allowed us to let our creativity go wild. Each and every one of our locations are faithfully inspired by their own real-life counterparts, but we created futuristic visions of them with artistic liberties. The buildings alternate between historical buildings, breathtaking panoramas, and crystal buildings that create a variety not often seen in this genre. 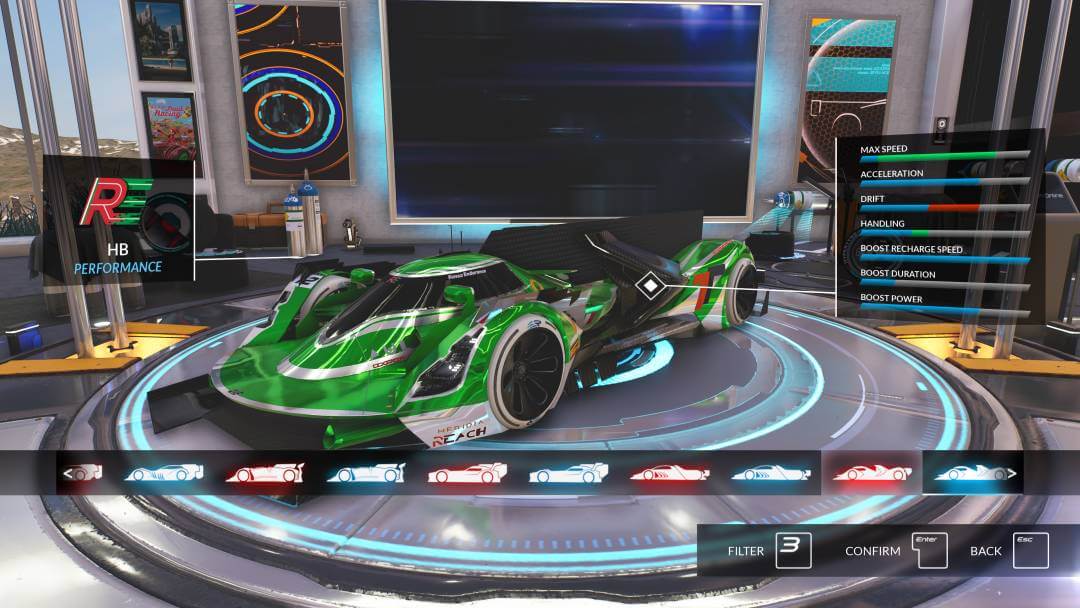 Orlandi: The wide range of customization of the vehicles is, for the most part, derived from our previous title All-Star Fruit Racing. Through the same approach and UE4 components, it was rather simple to add or modify car parts to customize based on the user’s preferences. The system is heavily data-driven, allowing artists to handle and test the different customizations directly in-editor without having to build the game first. This ended up speeding up the development and testing of all the possible car customizations.

What made UE4 a good fit for the game?

Rocco: UE4 consistently provides an increasingly vast development environment, complete and powerful in every area. It allows development teams to channel more energy into the game and not into the technology RND.

Did the studio leverage Blueprints in any way?

Orlandi: We used Blueprints to handle gameplay flux, UI, and menus. For all the game’s areas that weren’t highly performance dependent, it [allows for] a quick method of development and prototyping. We also used Blutility to create fundamental tools for the rapid development of the track splines and the urban environment surrounding them. 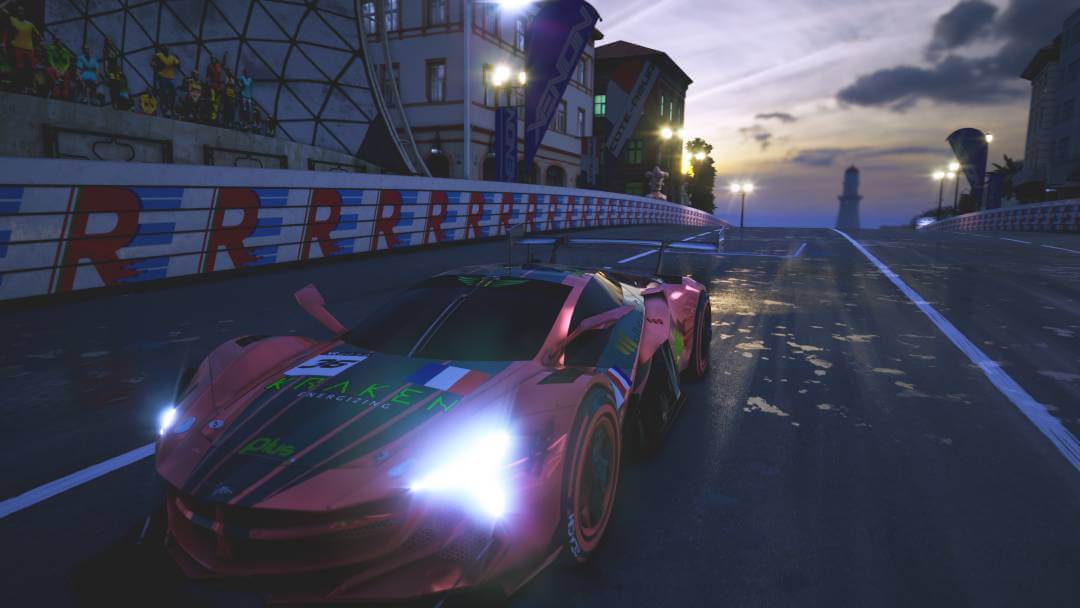 Did the studio use the UE4 Marketplace at all?

Did the studio have any favorite UE4 tools or features?

Lead Programmer Christian Orlandi: One thing that helped us tremendously when developing the AI was Visual Logger, which is a tool that allows the recording of events and data during a race and is then later able to recreate them frame-by-frame. This made it much easier to analyze and solve any bizarre behaviors that AI-controlled vehicles would do in specific situations. Another interesting UE4 feature is the excellent integration of both code and Blueprints. This allowed us to rapidly display all the parameters and data structure that the artists and designers needed in order to fine tune every element of our game. This also freed up our programmers to focus on the development of other features.

Thanks again for your time. Where can people learn more about Xenon Racer?

Valentini: Thanks for the questions. People can keep up with all of the game’s future updates by following 3DClouds on Twitter, Facebook or Instagram or by joining Soedesco’s Discord channel to directly chat with developers!