Released in June on PlayStation 4 and Xbox One, Samurai Shodown received great reviews when it launched. DualShockers stated that the game “is one of the best and most unique fighting games this generation, hands down.” With Nintendo Switch, PC, and Stadia versions on the way, we interviewed Art and Game Director Nobuyuki Kuroki to see how SNK crafted a fighting game that not only appeals to hardcore enthusiasts, but also feels accessible and modern to fighting game newcomers.

Kuroki originally joined SNK in 1993 and contributed art to numerous classic series including Fatal Fury and Art of Fighting. After a hiatus with the company, he returned in 2014 to lead art initiatives behind The King of Fighters XIV before stepping into direct 2019’s Samurai Shodown.

In our discussion, Kuroki reflects on the pressures of making a new Samurai Shodown game, which fans have been eagerly awaiting for over a decade. The game director also talks about how the studio approaches balancing characters and elaborates on how this installment leverages deep learning to create AI ghosts. Finally, he talks about the franchise’s transition to Unreal Engine and how that empowered the team to re-create their beloved classic 2D characters into a beautiful, stylized 3D world.

Samurai Shodown has been called a prequel and a reboot to the series. Can you describe what you were hoping to accomplish with the 2019 release?

Art Director and Game Director Nobuyuki Kuroki: Samurai Shodown is an IP dating back over 20 years since its conception. So, naturally there are many fans from the Neo Geo days. Of course, we cherish the fans that supported us, but if we want to see the series continue to grow, then it is essential that new blood enters the scene. Samurai Shodown is a simple yet devilishly complex game, and we strived to make something that can be both challenging to old fans yet easy enough to pick up for new ones.

With it being 11 years since the last Samurai Shodown, did you feel a lot of pressure coming into the project?

Kuroki: As I mentioned, Samurai Shodown is game with a bunch of history behind it. We were worried that hardcore fans of the series would reject this new version, if we’re to be honest. But I can’t tell you how relieved we were when the original developers of the old Neo Geo Samurai Shodown games praised our game and gave it their blessing. That gave us the confidence that our version was true to its core, and we were on the right path with our design choices.

With 13 returning characters and three new ones, how did you approach character design and balance?

Kuroki: Truthfully, the designs for the original 13 characters weren’t changed around too much as they are fully established in the setting and lore. However, we tried to make sure that we didn’t lose that nostalgic look in between the transition from 20-year-old sprites to 4K 3D models. So, some things were arranged, but their overall look has been kept intact.

But for the new characters, we took a look at modern sensibilities and what younger members in the [fighting game community] would find interesting and designed them along those lines.

When it came to balance, we tried to make them standout, but also made them feel like they belonged in a Samurai Shodown game. They can still take out over 30 percent of your HP with a single hit, so some things will never change.

Samurai Shodown introduces the Dojo, which uses deep learning to create AI “ghost” versions of real players to fight against. What motivated the studio to come up with this concept and how did you implement it?

Kuroki: Looking back, history always shows us that combining the newest and best innovation with entertainment always leads to incredible things. The change from calculators to videogames or objects rendered in real-time 3D becoming playthings in a virtual world are easy examples. What we set out to do was to combine the latest in deep learning tech with light and fun entertainment. All of this was brought about through a trial-and-error process.

Our engineers implemented this idea into the game, and our game planner tested it out. Through weeks of testing, we were still left scratching our heads as to how to better improve upon it. In the end, Ghosts and [these] features were the result of many hours of hard work.

Samurai Shodown has been heavily praised for being accessible to newcomers while offering a lot of depth. How did you strike that balance?

Kuroki: I feel that Samurai Shodown is easy for new players to get into because there is little need to go through the process of learning long combos before you even fight an opponent.

However, you can’t just remove combos and consider the game finished. We made sure there are elements in there like dodging and weapon deflecting that allow fighting game pros and new players alike to show off their skills. Our hope is that everyone can have a fun time playing together. 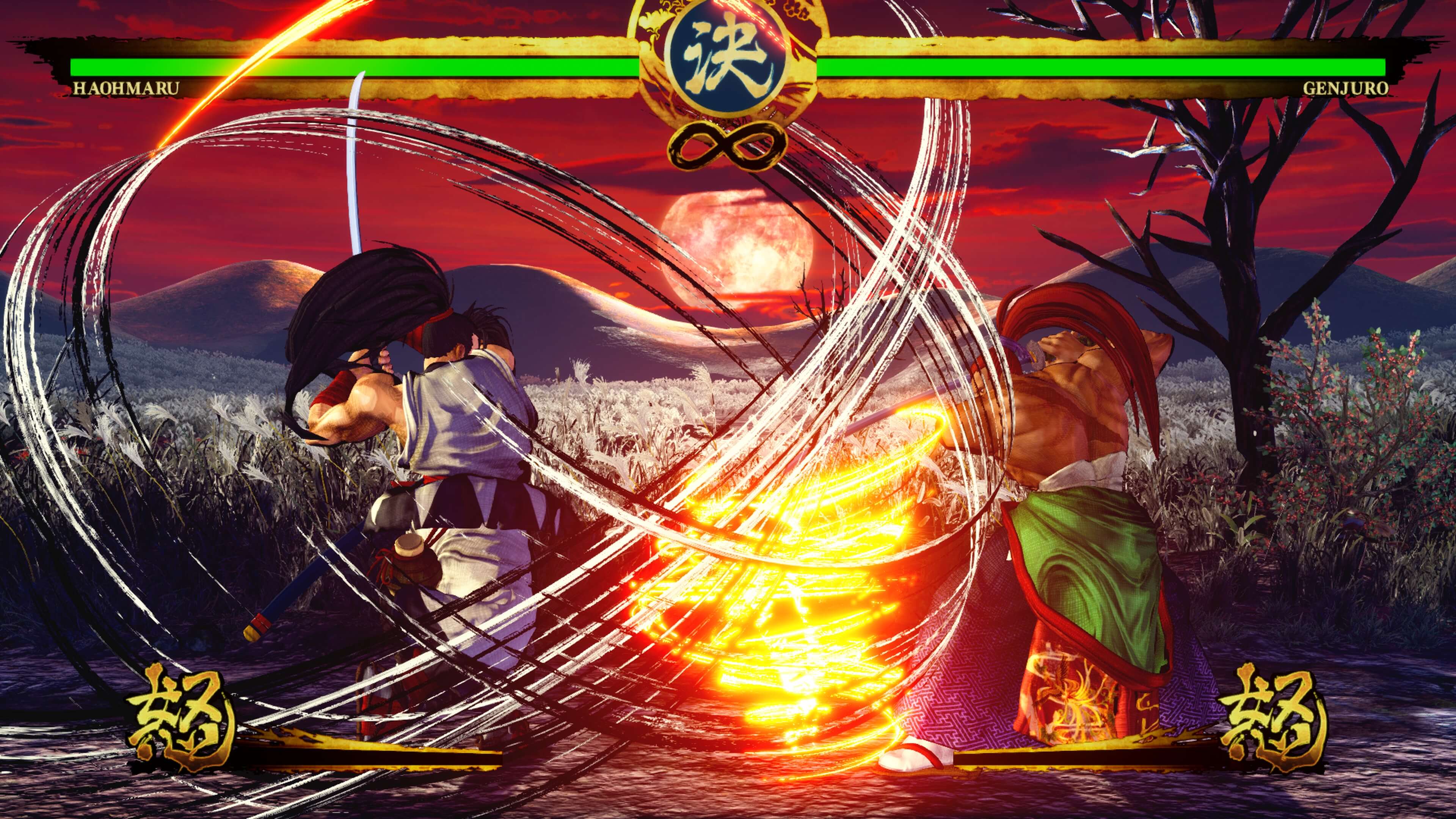 Samurai Shodown introduces the Rage Gauge, which allows players who have taken damage to build up strength throughout the course of a fight or to spend it all on a singular super move. Can you elaborate on the inclusion of this mechanic?

Kuroki: If, for example, players could only use “Lightning Blade” during their Rage Explosion, then opponents would only look out for that. However, by giving the user options like using their Lightning Blade or their Weapon Flipping Technique, then it keeps opponents on their toes. Players can also use their Lightning Blade to turn the tables, or refrain from using it and instead continue to fight with the increased attack power. We wanted to give players options, so that’s why we added the system.

Kuroki: The 2D sprites used in the past Samurai Shodown titles are truly charming, but the focus in the gaming world has changed and the push for 3D professional artists is more [in demand] than ever.

We set out not to make a half-hearted attempt at recreating past styles, but rather to challenge our skills by making the best 3D graphics. And, truthfully, UE4 has made the development of this game a lot easier. We hardly had any troubles when creating assets, so that allowed us to better focus on art and textures. You could probably say that it’s thanks to UE4 that our models look fluid and polished. 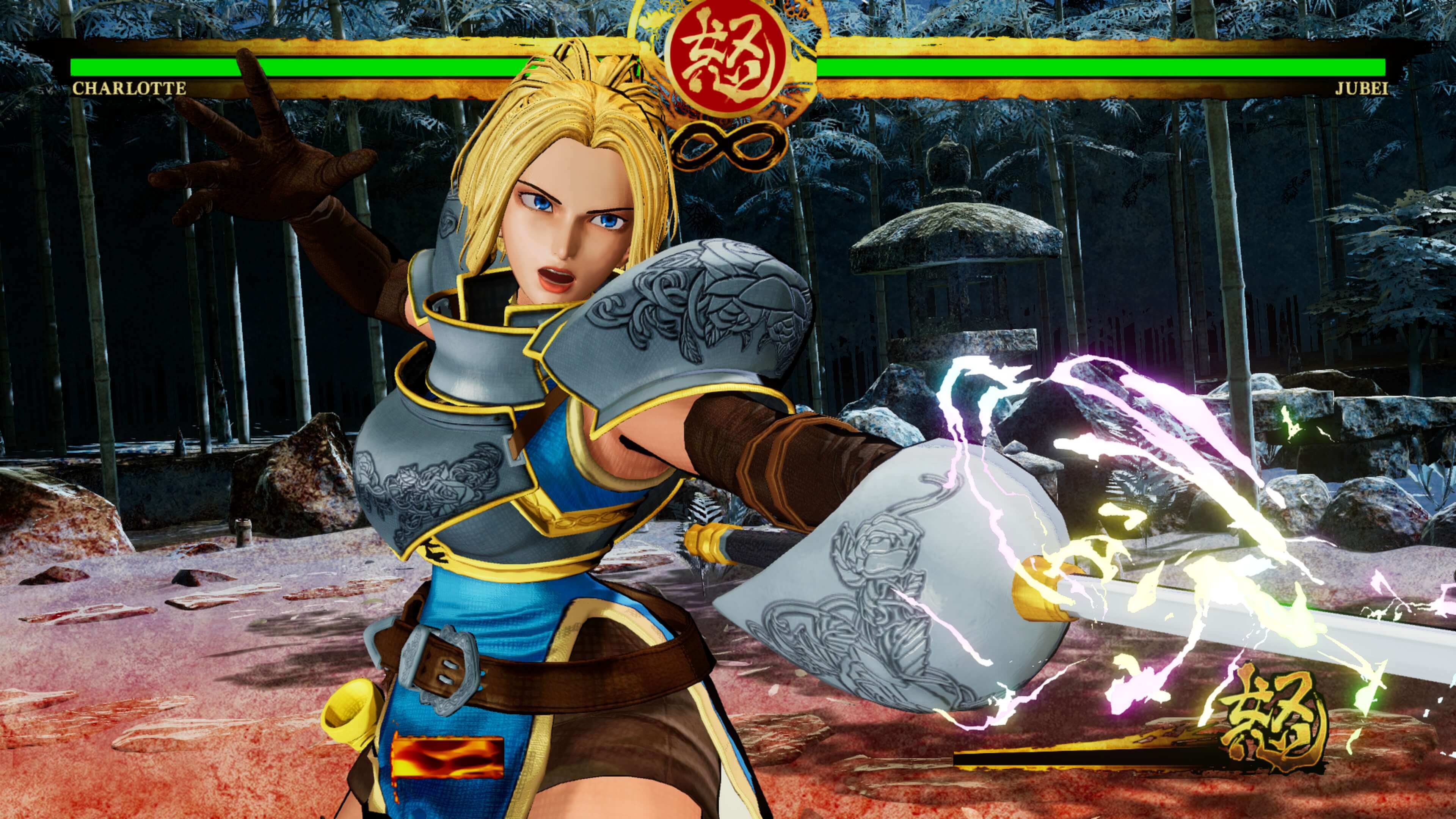 Samurai Shodown features some amazing attack animations, particularly in regards to the super moves. How did you deliver the stunning visual effects in the game?

Kuroki: We’ve come to understand that Samurai Shodown is different from KOF (The King of Fighters) in that it’s actually quite difficult for special moves to land. That’s why we decided that it’s okay for the animations to be a bit longer since they’re not something that gets triggered often, and therefore wouldn’t become tiresome to look at.

Just by extending the length of the attack by even a bit, we were able to make them really slick and interesting to look at. Of course, we understand that if they go on for too long, it’ll become boring, so we made sure to alter them accordingly. Also, we wanted to really give them impact so that you actually felt it when you get hit, and dishing it out feels equally satisfying. Additionally, another reason why they look so good is because we have a fantastic animation team!

Was it true that SNK at one point considered taking the visuals down a more realistic route? How did the studio end up deciding and developing the finalized anime-style graphics?

Kuroki: Samurai Shodown is not just a Japanese product, but is something for the world to enjoy. And with that, it makes sense that we would consider making it more realistic looking. However, after comparing screenshots of our game in development with other games already on the market, it was clear that our game was starting to blend in with others. We worried that the “samurai style” the series is so often praised for would become forgotten, so we decided that there needed to be something that made the game stand out on its own.

By incorporating traditional Japanese art with modern anime and manga concepts through Unreal Engine, we ended up with the Samurai Shodown style that’s playable today. 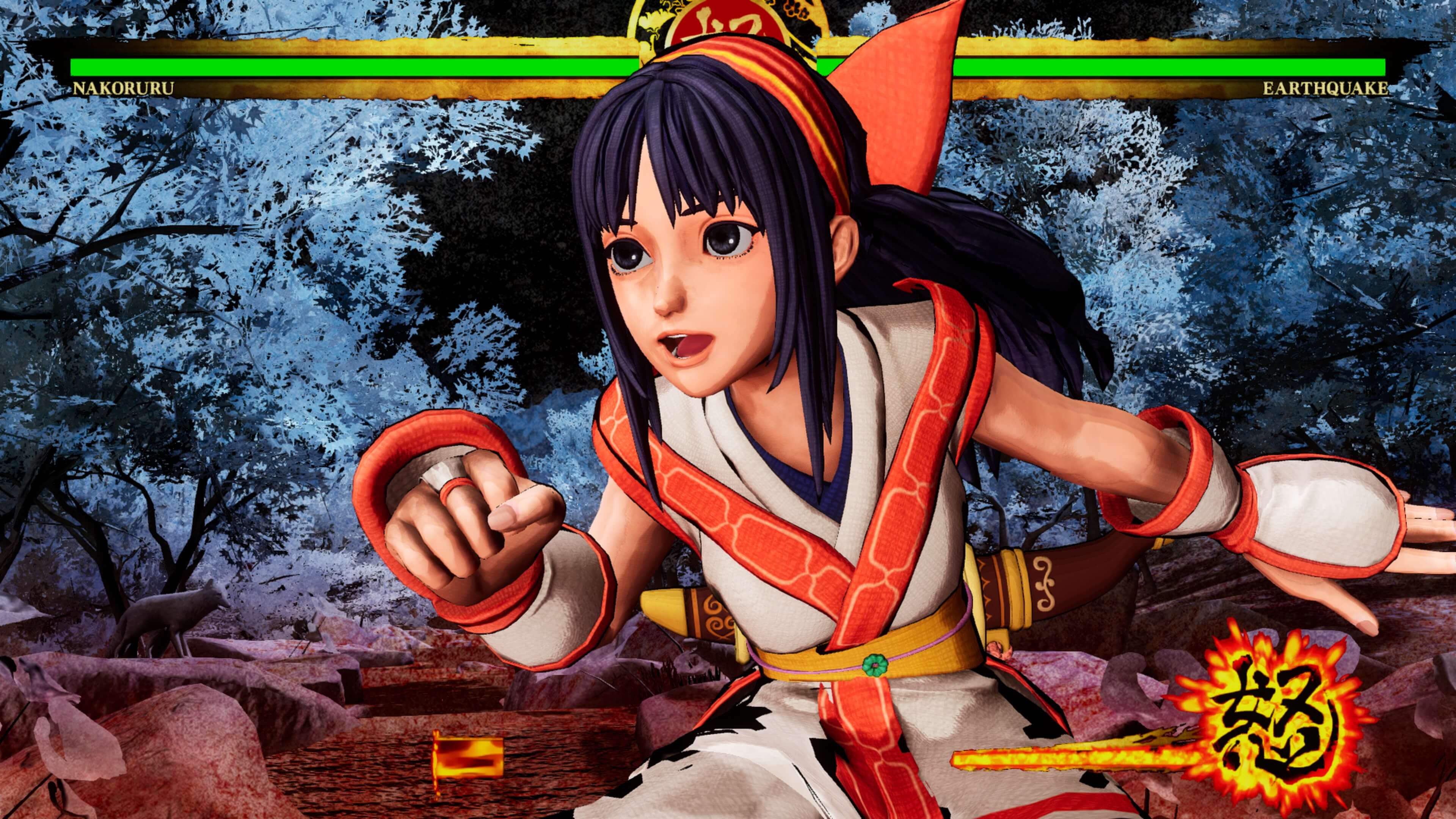 With beautiful stages that include beaches, forests, and temples, how did you design the levels in the game?

Kuroki: First off, one of the things we always make sure of when we’re designing the stages is that they don’t just come off as “pretty pictures.”

Backgrounds in fighting games, like their characters, need to show off their own individual flair. For example, the red sky and white moon in Genjuro’s stage certainly stands out.

Also, though the actual place in Haohmaru’s stage does not exist, it certainly contains elements often found in Japanese art like Mt. Fuji, Torii gates, and the sea. We added many things to the stages that make them distinct and fresh.

If a player can fight in, say, Geunjuro’s stage, and then return home and be able to explain the stage to their family by bringing up the words “red sky” and “large moon,” then we would consider that a success on our part.

We like to feel that it’s through this method that we’re able to keep our stages fresh and unique compared to other fighters out there.

What made UE4 a good fit for the game?

Kuroki: Of course, it’s a lot easier to make graphics and textures, but what really helped us out is how seamless it is to create versions for different devices from the same source. Not too long ago, you had to carefully alter the colors and assets depending on the device, but with UE4, all that has practically gone away. 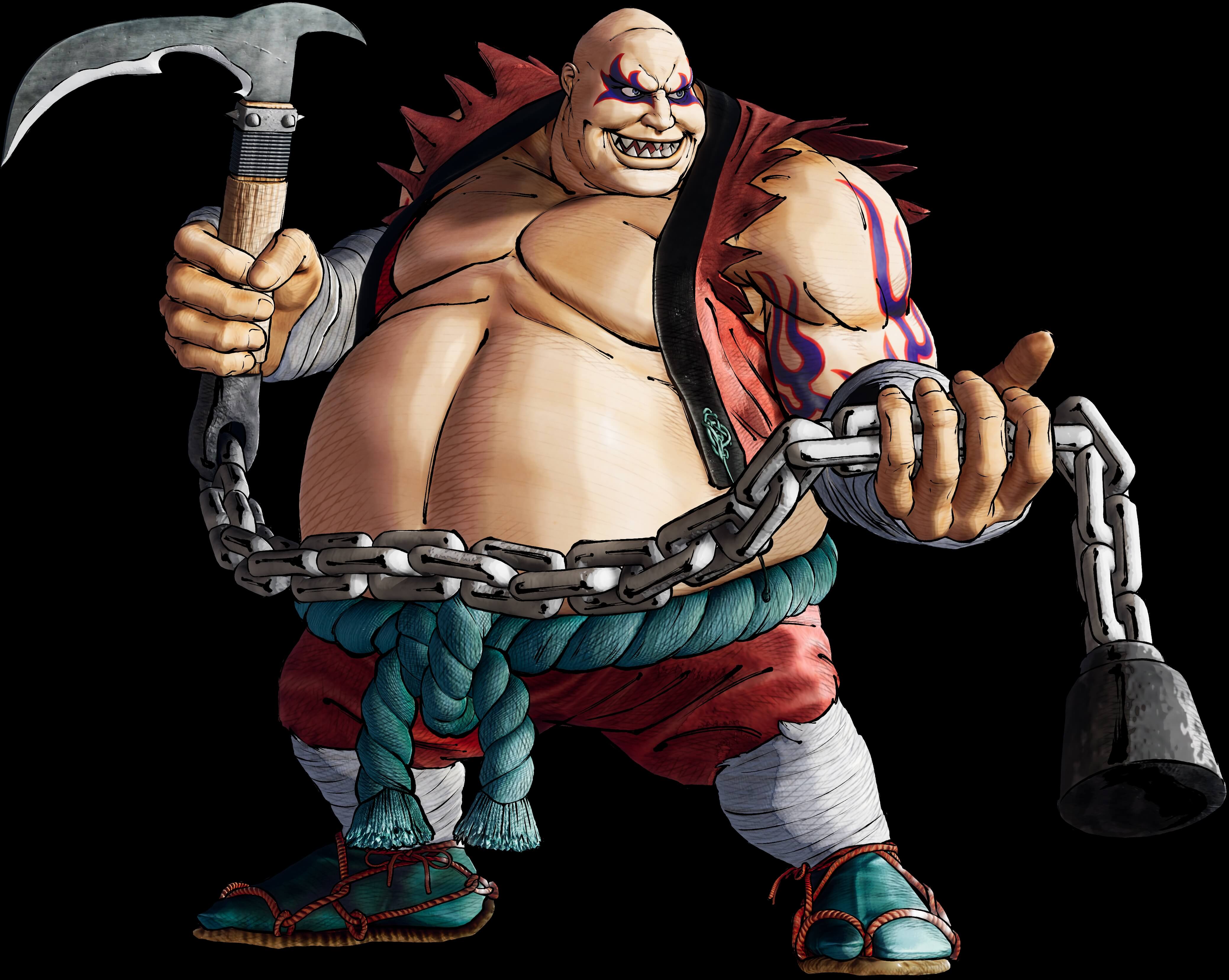 With it being the studio’s first UE4-powered game, how has the transition to the engine been?

Kuroki: Though I am the director, I am also an artist, so I often look at things through that lens. I somewhat already answered this question, but, simply put, it has made making the high-fidelity graphical assets in the game extremely easy. I really felt like I had full control over what I wanted to do.

However, one thing must be said; the UE4 engine is truly amazing, but it was still challenging to make assets that stand out and have personality without dropping the rendering quality.

Did the studio have any favorite UE4 tools or features?

Kuroki: I loved how easy it is to organize and keep track of the assets. It was simple to refresh and was easy to manage large amounts of assets, and the search function was quite powerful. I never had any problems finding the data I was looking for.

Thanks for your time. Where can people learn more about Samurai Shodown?

Kuroki: Thanks for having us. People can learn more on our Samurai Shodown’s website.