ToeJam & Earl: Back In The Groove Review – Funky In All The Right Ways

Home » ToeJam & Earl: Back In The Groove Review – Funky In All The Right Ways
Recent News 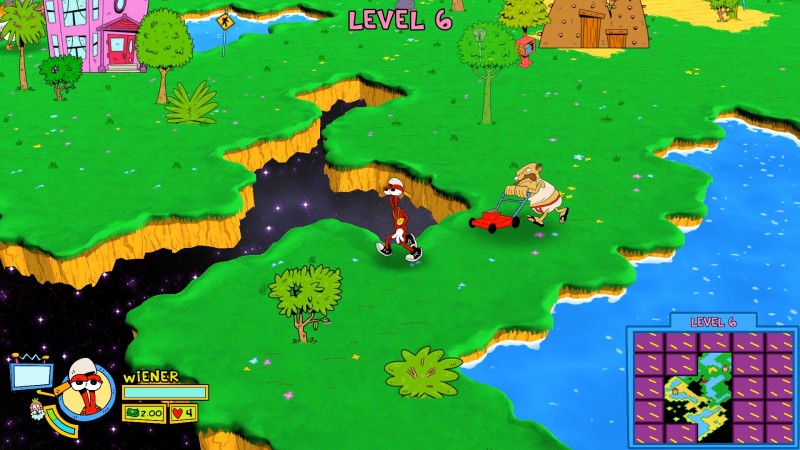 The original ToeJam & Earl introduced a generation of console players to the concept of roguelikes, where success depended on negotiating randomized landscapes and using items that were as likely to harm as help the player. The Genesis game starred a hip-hop-loving alien duo with a penchant for funk and a fear of troublesome Earthlings, who survived thanks to their good luck and cartoonish gadgets. A pair of sequels reinforced the concept that, well, maybe not every budding franchise has enough gas in the tank to keep the rocket going. Now, 17 years after the last game hit Xbox, the pair returns. With co-creator Greg Johnson at the helm, Back in the Groove takes what made the original such an oddball delight and refreshes those ideas to return it to relevancy.

Back in the Groove is essentially a remake of the Genesis original. If you aren’t familiar with that one, the concept is simple: Your spaceship has crashed on Earth, and you need to track down its 10 pieces so you can return to your home planet, Funkotron. As with the original, Back in the Groove trades the subterranean cave systems and confusing dungeon layouts you typically find in roguelikes for an outdoor setting. When you open your map, the sprawling mazes of nodes and paths may seem familiar, but with a notable difference from ordinary fantasy-themed roguelikes: ToeJam & Earl’s interpretation of Earth is one of floating land masses stacked atop one another. Stumble off the edge of a landmass or a narrow trail, and you fall down to the previous level.

What I love about Back in the Groove is how effectively it forces you to make tough decisions. Earth is filled with Earthlings, both beneficial and harmful, and the bad ones can take a significant chunk out of your health meter. ToeJam & Earl (and their friends) aren’t equipped to handle these hazards on their own, so they rely on items that come in the form of presents. These presents are strewn throughout levels, but they have a catch: You don’t know what they are until they’re opened. Some are good, some are bad, but even the good ones have situational uses. Some warp you right to the next spaceship piece. Others summon enemies. Arguably the worst one completely shuffles the presents, so the ones you’ve already identified are scrambled yet again. There are also amped versions of presents, which appropriately amplify their effect. These can be a godsend, such as giving you an extra-long speed boost with hitop shoes, or a bummer, like summoning an aggressively persistent storm cloud that hovers over your hero, intermittently striking them with lightning.

The beginnings of most of my runs would start with me opening everything I got, with occasionally disastrous results. Rocket skates are great tools when you’re expecting them, but when they catch you by surprise, you can easily get propelled off the edge of the world and lose a bit of progress. Similarly, tomato rain is an effective way to clear out attacking boogiemen and mall cops, but if nobody’s around when you open the box, it’s a bummer. You can pay a man in a carrot suit to get the presents identified, but if you don’t have the cash, you either risk a present’s negative effects or hoard your stash until you can safely ID the loot. Fortunately, money is treated with the same apparent disregard as gifts are in this version of Earth, and you can find cash by wandering around.

Each run in Back in the Groove features 25 levels, and with only 10 parts to find, some levels don’t have much to find beyond an exit. As with the risk of opening presents, you have to weigh the temptation of fully exploring a level – getting presents and cash for your trouble – or making a beeline for the next stage. The more time you spend exploring, the more Earthlings you encounter, along with the dangers that come with their presence. You also gain XP by revealing tiles on the minimap, which in turn allow you to gain promotions throughout your journey. Along with new titles (including a personal returning favorite, “Poindexter”) comes a chance to spin a wheel to get stat boosts – a nice update to the original formula. There’s also more overall variety to the way each character plays. ToeJam is still faster, and Earl can withstand more damage before ultimately transforming into a harp-strumming ghost, but the systems run a bit deeper.

Each of the game’s nine characters (including two versions of the titular heroes) has unique passive abilities, stats, and starting presents. I gravitated toward Earl, because he’s able to eat and restore health from the bad food items scattered around the world. Players who like mobility might prefer ToeJam more, since he gets extra mileage from footwear items. Peabo’s high luck gives him a better chance to avoid taking damage when an Earthling makes direct contact, which can be a godsend if you struggle to avoid them. There’s not a night-and-day difference between any of the characters, but the subtle distinctions are there for players who want to tune their game a bit toward how they play.

Back in the Groove isn’t going to wow players with photorealistic visuals, but this is also a game where one of the most fearsome enemies is an out-of-control ice-cream truck. The creators have gone with a hybrid style that works well and supports the overall weirdness. The terrain looks as though it was shaped out of modeling clay, while the characters and everything else are essentially crisply detailed drawings come to life. It reminded me of a hybrid of Dr. Seuss’ stretched and skewed proportions, with PaRappa the Rapper’s wiggly, flat presentation. The effect is especially pronounced during the night levels, where your character’s flashlight helps to create some surprisingly great shadow effects. 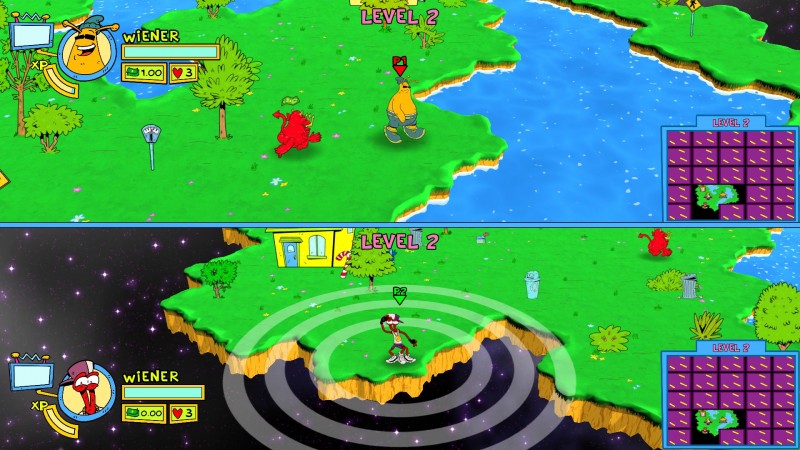 I really appreciate how accessible Back in the Groove is, overall, even if you’re not the kind of player who naturally gravitates toward roguelikes. Failure is certainly likely, but it’s not inevitable here. I never felt as though I was ever locked into a terrible situation; even when I was surrounded by dangerous Earthlings and low on good presents, I could always jump down to a previous level and find another approach. It’s a solid experience as a solo player, but it’s even better in co-op. In addition to speeding up the time you spend finding exits and your spaceship parts, you can share health with a partner and even borrow one of their lives if you run out. Back in the Groove has so much good-natured silliness that it almost feels like a waste not to share it with a friend, either in local split-screen or online co-op.

Even after successfully reassembling my ship, I was ready to start all over again – especially after unlocking new hats, which add fun new modifiers like granting immunity from the control-reversing Cupid’s arrows or providing a cash boost every time you use a broken present. These are strictly optional, however, so you can keep your roguelike experience pure if you’re into that sort of thing. Personally, I liked tinkering around with these elements to see how they upended the strategies I’d started to depend on.

All these years later, I wasn’t expecting a whole lot from ToeJam & Earl beyond a blast of nostalgia. In some ways, the original was ahead of its time, and it only took a little tweaking to bring it up to contemporary expectations. Back in the Groove is a great gift, tucked inside an earnestly funky wrapper.

Summary: Back in the Groove refreshes what made the original such an oddball delight.

Concept: Bring the funky roguelike action from the Genesis era to a new generation of players

Graphics: Surreal landscapes and a crisp-looking cast of weirdos are a delight to behold

Sound: It’s all about the funk, baby. The soundtrack is packed with familiar throwback jams and fresh new tunes that’ll keep your feet tapping

Playability: The basics are simple to grasp, but surprising depth lies beneath Back in the Groove’s candy-colored shell

Entertainment: Solid roguelike elements keep the action engaging and tense. No previous experience (or nostalgia) with the series required