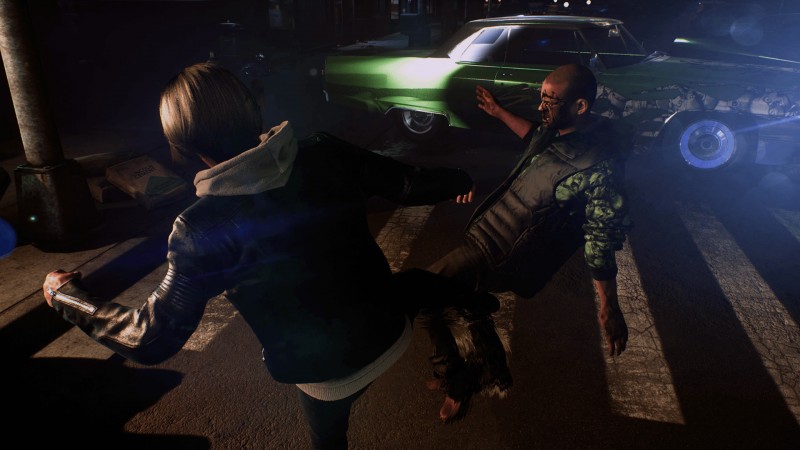 Not every game makes it as far as release. Even the biggest and most successful studios cancel projects when they aren’t shaping up. Those games may never see the light of day, but curious gamers can find footage of many abandoned titles online – and The Quiet Man reminds me of those videos. With a mishmash of awful storytelling and mechanics, this narrative-infused brawler plays like a failed proof-of-concept prototype. Even though it has technically released, The Quiet Man doesn’t feel finished; the entire experience is a series of cascading embarrassments that make you wonder how it escaped cancellation.

You play as Dane, a deaf man who beats up a bunch of people while chasing after a woman who gets kidnapped by a masked man. She looks like his mom for some reason, and also Dane’s friend and a cop are involved. I apologize for the vagueness in that description, but despite The Quiet Man’s attempt to be a narrative experience, it does basically nothing to convey its story.

For your first playthrough (which takes about three hours), the mixture of live-action and in-game cutscenes have no dialogue or subtitles. You’re left to watch these low-budget exchanges and wonder who the characters are, what they are doing, and how they are related to each other. This leaves you completely disengaged from what is happening. Imagine queuing up a few supplementary webisodes for a TV show you’ve never watched, then turning the volume off; that’s what to expect from The Quiet Man in terms of storytelling quality and production values.

One might argue that the lack of dialogue helps simulate Dane’s own experience with the events. However, people talk to Dane and he clearly understands what is being said to him; he smiles, frowns, and otherwise reacts in most scenes. That means everyone knows what’s happening except you, so the silence only serves to deny players insight. A second playthrough (which was patched in a week after release) adds in the missing dialogue, but here’s the problem: The disjointed, dreamlike tale you weave in your head is probably better than the real story, which is saturated with awful writing and laughably strained attempts at coolness. The Quiet Man is not worth playing even one time, and understanding its terrible narrative better certainly doesn’t make it worth playing two times.

When you aren’t spacing out during wordless exchanges, you’re participating in simple hand-to-hand combat. However, even basic brawling is beyond The Quiet Man’s capabilities. You can kick, punch, grab, and use takedowns, but how you attack is largely inconsequential. Enemies are stupid and lack variety, so you can just pound them with little thought or fear of reprisal. Battles are also short and predictable, so you don’t get a sensation of building up momentum. You usually just beat up a few bad guys – all of which are lazy stereotypes – before triggering the next cutscene or briefly walking through the lifeless environments.

Even worse, fights always have something that isn’t working correctly. Enemies warp to their positions during animations, phase through objects, or stand there waiting to get hit. The controls are sluggish and unresponsive, and the camera seems determined to periodically hide your opponents. While this all frustrated me at first, I gradually became resigned to the repetitive encounters and barely functional combat, and it’s hard to be frustrated when you don’t care.

The Quiet Man’s gameplay package is sloppy and boring, and its story is so bad that it needs to be buried in a second playthrough because it’s more tolerable when you don’t understand it. I want to call The Quiet Man a farce, but farces are funny. This game is just a conceptual catastrophe that does everything wrong and nothing interesting.