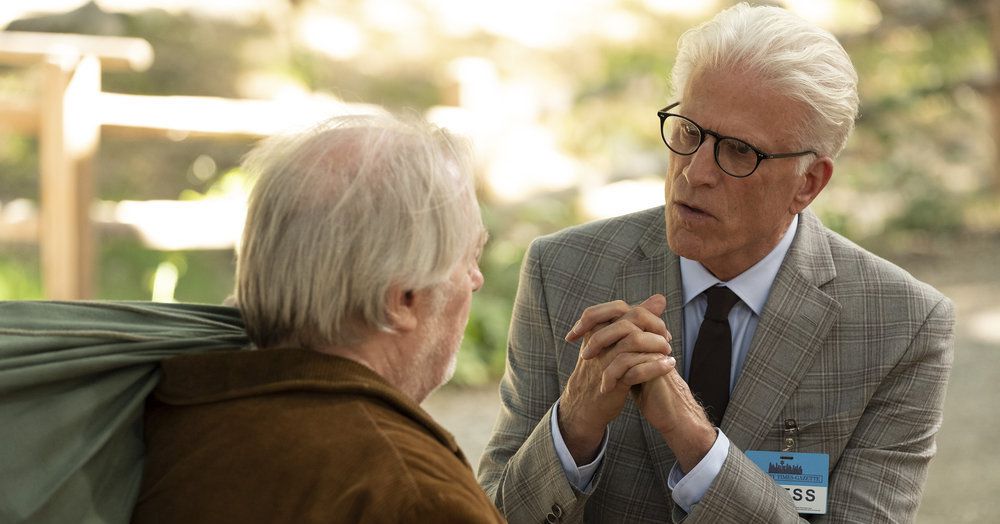 The great revelation at the end of Lost — spoilers, in case the show flew under your radar for the last eight years — was that, for a big chunk of what we’d seen, the characters were dead and navigating a version of Purgatory. Though it’s since gained a reputation for ending on a sour note, I’d argue the finale was a fitting cap for a series that was always fascinated by philosophy. So much of human ideology and belief is bound up in how to treat your fellow humans, which itself is so often tied up in what will or won’t distinguish one’s soul as pure enough to get into Heaven (or its general equivalent).

That is to say, the hat-tip that this week’s episode of The Good Place offers to Lost makes so much sense that it’s almost surprising it look this long for it to happen.

Since Lost’s airing, the season two cold open has become one of its most recognizable scenes, which The Good Place nearly matches beat for beat in “Don’t Let the Good Life Pass You By.” There’s a close-up of a mysterious stranger’s eye as he wakes, and his face remains obscured as he puts on a Mama Cass song (“Make Your Own Kind of Music” in Lost’s case, and the title song, here) and goes about his day — only to be interrupted by the arrival of strangers.

The opening is a high point of the third season thus far. The Good Place’s bread and butter is sharp-witted interrogation of ethical dilemmas, but it also traffics in twists like no other show on the air (since Lost, anyway). Just how quickly the show burns through plot devices that would, on other shows, serve as the basis for whole seasons is a testament to the series’ ingenuity, but it also means that there’s a faint concern that the bubble might burst. The season, which has seen the core cast stuck on Earth, has felt slow in way that’s uncharacteristic for a show that has, until this point, been lightning round after lightning round of afterlife-or-death choices and supernatural quagmires. Everything is finite, including, presumably, the tank The Good Place is running on.

“Don’t Let the Good Life Pass You By” makes the case that it might not be. As in Lost, in which the mystery man (Desmond Hume, named for Scottish Enlightenment philosopher David Hume) became a turning point for the direction of the series, so too does The Good Place’s Doug Forcett (Michael McKean), the person to come closest to guessing the Good/Bad Place afterlife system. Doug marks a turning point for the show’s developing sense of morality.

Since figuring out how the afterlife works, Doug has been letting the good life pass him by (and making himself miserable; filtering his own urine so as not to waste water, being a human guinea pig for clinical trials) in an attempt to ensure he’ll make it into the Good Place. Though Michael and Janet go to visit him because they figure his life will make the perfect blueprint for a good life, they’re quick to come to the conclusion that this whole season has been driving at, i.e. that the Good/Bad Place system is deeply flawed, and requires an overhaul. And if upending the show’s central mechanic isn’t a heck of a twist, then what is? It’s time to open up the hatch and see what’s on the other side.