Along with normal game play, the new update that is coming promises better anti-cheat and anti-hacker improvements as well as a new daily quests function! The daily quests promise to pay handsomely in gems and coins. As posted on their Facebook page and from responses to their Instagram posts, Swift apps is also promising they will bring in a day/night cycle to the servers as well! They are also bringing in translations to multiple languages to help people be able to talk in game, no matter what language you speak!

Many exciting things lay in store for The Wolf RPG simulator!

MaxLevelMag will be updating the look and functionality to keep up with the standards of today’s quality of websites. Due to increasing views, traffic, and attention being guided onto the website we want to move forward. Establishing of the new theme of maxlevelmag begins now, and will be done in the background. Articles will continue to be published from sources and from authors during this process.

New features will be coming with the update such as forums for subscribers with profile pages. Accounts will allow profile pictures and profile banners following basic rules we establish. These pages will allow for friends lists and other standard forum/ social website features. Creating an account and becoming a subscriber will be free for everyone who wants to join the website community. The update will improve our mobile and tablet appearance and functionality and be available at the same time as the browser website. Alongside features are being replaced or modified with the ambition of a presence amidst professionals. The update will be launched once the functionality of the new theme meets the current standards of maxlevelmag. After launch new features will come consistently all posted to the changelog.

We will have a changelog with dated posts going over the new content, in detail, of any new features after the update. We are hard at work to have these changes ready as soon as possible so do not be surprised seeing a new design for Maxlevelmag soon!

The Splatoon 2 4.4.0 update is currently available on the Nintendo Switch and it is a fairly hefty update with a number of balance changes and adjustments as well as tweaks to the Kelp Dome stage. Nintendo has detailed the full patch notes so if you are interested to see the changes that Splatoon 2 Version 4.4.0 brings then take a look below:

Nintendo has announced that Mario Tennis Aces will be updated to version 2.2.0 on January 30th. This update will have quite a few changes, including some character rebalancing and a brand new Hosted Match mode. The Court Selection screen will also be added to Free Play and Swing Mode. Nintendo has already released the official patch notes, so you can take a look down below.

Nintendo has released a new update for the Nintendo Switch‘s firmware. The console’s firmware is now at version 7.0.0. What may surprise you is that this update didn’t add any new features. However, there are 6 new New Super Mario Bros. U Deluxe icons for users, as well as some added language support. The patch notes can be seen down below.

But Mirror of Discovery isn’t the only thing Star Trek Online players have to look forward to right now. This month Star Trek Online is celebrating their 9th anniversary! To celebrate they’re bringing back the ever-popular Omega Molecule Stabilization event. Players who stabilize Q’s Omega particles can earn free Omega Particle tech upgrades as well as prize voucher which can be turned in to get a new T6 Vulcan Scout Ship as was seen in Star Trek: Discovery.

A new Personal Endeavor System is also being introduced. It will allow players to complete daily challenges to earn account-wide performance boosts. Plus, by popular demand, the Battle at the Binary Stars Event is now available as a Task Force Operation.

Also, if you enjoyed Star Trek: Discovery season 1 this is your reminder that the second season has started and the first episode is already available on CBS All Access.

Be sure to check out the trailer for Mirror of Discovery below.

Mario Kart 8 Deluxe was not the only game update that Nintendo released tonight. Pokemon Let’s Go Pikachu and Eevee also received a brand new update that brings the newest entries in the Pokemon franchise to version 1.0.1. This update focuses on bug and gameplay fixes.. We’ve included Nintendo’s official patch notes for you down below.

Nintendo has released a brand new update for Mario Kart 8 Deluxe. Once you update, your game will be version 1.7.1. This update didn’t add anything new. In fact, the only change that Nintendo made is a bug fix. As always, Nintendo released some official patch notes, so we’ve included them for you down below. If you want to, feel free to check it out.

On a livestream today Zenimax unpacked the 2019 plans for Elder Scrolls Online. These plans include Elder Scrolls Online: Elsweyr which will bring the zone of Elsweyer, the home of the Khajiit. Elsweyr also introduces the Necromancer class, 30 hours of new adventures, and a new World Event; Dragon Attacks.

Yes! Dragons are at last coming to Elder Scrolls Online they’re also bringing a year-long event with them, the Season of Dragon. It begins in February with the release of the Wrathstone DLC game pack, continues through the release of Elsweyr, then beyond into the Q3 DLC dungeon pack and the Q4 Story DLC. The Season of Dragon will connect all four updates into one massive adventure.

Elsweyr is set to launch on June 4th for PC, Mac, Xbox One, and Playstation 4. It will be available in Early Access for pre-purchase for PC and Mac starting May 20th. Speaking of pre-ordering, any current player who pre-orders Elsweyr will earn immediate access to an exclusive mount. Details about the Standard Edition, Upgrade Editions, and Collector’s Edition can all be found on the official Elder Scrolls Online website.

From the sound of it, Elder Scrolls Online has a very busy year planned. Events are already taking place in game like the Midyear Mayhem PvP event that has been running since January 10th and will continue until January 21st.

You’ll also be able to transform your Nascent Indrik mount by participating in this year’s events. Each Q1 event will give you the opportunity to buy Indrik berries. These events are Midyear Mayhem, Morrowind Celebration, Thieves Guild and Dark Brotherhood Celebration, and Jester’s Festival. When you get enough berries to evolve you’ll be able to immediately start working on evolving a new Nascent Indrik.

As is customary we got an early look at Guild Wars 2 update All or Nothing which comes out on January 8th. The following article won’t contain any spoilers for the story so if you haven’t had the chance to play yet, have no fear, you won’t see anything you don’t already know from the trailer.

Speaking of the trailer, for many of us the most exciting part of it was seeing Logan Thackeray in his shiny new Pact armor. It has a few features that will remind you of his old armor from before Heart of Thorns. As someone who is unashamed to admit she’s a Logan Thackeray fangirl I have to admit, it’s good to see him again. He can be found in the open world in Thunderhead Peaks performing several different tasks.

We’re finally getting a break from all the running around desert and tropical landscapes and heading somewhere a little more Norn friendly, the Thunderhead Peaks! Guild Wars 1 players will be familiar with the area which is of course named after Thunderhead Keep. Here you will find old Deldrimor Dwarven ruins, snow, allies from the Pact and other groups you’ve gathered along the way, and of course Branded creatures. Scattered throughout various places are very thin slots in the walls. These are far too big for a mount to get in while also being up too high or too far away from a platform for you to just jump to. Getting inside these areas requires the help of your mount along with the new Mastery skill Bond of Faith. 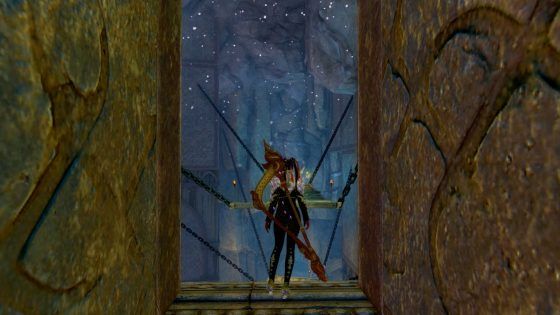 With Bond of Faith, you leap off your mount’s back and fly forwards through the air. At first glance, it seems like this Mastery skill is only useful in the Thunderhead Peaks with the special areas that contain chests full of loot. But, I can see players really getting into using it because it is genuinely fun to use. During our early look at the update, the ArenaNet developers mentioned that this had been a skill they had wanted to introduce for some time now but it took until now to find a place and a time to make it happen. Bond of Faith isn’t for a player with lag issues, however. There were a number of times during testing that I ended up missing my target. While some of this is certainly because I was only just then starting to learn how to use it the skill also seemed to cause lag once the power was activated. With a little bit of practice though you’ll be flying off your friend with ease. 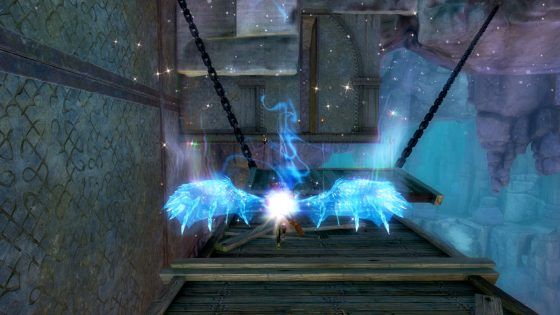 All or Nothing also sees the release of Pharus, the new legendary longbow. Going along with the theme of the episode the focus of Pharus is light. The first time you use the bow after it has been drawn you get a bright, blinding light around you, as seen in the photo below. The weapon itself is rather minimalistic. It has a few parts that move but it is generally stationary and sleek looking. I quite like the style, however, I think I would have preferred to have it as part of a Black Lion set rather than as a legendary. But, given that Kudzu is so fancy, it makes sense that Pharus is a little bit more low key. I can see this weapon becoming a favorite of Guardians who are using Dragonhunter. It fits their theme very well.

As part of this update, we have a new unlockable weapon set. Like the Stellar weapons that came out in Daybreak, the Dragonsblood weapon set has more than one level. It also has a connection to what is going on in the world which at least for me, makes it an important weapon set to get for all of my characters. Were I still as heavily invested in the game as I once was I could see myself grinding out weapons to make sure each of my 28 characters has one. But, these days I’ve slowed down a bit so a might only get 3 or 4.

Sadly we didn’t get the chance to take a look at the new tropical-themed Siren’s Reef fractal. But new fractals are always fun to run through as well as being very rewarding.

What happens in the story? Well, we only got a short glimpse of it during the press preview and I won’t be talking about that at all. What we did see lacked context and I have no idea how it ends. Which is just the way I want to be going into this.

All or Nothing launches on January 8th. If you haven’t already done so be sure to log in to get A Star to Guide Us before the launch of All or Nothing for free.