The Enthusiast Gaming Live Expo opened its doors once more in Toronto, Canada last weekend and with it Nintendo of Canada booted up its consoles for eager players looking to get hands on with their upcoming major releases. Ahead of its launch on December 7th I got to go hands-on with Super Smash Bros. Ultimate, the latest installment in Nintendo’s hit character brawlers. Drawing from its wide slew of franchises and guesting famous characters from across the industry, Ultimate is set to be the capstone game in the series combining every character and every map from across the franchise into one final installment.

Getting into demoing Ultimate was incredibly difficult at EGLX; even on the first day the lines were wrapping around the entirety of the Nintendo booth where they were also demoing Fortnite, Pokemon Let’s Go, and other several recent releases. However, I was lucky enough to jump in early and link up with a few groups of 3 for some quick versus games. Sadly, we were only able to demo the standard point-style Versus matchups.

While Ultimate will reportedly support up to 32 players, our games were restricted to 4 players and two games each. I decided to play the same two characters for all my sessions to examine the control schemes and response times throughout. Despite the wide announcements of upcoming characters for Ultimate our selection list was incredibly small between both characters and arenas. Unlike previous iterations in the series, players will be selecting their maps prior to their characters.

In my play sessions, I engaged across four different maps, with two of them being brand new. The two returning maps, Green Hill Zone and Battlefield are both graphically wonderful, the latter maintaining its Brawl design. Both have improved resolution and minimally adjusted for play on the Switch. Playing on both of them felt much more like returning home to familiar ground than simply turning a console back on.

The first new map, Moray Towers, is designed based around Nintendo’s Splatoon franchise, and very much feels reminiscent of Super Smash Bros. Brawl’s New Pork City, distilled down to a more claustrophobic size. Featuring six vertical ramps that players can jump and fall through, map dominance relies on knowing when to retreat and re-enter combat against different opponents. It was here that I first noticed how well each pixel in Ultimate jumps off the screen, making each character stand out from the background no matter how similar the color. In previous entries in the series I often found my vision unfocused, easily losing sight of my character as the match went on. On the Switch I had no such issues, homing in on my characters quickly even in the heat of the moment on large maps.

The second newer map my team played on was the Great Plateau Tower, a Battlefield-style map plucked right from The Legend of Zelda: Breath of the Wild. For fighters first spawning into the space, it simply appears as a flat battleground for the brave fighter to duel. After delivering enough damage across the landscape the tower will collapse on itself, the domed roof collapsing to reveal an additional platform. Mastering dodging early in my Smash career, that was the key to taking command of the Tower. Much akin to Brawl’s Pirate Ship room to fight is hard to find, and relies on a player that can think outside of the box until the walls come tumbling down. 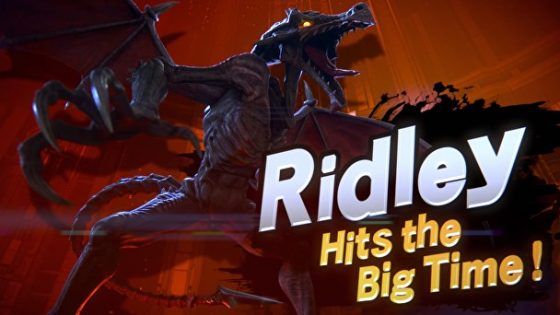 I first played as Ridley, the infamous Space Pirate Commander from the Metroid series. Like every other character in Ultimate Ridley does have a swappable color palette, though Prime fans will be disappointed by the lack of a Metal Ridley variant. Instead his shaders are far more reminiscent of his various states of damage across the 2D entries in the series, particularly from Metroid Fusion’s X-Enhanced Ridley. He is one of the largest characters seen to date in the franchise, standing almost 4 meters in combat, double the length of Mario.

Being one of the larger characters on screen the nefarious space-dragon walks along at speeds more reminiscent of Bowser; slow and menacing like a great monster but not so slow as to feel left out of the action. This does not mean Ridley is a slower character by any stretch of the imagination, while his melee abilities are indeed slower and more devastating, several include a distinct sweet spot which multiplies his damage when unleashing attacks at the appropriate time. He can also rapidly fly across the arena, grabbing opponents for unique aerial combat and unleashing devastating combos while grinding his opponents into walls and floors. While he does feature a handful of ranged abilities these are not his bread and butter but are instead when he’s at his most vulnerable.

In charging his ranged attacks Ridley cannot hold a leveled charge like fighters such as Samus can. Instead his abilities must be charged and unleashed at the same time, filling areas of the screen to devastating effect. Much like smaller character such as Jigglypuff, Ridley can also take flight for several moments, flapping his wings repeatedly to gain altitude. His recovery move is incredibly reminiscent of the Star Fox fighters, hurling himself in any direction with a burst of dark energy. His Final Smash, however, is one of the coolest animations I’ve seen in the series. 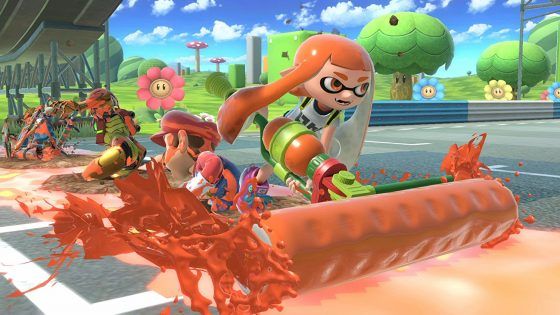 Pulling any opponent in melee range, Ridley hurls them against Samus’ ship in an Injustice: Gods Among Us style cutscene. With a roar he unleashes a devastating Omega Beam, potentially blasting all of them off of the screen in a blaze of glory. While the entire animation only takes perhaps five seconds, each moment it plays out is utterly breathtaking and, for the players lucky enough to escape my wrath, incredibly awe-inspiring. Every Final Smash feels that way, even those without pre-rendered cinematics (such as Samus’ Hyper Beam) leave a distinct impression of power on the screen, and make effective usage not only devastating to opponents but jaw-dropping to watch.

Stepping into Kirby’s colorful shoes, I decided to take up the pink fluffball of terror to best test the game’s updated physics and tools. Kirby still feels fun to use and abuse, from swift dodges and devastating speed-punches to just sucking up opponents and ejecting them off of the sides of the arena. On a basic level the physics and controls for Smash Ultimate feel incredibly good, even the ability tuning is perfectly reasonable, such as Kirby’s A-Button combo now limited in its hits. Past the basics, however, thing begin to slip in quality.

Each station was restricted to using a Nintendo Switch Pro Controller which most players will find more than appropriate for Ultimate’s control scheme. In using a multitude of these controllers (on one occasion requesting a swap-out for a fresh one), controls in combat feel intrinsically stiff and restricted in comparison to other entries in the Smash franchise. Changing directional attacks mid-air, like Kirby’s Recovery attack, cannot be done within so many frames of animation of the attack. Such is the same with advanced moves like wavedashing from a stand-still being nearly impossible. Some of these difficulties are due to the increased latency in animation gaps, points in time where there is a gap between certain animations and their actions where players can influence character movement.

It is during these moments that advanced and pro players execute some of the game’s more difficult and previously unintended techniques, rapidly crossing the arena through minimalistic air-dashes or avoiding attacks with split-second dodges that players first taking up the game would gauge as impossible. Despite these frame gaps being larger than in Smash 4 and Brawl, these techniques are still noticeably more difficult to pull off in play with characters built for it. In discussing this with other members of my group (several of which were experienced Smash tournament veterans) they also expressed a stark disappointment at the sheer difficulty in managing these extra abilities. With Game Director Masahiro Sakurai’s previously negative comments about Smash Tournament play to The Guardian, these massive adjusts do feel as if they are intentionally purposed to an extent, which may see tournament play firmly remain with Melee as its strongest showing.

The rest of my time with Ultimate was enormously fun in experimenting with combat and items. The default spawning rate of items in this iteration feels fantastic, with new additions appearing every ten to fifteen seconds and in wide variety. Over the course of one match we had several Poke Balls and weapon items drop in, and none felt obtuse or distracting during match play unlike previous Smash installments. Each item was also incredibly fine-tuned, and we didn’t feel the need to start scrabbling for anything at the cost of our own fights. Everything felt fair to use and be hit by; there was no real moment where I was angry about a cheap Pokemon spawn or an overpowered weapon hit.

All in all, I feel remarkably confident about the home market for Super Smash Bros. Ultimate. While I am incredibly concerned about its potential future for tournament play, this is certainly the ultimate addition to a Smash fan’s collection. With a current confirmed roster of almost 80 characters and zones this will indeed be one of the greatest additions to your Nintendo library for sheer value alone. You too can add it to your collection on December 7th.