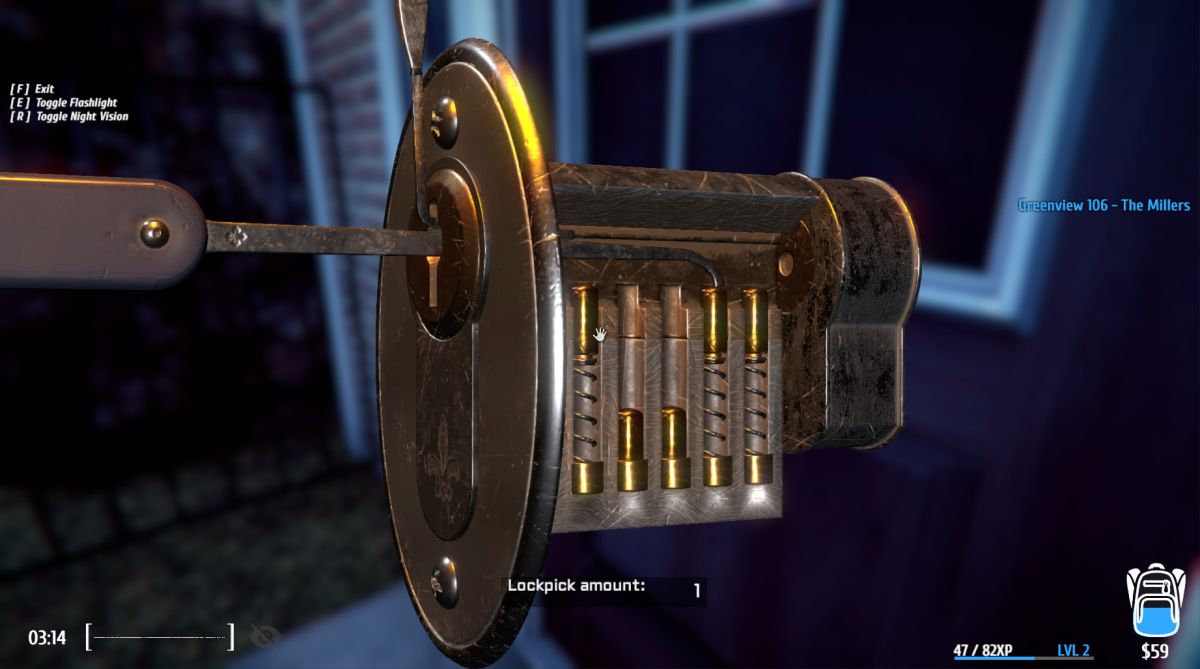 I’m worried about the mafia, and not for the usual reasons. The mob sprung me from prison so I could become a thief for them, but I just don’t have a lot of confidence in organized crime when it lacks so much basic organization. For example, my contact Vinny first sends me to rob a house at 108 Greenview Street. My second assignment is to rob 109 Greenview. Then 110 and 111.

Hey, Vinny, not to sound ungrateful for the work, but is it really a good idea to burgle consecutively numbered homes on consecutive nights? If the local cops have a brain they’ll just set up shop at 112 Greenview and wait for me to sneak in the back door. Luckily for me, in the first-person burglary game Thief Simulator, the cops don’t have much of a clue. Nor do the homeowners or neighbors. And the thief I’m playing might not be the sharpest knife in the drawer, either: he logs into his computer as ‘Thief321’.

I begin as a real no-talent pilferer, using a crowbar to smash through fences and break windows, but as I start stealing things from homes like saucepans and old toasters, I earn a little money by selling them at the local pawn shop. I spend my meager take on basic lockpicking tools, and spend my skill points on the ability to use them. Level one lockpicking is taken directly from the Fallout games (bobbypin and screwdriver) and Level 2 is the tumbler-tapping game from Oblivion. I’m guessing the developer of Thief Simulator, Noble Muffins, is a fan of Bethesda RPGs.

I have a little thief hideout with a couch to sleep on (to move the clock forward) and a computer to visit several thief-friendly websites. There’s one to buy burglary tools, one to sell specific stolen goods for more cash than the pawnshop pays, and one to purchase tips about the houses I’ll be robbing, such as when the owners aren’t home and what security features their house has. Some houses are quite well protected, with cameras and alarms, and I’ll need to level up by stealing a whole lot of kitchenware from the crummier houses first.

I don’t really like buying tips, though. Half the fun of Thief Simulator is getting into my car, cruising around the neighborhood, and casing the joints myself. Peering in through a window and marking a resident gives you insight to their routine: when they’re home and when they’re not. And if things go wrong on a burglary, you can always hide in a closet, in a Dumpster, or under a bed until the police decide they’ve done their job of briefly looking for you at eye level.

Thief Simulator isn’t all about thieving, either: on one of my first jobs, the mafia sends me to a house to break someone’s toilet with a crowbar. Apparently, the mafia tried to sell this family a new toilet, but the family was like, no, we are happy with our current toilet. And the mafia was like, we run the toilet racket in this town!

Like I said, I’m a little worried about the mafia.

In fact, Thief Simulator is as much about damaging property as stealing it. My computer has a webpage called Rent-a-Thug (I login as Thug322, which is at least slightly more clever than Thief321) which is full of jobs that require just smashing things. Someone is willing to pay me hundreds of dollars to break into a house just to smash some dishes, or a sink, or a TV. It’s good work because while I’m there I can steal any cash, alarm clocks, guitars, wine bottles, and whatever else I find, but what the hell is happening in this neighborhood? No wonder there are some many residents walking around at night: their homes are full of shattered dishes and broken sinks.

Speaking of pedestrians, they aren’t particularly on the ball, either. They’re pretty good at spotting me doing something suspicious like crouching near a window in broad daylight or carrying a TV out of a house, at which point they’ll call the cops immediately. But park a car on the sidewalk and they’ll just line up and wait helplessly for eternity, unable to move. “The sidewalk is blocked. I guess I’ll just slowly die here. No point in going home to my broken toilet and missing saucepans anyway.”

Despite the terrible AI, I sorta like Thief Simulator. It’s consequence free—if the cops do manage to catch you, it just reloads the last checkpoint—and it’s fun sneaking around in darkened houses opening drawers and filling your pockets with whatever crap you find. I’ve now learned how to climb lattices and I’m hoping when I’ve completed a few more jobs I’ll have earned enough to be able to disable cameras and alarms and start making some real scores. There are some big, expensive-looking houses on this street. I’ll bet they’ve got some really big, expensive toilets, too. At least until I’m done with them. 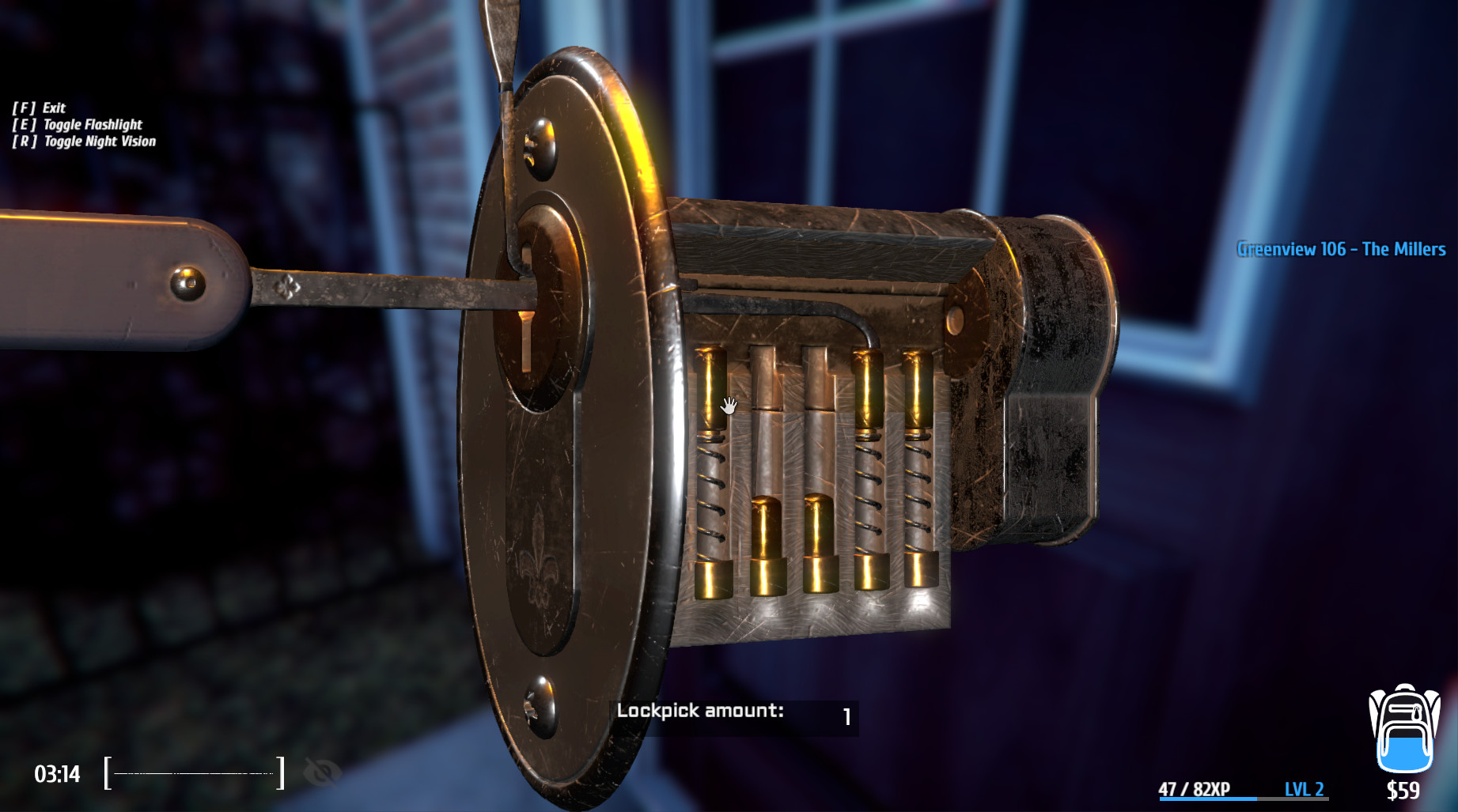