SpongeBob SquarePants: Battle for Bikini Bottom – Rehydrated revamps the graphics and design of a cult classic

SpongeBob SquarePants: Battle for Bikini Bottom – Rehydrated revamps the graphics and design of a cult classic

Since its original release in 2003, SpongeBob SquarePants: Battle for Bikini Bottom has gone on to become a cult classic. The 3D platformer steadily accrued a passionate following in internet circles and even became an unlikely breeding ground for lightning-quick speedruns. Nearly two decades later Purple Lamp Studios and THQ Nordic have set out to remaster, or rehydrate, the game with updated visuals, tweaked game design, and new content.

We interviewed THQ Nordic Producer Martin Kreuch to see how the company is improving upon the original with Unreal Engine.

How are you trying to update SpongeBob SquarePants: Battle for Bikini Bottom – Rehydrated, while keeping what fans loved about the original?

It was very important for us to keep the abundance of distinct gameplay moments in Battle for Bikini Bottom, which is still one of the most varied platformers out there. Each level has a distinct look and feel, and often adds some unique gameplay mechanics to support this. You have three playable characters–SpongeBob, Patrick, and Sandy–each with a unique set of skills. Other than that, the biggest challenge was simply to do justice to both one of the greatest animated series ever and arguably the best game based on the franchise.

Since the original game is still very fun to play, we focused on the details that would make it feel like a modern console game. This involved tweaking the camera, the movement, and dialogue animations, and implementing a lot of ease-of-use features, like [including] a modern saving system, for example. 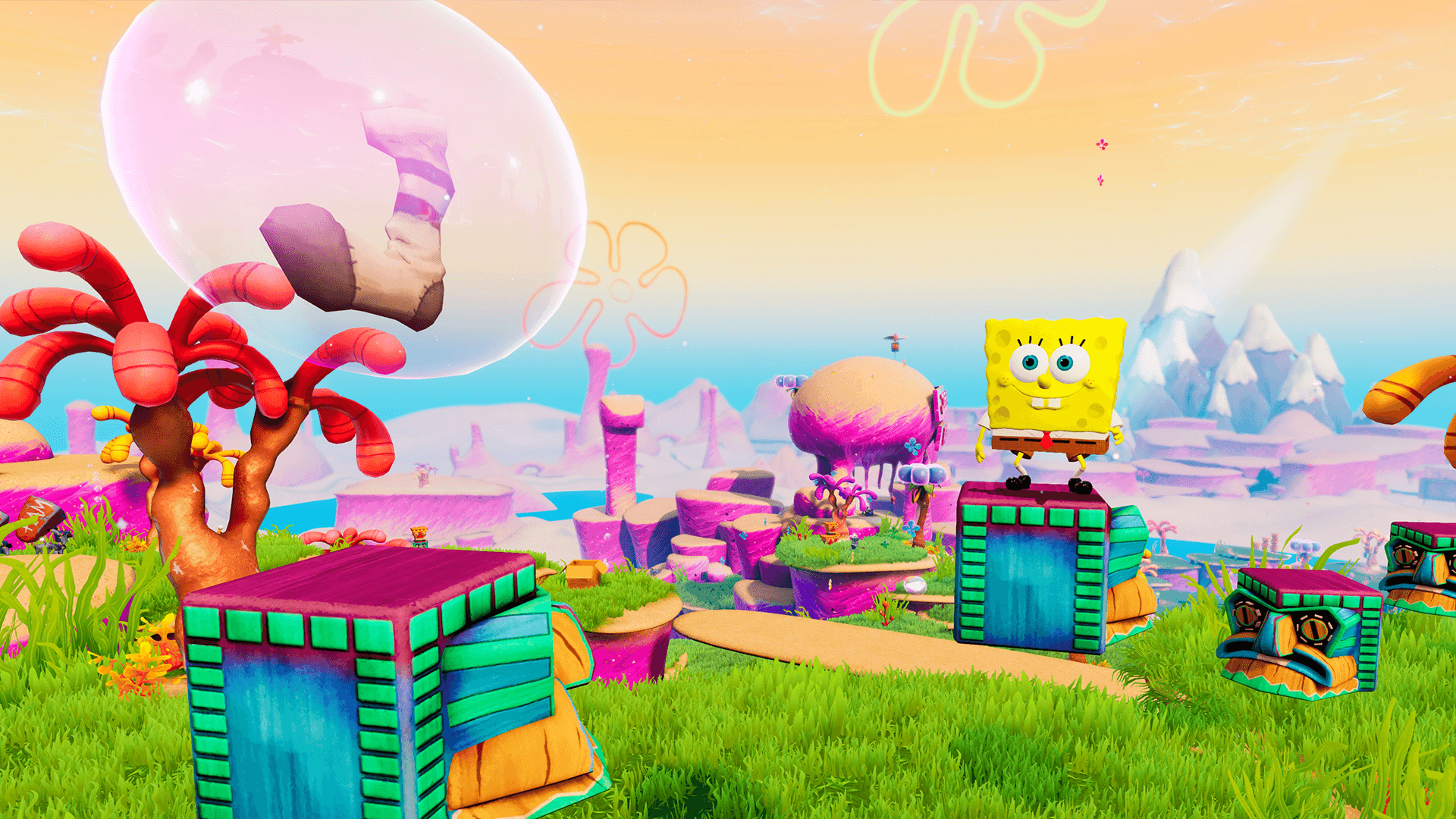 With the original having such a strong cult following, how important is community feedback to the development of the game?

Being fans of the game and series ourselves, staying faithful to the original was our prime objective. At the same time, we wanted to make sure we don’t replicate some of the old frustrations from the PS2 era. We aimed to build the game according to how fans remembered it–[recreating] that feeling of playing a wacky, fun platformer in a beloved underwater world.

In addition, Battle for Bikini Bottom has a vibrant speedrunner community. After showing the game for the first time at Gamescom 2019, SHiFT, one of the most prolific speedrunners of the original game, was kind enough to visit our studio in Vienna. This way, the team had a chance to tap into his insights, which consists of playing numerous hours of the original game, to get an understanding of all the little tricks and shortcuts that are easy to miss. 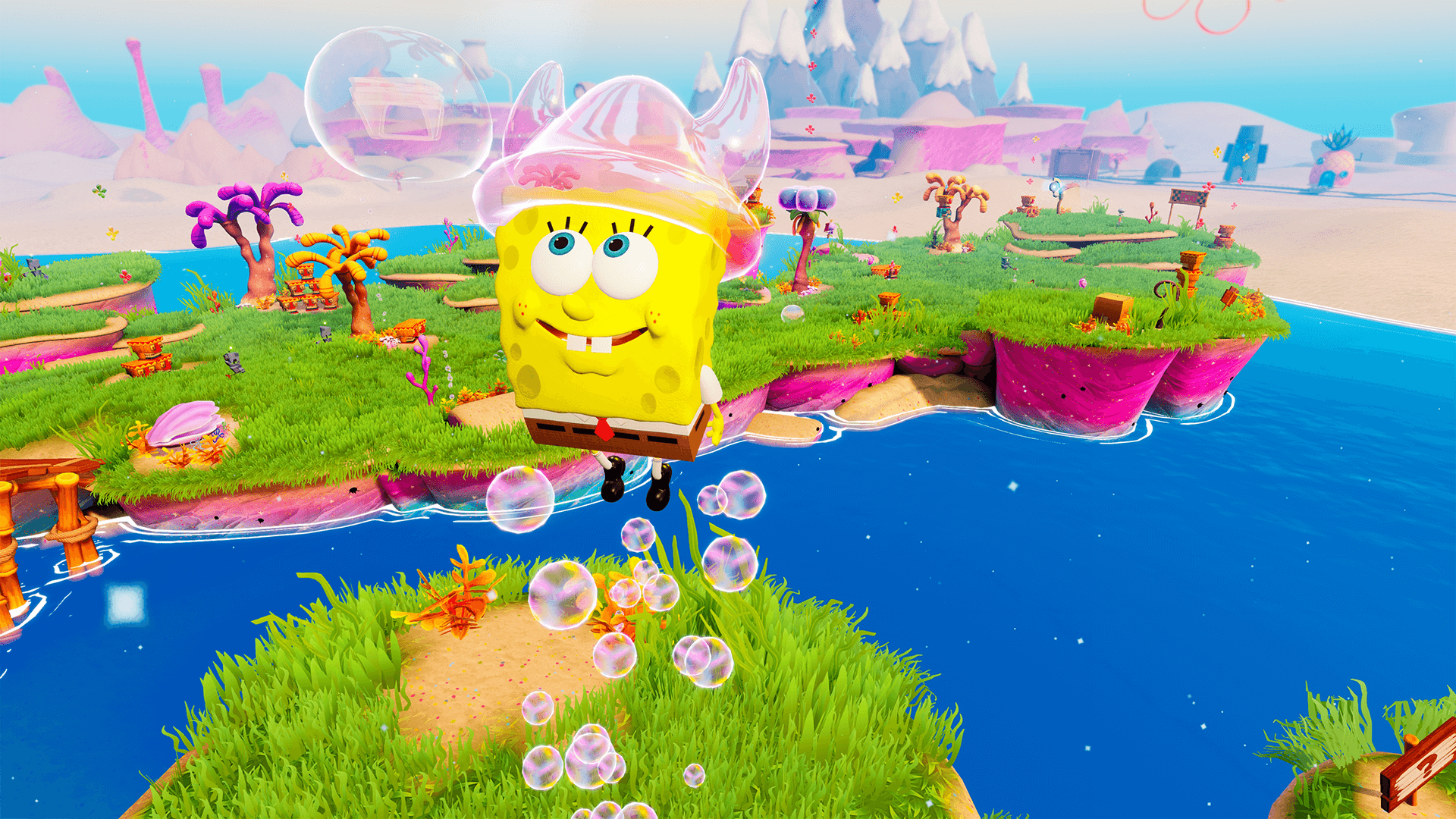 Rehydrated includes content that was cut from the original as well as new content such as a multiplayer mode. Can you elaborate on your decision to implement these new elements?

It really came from our research into what fans of the original were hoping for. For example, the concept art for Robo-Squidward was unlockable in the original game, and fans have been wondering how this fight would have looked like if it had made it into the game ever since.

The multiplayer idea stems both from the long history of SpongeBob party games and the fact that the series has fans from across all age groups. It’s a series for everybody, and we wanted to offer a simple, easy-to-pick-up multiplayer mode for fans to enjoy together.

Are there any other remasters or remakes that you used as reference points?

Our primary influence was the original game, but we also looked at great remakes like Spyro Reignited Trilogy and the Crash Bandicoot N. Sane Trilogy, as well as genre-defining games like Super Mario Odyssey.

On top of that, at THQ Nordic, we have a strong dedication to bringing back classic games, both as HD remasters or, as with Battle for Bikini Bottom – Rehydrated, as full remakes. This experience is, of course, helpful in supporting Purple Lamp to create their new vision of the SpongeBob classic. 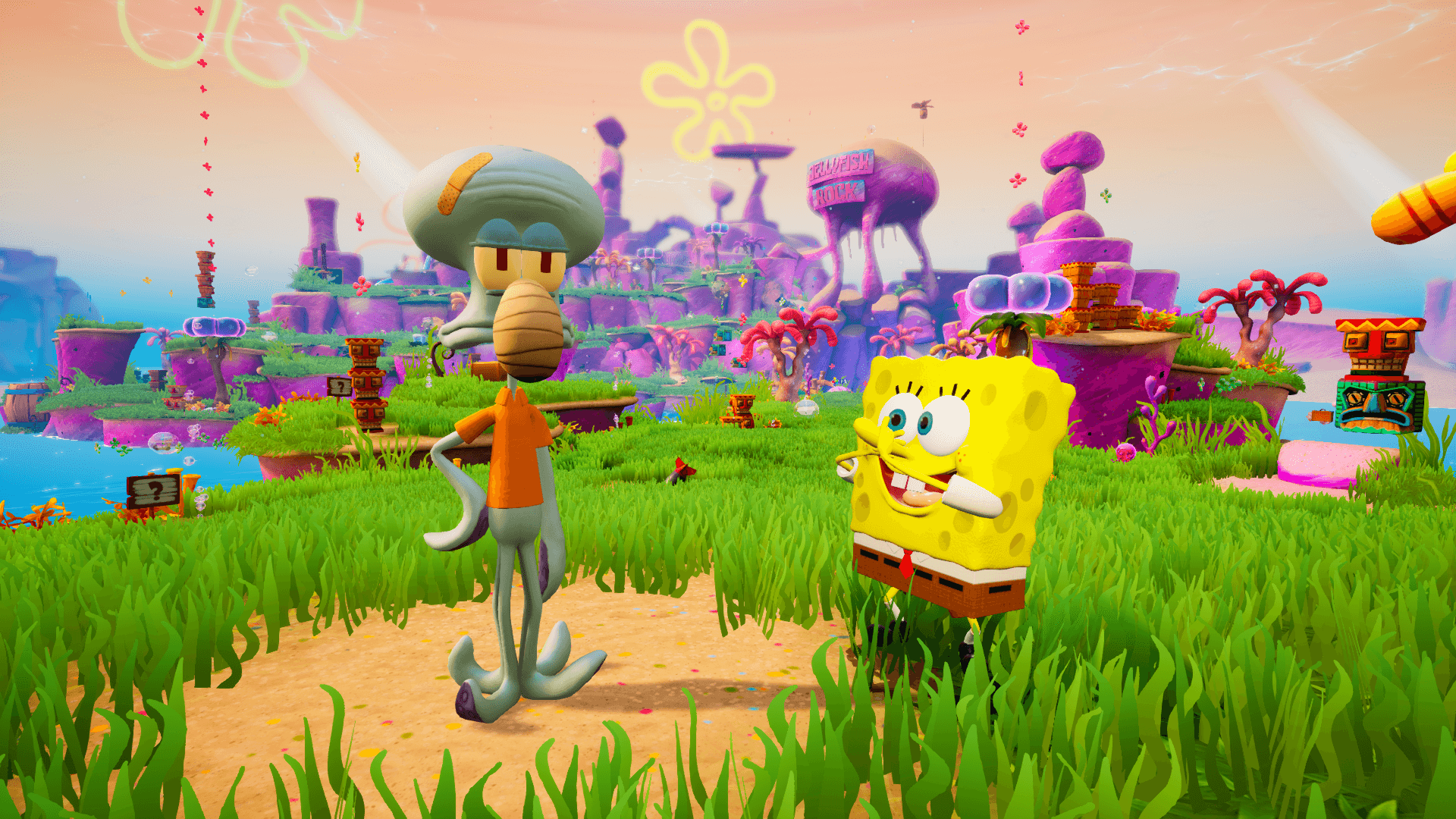 Spongebob is an incredibly iconic franchise with fans young and old, and it comes with a very specific and surreal brand of comedy. How did you approach injecting these comedic elements into the game?

We are lucky to be working with an original that was created during the golden age of the SpongeBob franchise. It’s full of legendary dialogue by a wide range of characters from the series. Every fan has their favorite one-liner; it’s a lot of fun seeing them pop up in the comments section of videos on the game.

Aside from that, we are now in the position to really support these lines of dialogues and the overall craziness of the game with high-quality animations. So, I wouldn’t say we added a lot of comedic elements, but we mainly brought out the existing ones and allowed them to shine. We did add new idle animations, though, which are the movements the playable characters do when they stand still for a while. This was done to reflect some meme-able moments that happened later in the series and was a lot of fun to make.

Considering SpongeBob SquarePants: Battle for Bikini Bottom – Rehydrated is one of Purple Lamps’ first games, what was the team’s familiarity with Unreal Engine like going into development?

The team in its current form is relatively “fresh,” but many members have worked together before or have had lots of experience in the gaming industry.

As for UE experience, the team had prior experience developing PVP action-multiplayer game MisBits and got additional knowledge and support from a colleague who worked with Unreal in the architectural visualization industry. 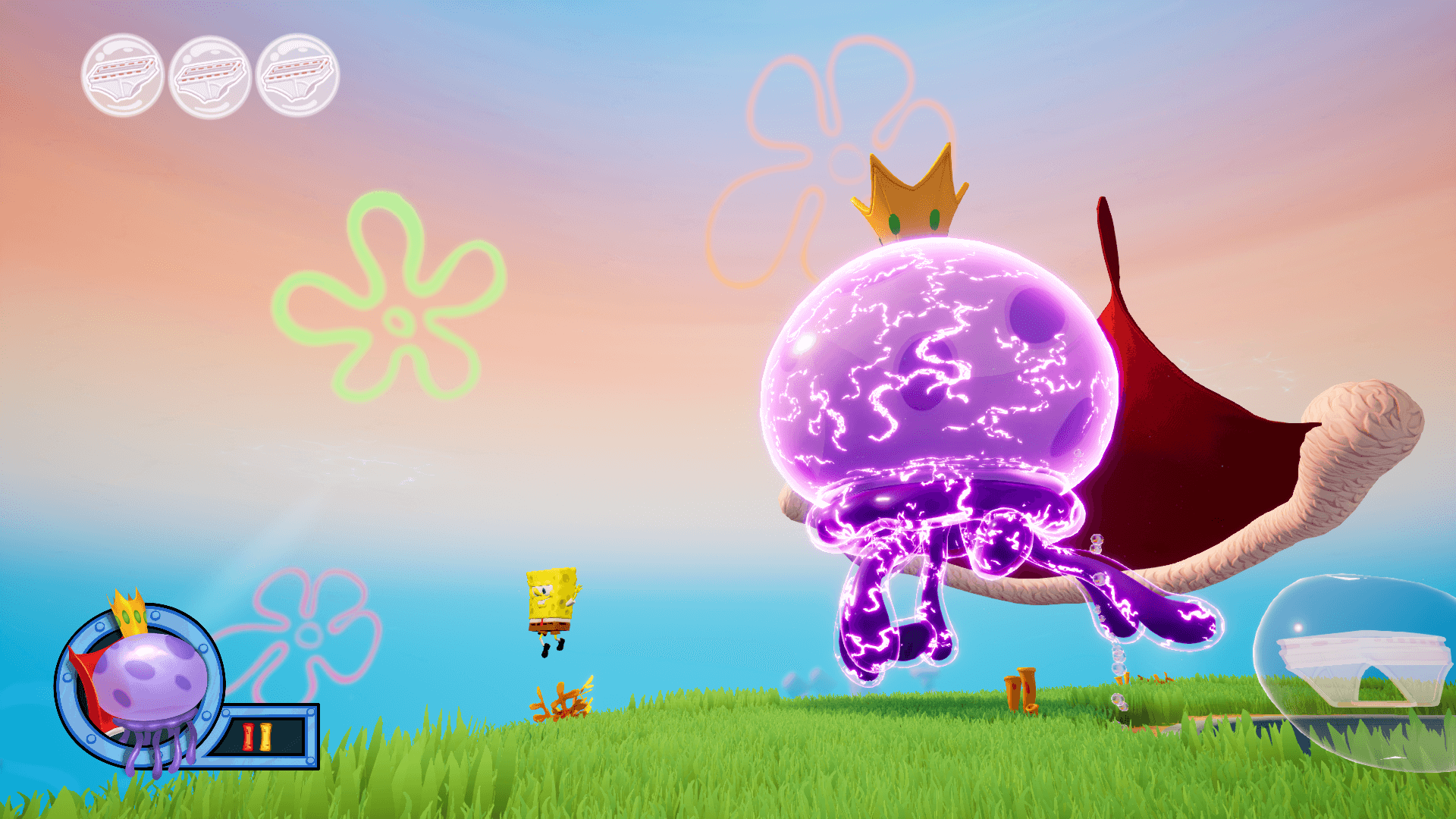 How did the team leverage Unreal Engine to modernize the game’s graphics, while also using the cartoon as a reference point?

We collaborated closely with Nickelodeon on the art style, who guided us with their unparalleled insight into the SpongeBob franchise. In addition, Unreal Engine gives us a much higher visual fidelity than the original.

On the more technical side, the profiling and visualization tools offered by Unreal Engine 4 provide many ways to identify otherwise hard-to-find performance bottlenecks. In that regard, the engine also includes an easy-to-use LOD creation tool to optimize geometry that’s far away from the player. Our team also uses the Material Editor to create the game’s unique look and its stylized effects.

Precise jumping mechanics coupled with well-designed environments are vital for any action platformer. Are there any ways the team is using Unreal Engine to ensure the gameplay feels good?

The [default] Unreal camera setup for a third-person character was a solid starting point for our camera development; additionally, the article, “Six ingredients for a dynamic third-person camera,” from Daedalic Entertainment was of great help to us. 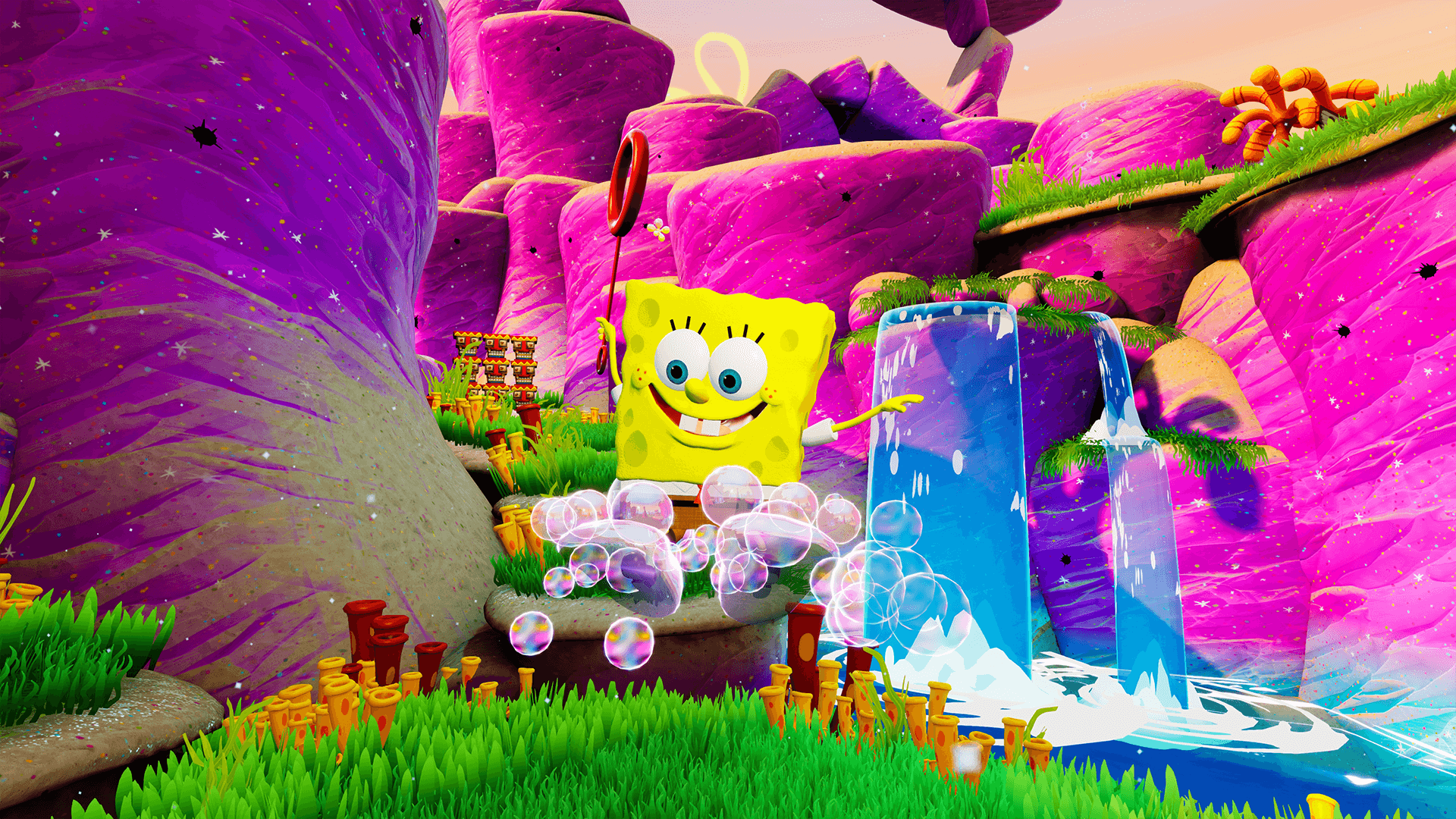 What is one thing you would like to let fans know about the game as it heads towards release?

Thanks for the wave of support and enthusiasm that drives us to work every day! We can’t wait to put this very special game in your eagerly waiting hands!