Founded in 2011 in Uppsala, Sweden, Quixel has a very simple mission: to capture the entire world. If those words conjure up images of rampant imperialism, rest assured that what Quixel means by this is building a CG asset collection of everything that exists in real life. That’s a lofty goal, but the company is well on its way, and despite its relative youth, is already the owner of the largest and fastest-growing library of scans in the world.

Not just any scans. The Megascans library boasts some of the most high-quality, photorealistic assets you’re likely to come across. “We’re incredibly nerdy about quality, and so we have these internal pipelines that allow us to capture an insane amount of detail,” says Quixel’s Co-Founder and CEO Teddy Bergsman Lind.

In order to put their products to the test, the team at Quixel recently decided to embark upon their own cinematic 4K short-film project, but with a twist—this one would be rendered in Unreal Engine.

“We wanted to help prove that photorealism is now actually possible in real time, but also that it’s incredibly simple,” says Bergsman Lind.

The project, entitled Rebirth, set out to leverage the data acquired on a month-long scanning trip the team had taken to Iceland in 2018. The production team consisted of three former game artists, a VFX supervisor, and an architect who took on the role of art director.

“My initial reaction was ‘you’ve got to be kidding me!’,” says Creative Director Dan Woje. “We’re not a production company, we do not have a pipeline. I come from a CG background and just knowing everything that it takes to pull this off, we don’t have that. But […] we have some incredible talent. They were able to get the assets in the engine, get some really basic lighting in there, and it was just working.”

Woje was not alone in his initial trepidation. “Going into this, I was actually terrified because I had never done these huge-scale environments or archviz-style interiors/exteriors, which rely heavily on lighting and atmospherics,” says Lead Artist Wiktor Öhman. “But the features in Unreal—such as the volumetric fog and lighting and all that kind of stuff—just made it super easy to use.”

“All the tools in Unreal are so approachable and easily accessible,” he continues, citing the example of a shot that appeared late in the production where the viewer is inside the cockpit of a futuristic vehicle speeding through the environment, and you see a pulsating, bleeping EKG monitor. “Using the tools like that, especially the material editor in combination with the Blueprint editor, I think I had a first draft of that shot done in seven hours,” he says. 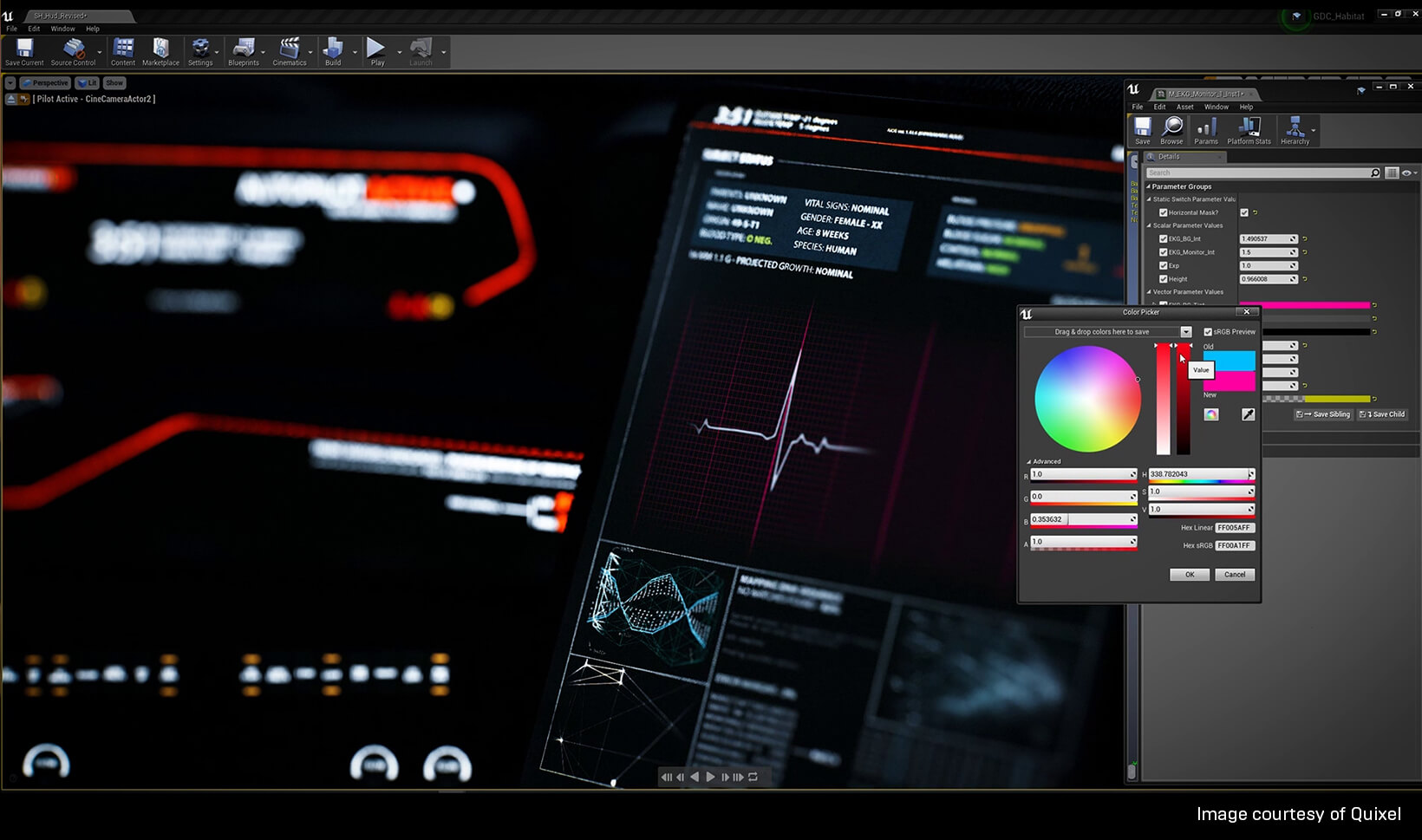 In fact, for every single shot, the team was able to achieve about 90% quality in a single day. Each shot was handled by a single artist, including set dressing, lighting, VFX, fog cards, and even post-processing effects like film grain, chromatic aberration, and vignetting.

“The shots were looking so incredible and so high-fidelity that we had to make sure that the cameras felt real,” says Woje. “We hired someone that created a rig that was motion-captured, so that we can essentially make a virtual cameraman inside of our scenes. We even went as far as, he was just holding the rig, and his heartbeat was driving the movement.” 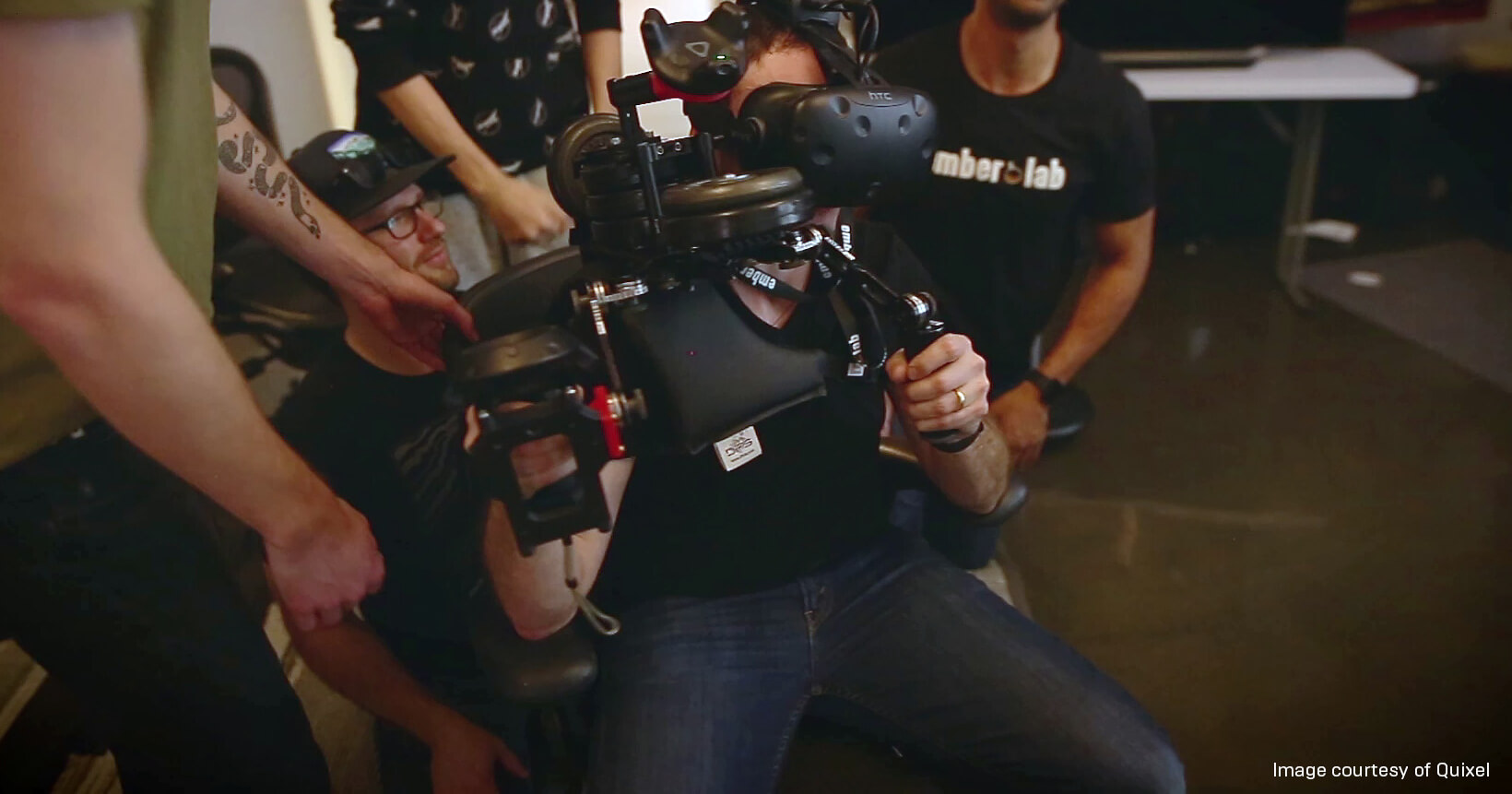 The piece is a huge success, garnering over 1.7 million views and overwhelmingly positive feedback on YouTube to date. Not only is it a beautiful short film, but the fact that the world they built is fully interactive is hard to believe. What’s more, everyone on the team came away feeling that they had learned something, and with a lot of excitement for the future of real-time rendering.

“The process of me learning a new pipeline, learning how this can be achieved, has been an incredible experience,” says Woje. “My eyes are open to the power of working in real time and I can genuinely say—and I don’t think I could have said this a couple months ago—I’m excited for the next one.”

The team was even magnanimous enough to share what they’ve learned in an in-depth tutorial, which is also receiving extremely positive feedback. The techniques it reveals have applicability to anyone looking to create photoreal real-time deliverables, regardless of the industry they’re in.

“Our key takeaway from this is that real time is the workflow that will allow all 3D industries to ultimately converge,” says Bergsman Lind. “Everyone will be leveraging this toolset.”

Want to get ahead of the pack? Download Unreal Engine today, and start realizing your projects in real time.