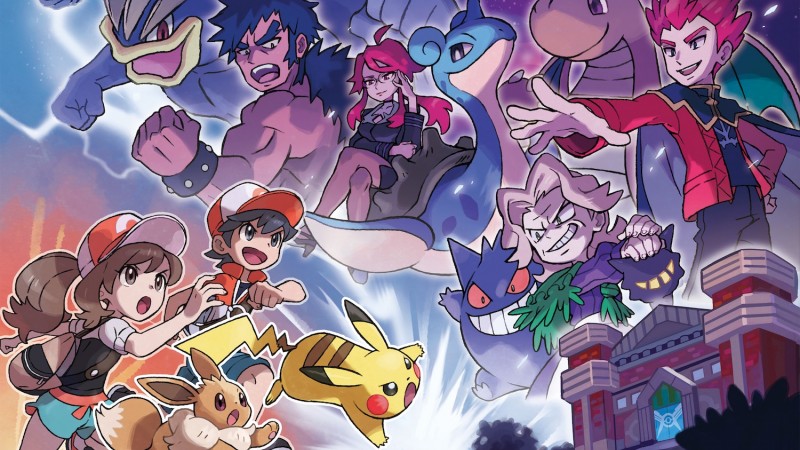 After two decades on dedicated handheld platforms, the Pokémon franchise is finally relocating to the big screen. While we wait for the first full-fledged RPG to hit Switch, Pokémon: Let’s Go Pikachu and Let’s Go Eevee are remakes of the first generation of the series with modern graphics and updated gameplay. Exploring Kanto, building your team, fighting Team Rocket, and challenging gym leaders remains as thrilling as it was 20 years ago, but inconsistent motion controls ensure the transition to Switch isn’t seamless.

Let’s Go pulls you in with the same hooks as every other Pokémon game: You travel the region, collecting Pokémon, battling trainers in fun, turn-based combat, and earning your place in the Pokémon League in a lighthearted adventure. The series mantra of “Gotta Catch ‘Em All” holds true to this day, as finding a ton of unique monsters remains rewarding as you fill in your Pokédex and build your dream party.

Let’s Go remains faithful to the first-gen Pokémon games (specifically Yellow). I knew exactly where to go to complete optional quests, and still remembered the solutions to most puzzles. Despite being remakes, the Let’s Go games effectively move the Pokémon franchise forward with crisp visuals that recreate the familiar creatures and cities of the Kanto region. Seeing the battles play out how I originally pictured them in my head is a thrill. In addition to upgrading the visuals and sound, Let’s Go streamlines many of the more tedious elements of the original games.

Despite tasking you with exploring a faithfully recreated version of Kanto, a few surprises and tweaks keep the experience fresh. From riding Pokémon for faster travel to swapping your party on the fly without having to visit a Pokémon Center, myriad modern conveniences make these remakes feel right at home in 2018. Let’s Go isn’t challenging, but if you need an extra hand, a second player can shake a second Joy-Con to drop in and out of local cooperative multiplayer. This updated approach is further demonstrated in Let’s Go’s modern evolution of one of Pokémon’s oldest conventions: wild Pokémon encounters.

Not only are random encounters gone (now you see wild Pokémon roaming in the map), but you no longer must battle wild Pokémon to weaken them prior to catching (with a few exceptions). Instead, you simply flick your Joy-Con in their direction to land as accurate of a throw as possible – no battling necessary. Some players may miss having to weaken wild Pokémon you intend to catch, but after the initial shock of the simplification, I appreciated how it kept the pace of the game up. Not only does this separation make wild encounters feel distinct from trainer battles, but it makes the few wild Pokémon you do need to battle first feel special.

However, the motion controls for catching Pokémon, whether you’re using a Joy-Con or the Poké Ball Plus peripheral, are unreliable. On multiple occasions, I flicked my controller directly at the screen, only to have the ball sail in the wrong direction. Playing in handheld mode tones down the motion controls; you just aim with the gyroscope, then press a button to throw a ball. This makes handheld mode the best way to play Let’s Go, effectively deflating the excitement of the series being on consoles for the first time.

While you can find rare Pokémon in places you couldn’t before, other avenues of collecting uncommon species have been removed. You can now use lures to draw out rare Pokémon, but I’m disappointed the Game Corner no longer lets you play for items and Pokémon. My personal favorite, Safari Zone, has been replaced by Go Park, which lets you connect your Let’s Go save file with your Pokémon Go account.

Using Go Park, you can transfer previously captured Gen 1 creatures from Pokémon Go into Let’s Go. I love being able to move Pokémon from the mobile title into the Switch game, allowing me to further fill in my collection. After that, you enter Go Park and encounter these Pokémon as you would normally a wild Pokémon – you still need to toss a few balls at them to add them to your team in Let’s Go. While I enjoy this integration, I still miss the surprising nature of Safari Zone encounters, and I’m disappointed you can’t transfer Pokémon back to Pokémon Go once you’re finished. I hated losing my shiny Charizard in Pokémon Go so I could have him in Let’s Go. Also, if you’re hoping to start your playthrough with a full team of awesome monsters from Pokémon Go, you may be disappointed as you can’t use this functionality until you’re in Fuchsia City in the latter portion of the story.

Even if you’re not interested in the Pokémon Go integration, Let’s Go adds multiple reasons to keep playing after you finish the story. Throughout the adventure, you encounter coach trainers that put up a stiff challenge and reward you with move-teaching technical machines and stat-boosting items. Once you defeat the Elite Four at the end of the game, master trainers appear to put a specific Pokémon to the test. If you think your Charizard, for example, is better than the master trainer’s Charizard, they serve as an awesome challenge. While these special types of trainers are among the most difficult in the game and sometimes give you good rewards for beating them, the most meaningful reason to keep playing is to continue filling in the holes of your collection, with Mewtwo serving as the ultimate post-game addition to your collection.

Pokémon: Let’s Go, Pikachu & Eevee are strong remakes of the original games. The feeling of amassing a giant collection of monsters and customizing your team never gets old, and the timeless turn-based combat is still fun to this day. Shoddy motion controls aside, Let’s Go is a great time whether you’re a die-hard fan or a newcomer to the series.