NFL RedZone is a live weekly program produced by NFL Network during the NFL regular season. Every Sunday afternoon, viewers are treated to live look-ins and commentary on all the NFL (National Football League) games happening that day, including every touchdown and other memorable plays.

The show, which has aired during every NFL regular season since 2009, is a hit with fans, especially those involved in fantasy football leagues. Instead of endlessly flipping channels, viewers can essentially watch all the games at once on NFL RedZone. 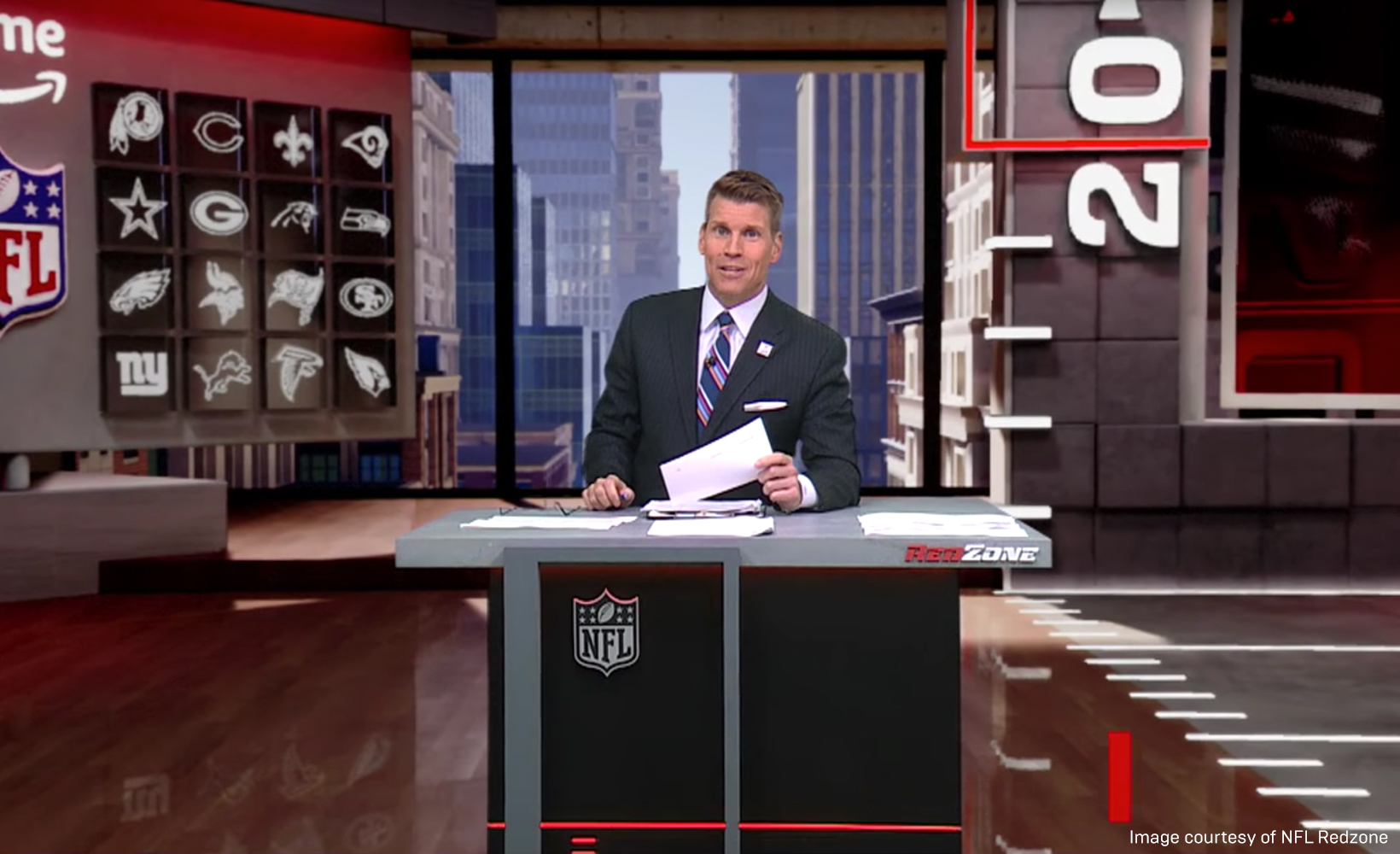 Host Scott Hanson gives live commentary from behind his desk on a green screen while the show highlights all of the games that are in the red zone (near the goal line). As Hanson gives his commentary, Ross Furio cameras move around the set and the camera’s position, rotation, and zoom data get sent back to Unreal Engine to update the view of the virtual set in real-time, all while the show is broadcast live to viewers.

While NFL RedZone has always aired live from a virtual set, this year the production team decided to upgrade to the superior real-time rendering offered by Unreal Engine. The show’s fresh new look debuted in late August of 2018 with preseason coverage, and has continued throughout the current season. 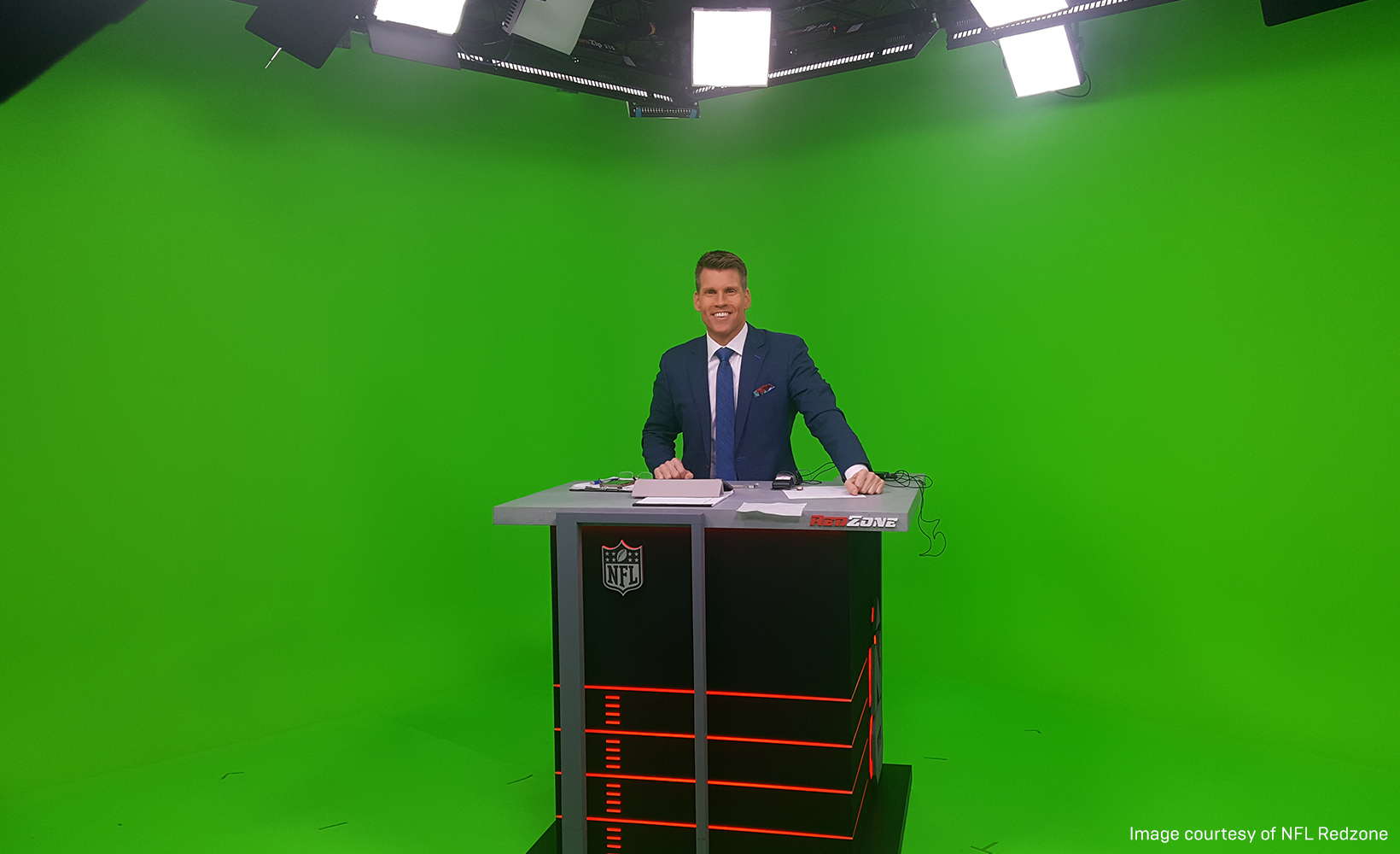 NFL Network’s Real-Time Systems team first became aware of Unreal Engine’s rendering capabilities at the annual National Association of Broadcasters (NAB) conference. “We saw what exhibitors were doing with Unreal, not just for sports coverage but for all kinds of executions using real-time rendering,” says Patrick Lee, Director, Real-Time Systems at NFL Network. “This signified to me that there had been a change in the marketplace for virtual sets. It became clear that Unreal could visually and stylistically give us much better results than the solution we’d been using.”

The graphics team, led by Creative Director Carlos Aguero and Art Director Mario Vengoechea, redesigned the set and outsourced the building of the Unreal Engine project for real-time use. Starting with the 2018 season, an operator in the NFL RedZone control room uses built-in Unreal Engine Blueprints every week to update the current NFL Standings, highlight any NFL initiatives in the video wall, and swap out the set’s wall posters to reflect the top playmakers of the week.
“We’re really excited to bring this viewing experience to our audience,” says Lee. “With Unreal, the set provides much more depth. Scott (Hanson) is virtually orchestrating the show from a downtown loft with huge windows and shiny hardwood floors. Lighting is streaming in from outside and from various objects on the set.” 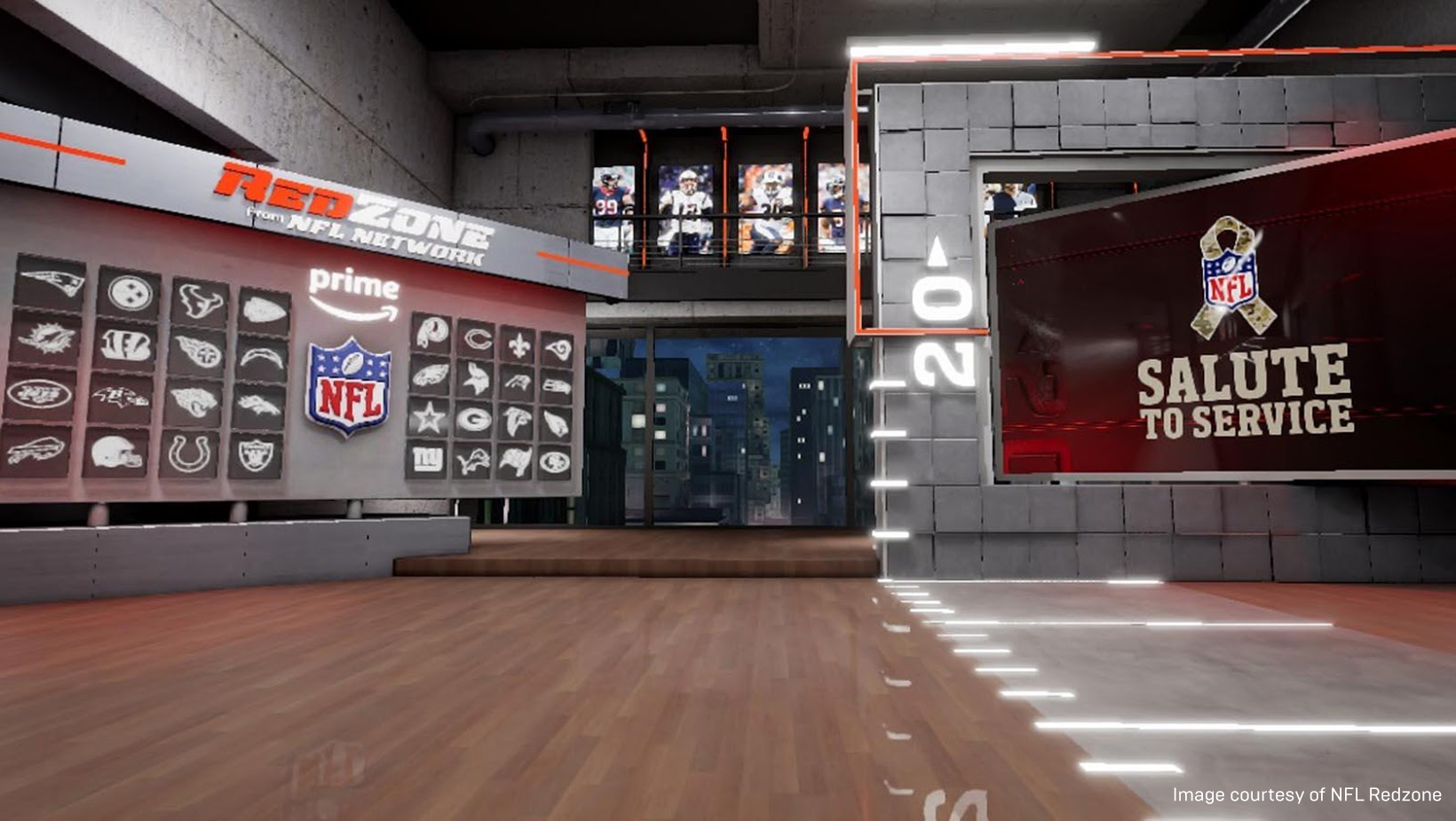 Lee adds that the show currently has three looks, one each for daytime, dusk, and nighttime. “The show starts in the daytime but goes until the last afternoon game is finished,” he says. “If we’re still on air at sundown, we switch to the nighttime set. Ultimately, we’d like to make one level that will change the time of day dynamically to reflect the true time of day.”

The Future of NFL RedZone

The NFL RedZone production team has just scratched the surface with all the capabilities of Unreal Engine. Future plans include preparing interstitials, specialty graphics, or even show opens that can be updated instantly by an operator in the control room. “Instead of having to render it all out ahead of time, we could put these together on the fly with information pertinent to up-to-the-minute news,” says Lee.

The team is also looking at building mixed reality experiences for big events like Super Bowl Opening Night, with names and statistics hovering over players while the camera pans the crowd and captures their reactions.

“What I really like about UE is that it extends the illusion of virtual graphics, whether with a set or augmented reality,” says Lee. “For the viewer, that experience is going to be that much greater if the lines between reality and virtual graphics are more difficult to discern. The graphics can show content in context and seamlessly become an extension of the practical set.

“I’m really looking forward to what the future holds for this technology. TV graphics in general could use a facelift to take it to the next level, and Unreal Engine can provide that.”

To create your own great real-time virtual sets and environments, download the free Unreal Studio beta today and get Unreal Engine, import tools, and a whole lot more!