The leading housing developer in Spain, Madrid-based AEDAS Homes owns over 1.8 million square meters of land—enough to build 15,000 homes—in the nation’s key markets, including the beautiful coastlines of Málaga, Mallorca, and Alicante.

The company’s leadership is eager to stay at the forefront of emerging technology and promote a culture of innovation, believing it to be one of their key values. As part of this effort, they appointed José Luis Leirós as Director of Innovation just over a year ago. Leirós has a background in technology, and an entrepreneurial flair.

The birth of “Live by AEDAS Homes”

Leirós quickly recognized that the company faced a challenge: buying a new home is all about trust, and typically requires a face-to-face conversation between the real-estate advisor and client at the showroom. But, because their properties are situated in locations popular with those seeking to relocate or purchase a second home, many of AEDAS Homes’ prospective clients live far away from Spain, in countries such as the UK, Germany, Switzerland, Norway, and the Netherlands. 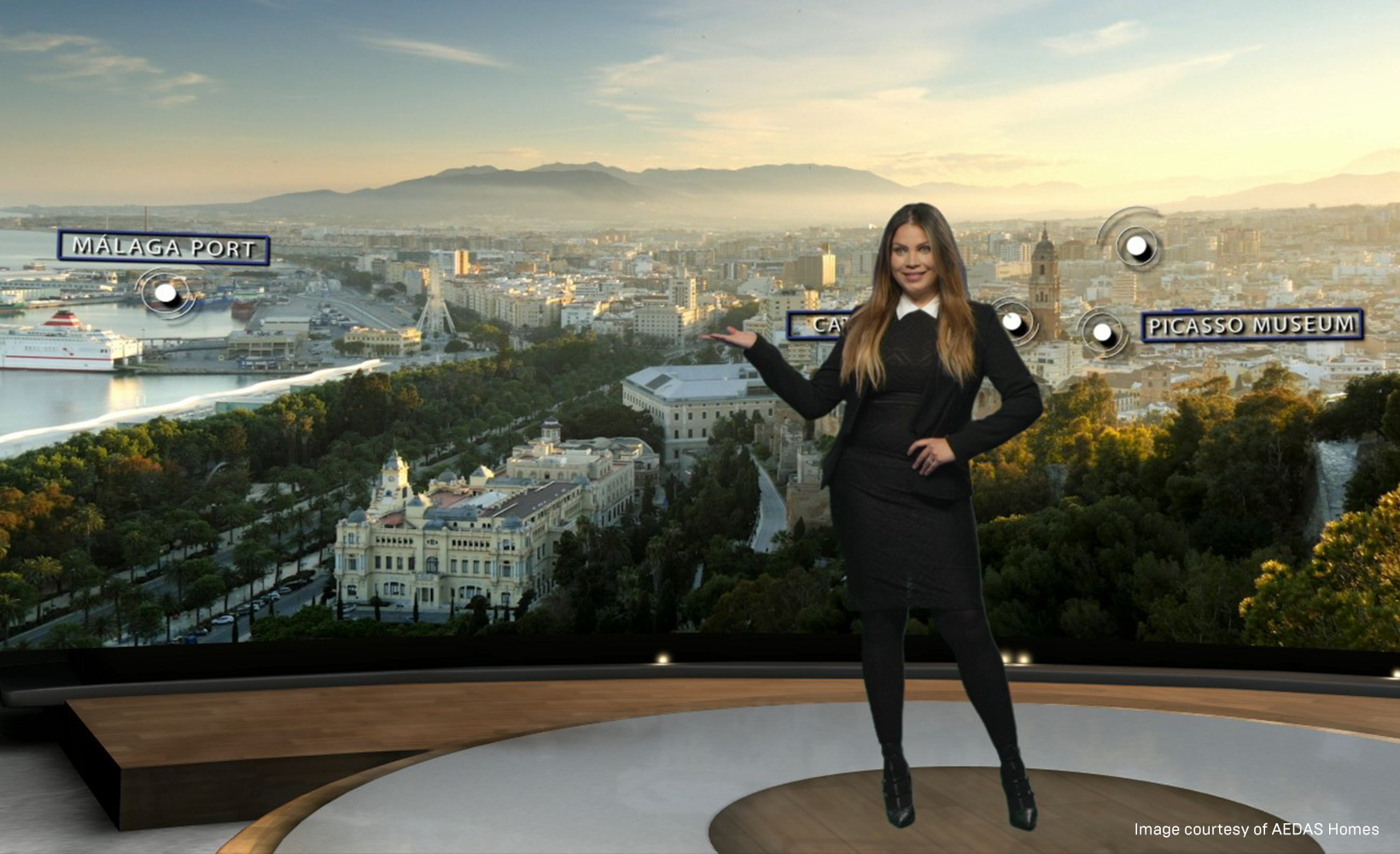 “We needed a solution that could bring both our homes and our real-estate advisors to our clients, no matter where they were,” says Leirós.

Leirós’ first idea, to install multiple cameras in a showroom and stream live from there, was quickly rejected due to the high cost, the limited camera angles, the dependency on illumination conditions, and the lack of opportunity to show common areas.

“Then I came up with an innovative approach: combining a 3D model of the development with an advisor in a green chroma,” says Leirós. “I imagined a live video call where the real-estate advisor would chat with you while walking around the virtual home and the amenities. This had never been tried in our industry.”

Leirós pitched the idea to Javier Sánchez, Chief Innovation and Marketing Officer at AEDAS Homes, who, with his experience working in TV and broadcasting, immediately saw its potential. Sánchez got approval from CEO David Martínez, whom he credits with having the courage and vision to get behind what was still only an idea, and the Live by AEDAS Homes project was born.

Vanian Gardens, situated on the Costa Del Sol in Málaga, was selected as the pilot development. AEDAS Homes chose local architectural visualization studio Areadesign to create the 3D model and prepare it for real-time use. Founded in 2013, Areadesign has recently been making avenues into real-time visualization, and has an Unreal Engine department. Head of department José Antonio Marín was responsible for bringing the model into Unreal Engine, using Unreal Studio’s suite of tools for data import and preparation.

Marín began using Unreal Engine in 2014, and is self-taught. When Unreal Studio was launched as a free beta offering in March 2018, he quickly got to grips with it. Ultimately, his experience with the toolset won him his current role at Areadesign.

For the Vanian Gardens project, Marín needed to export the model from 3ds Max, optimize the geometry, create the LODs, and adjust lightmaps, vegetation, and materials for real-time use. Because of the eventual integration with the green-screen live-action footage, he had to keep the frame rate at over 30 fps. One of the ways he achieved this was by using Unreal Studio’s built-in polygon reduction tools. 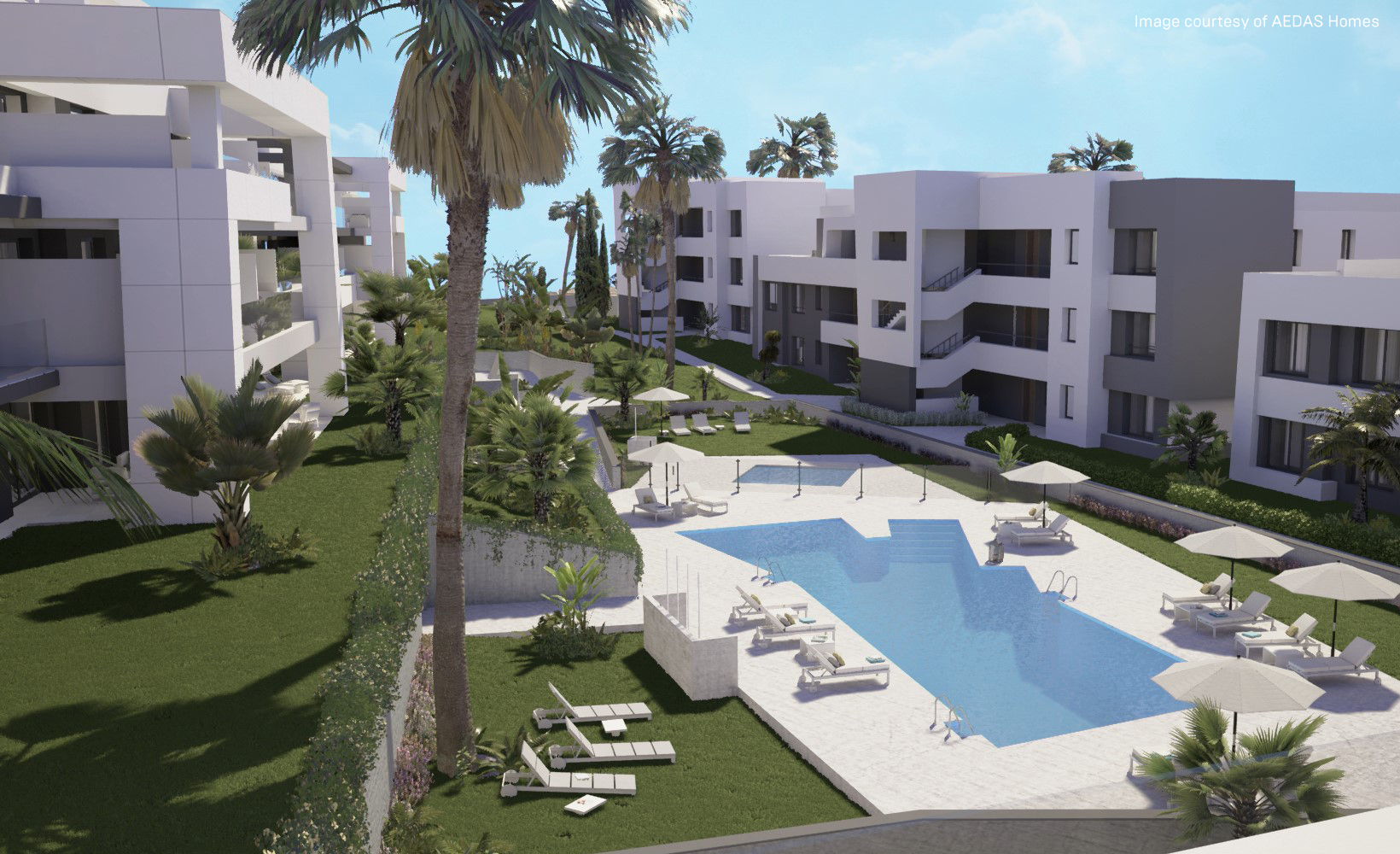 It’s just one of the features he appreciates. Datasmith, Unreal Studio’s workflow toolkit for importing and nondestructively re-importing data from 3ds Max and a wide range of other CAD and AEC-related formats into Unreal Engine, has also proved a boon.

“Before Datasmith, I was working in a traditional way, which was very slow for large-sized projects,” he says. “But then Unreal Studio changed the game. I did some testing exporting from 3ds Max to Unreal Studio and it always worked just fine, even exporting a lot of objects at the same time.”

Marín also found the automatic conversion of materials and normal maps very helpful, stating that he only needed to manually adjust two or three materials for the project. It’s an area the Unreal Studio team are continuing to refine since the initial release of Unreal Studio that Marín was using, with better V-Ray matching and support for most commonly used 3ds Max maps added in version 4.21, and further enhancements to come in the next release.

Next, the project passed to Brainstorm to build the final streaming application. Also based in Spain, Brainstorm is a specialist company that provides real-time 3D graphics and virtual set solutions for broadcast graphics, feature film production, and corporate presentations. The company has a rich pedigree, with nearly 25 years of experience and more than 2,500 installations worldwide, including many of the world’s leading broadcasters. 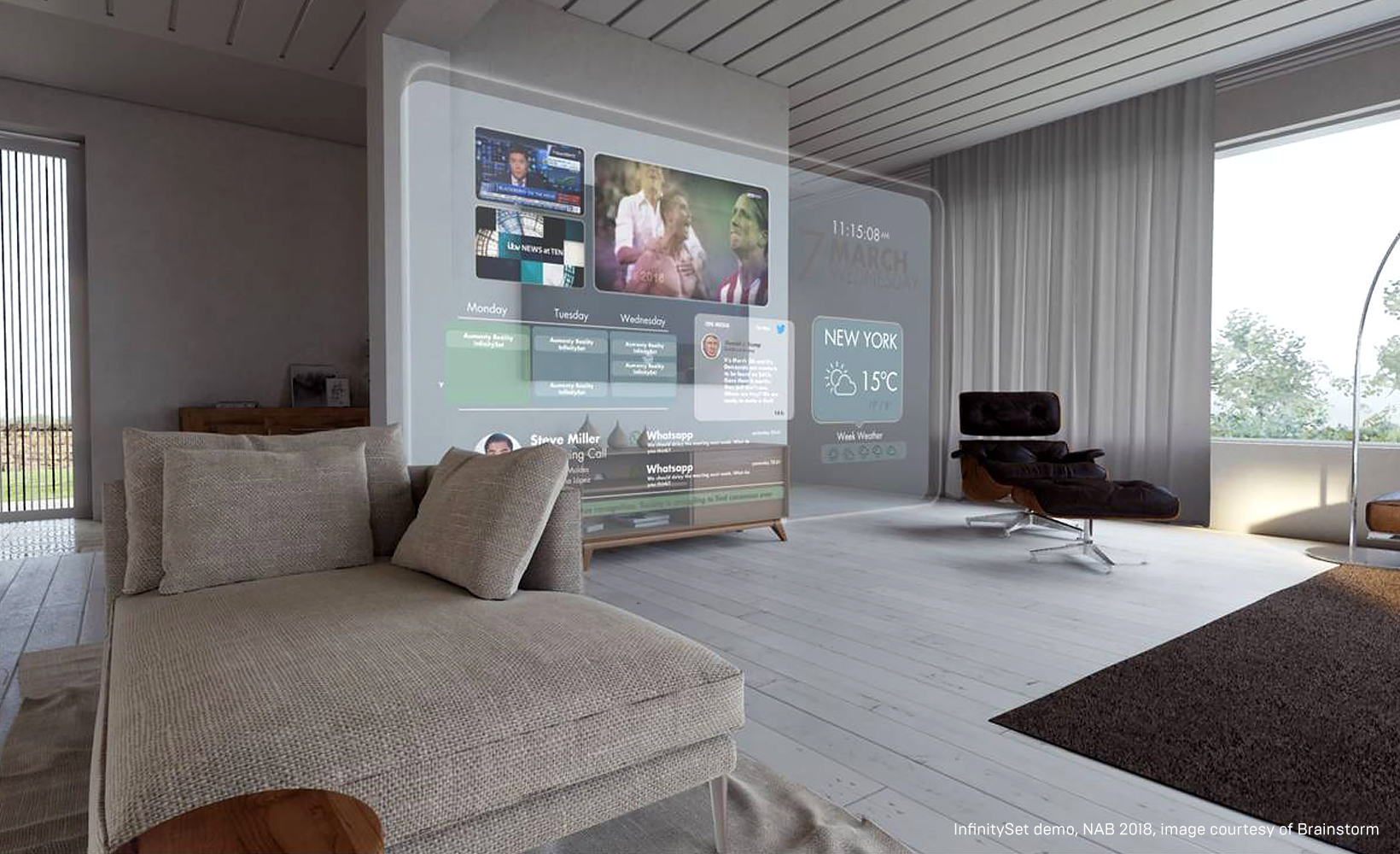 For the Live project, Brainstorm used InfinitySet, their virtual set and augmented reality solution. It features a number of innovative technologies including TrackFree, a patented camera-tracking independent technology that can be used in combination with integrated internal chroma-key software or external chroma-key hardware.

“InfinitySet is the hub that makes all pieces come together,” says Miguel Churruca, Marketing and Communications Director at Brainstorm. He explains how InfinitySet takes the chroma-keyed camera feed of the talent, adds it to the 3D background, and applies all of the camera views and movements that are created in the system in real time. The result is a final composed production, which can be streamed to the end user. 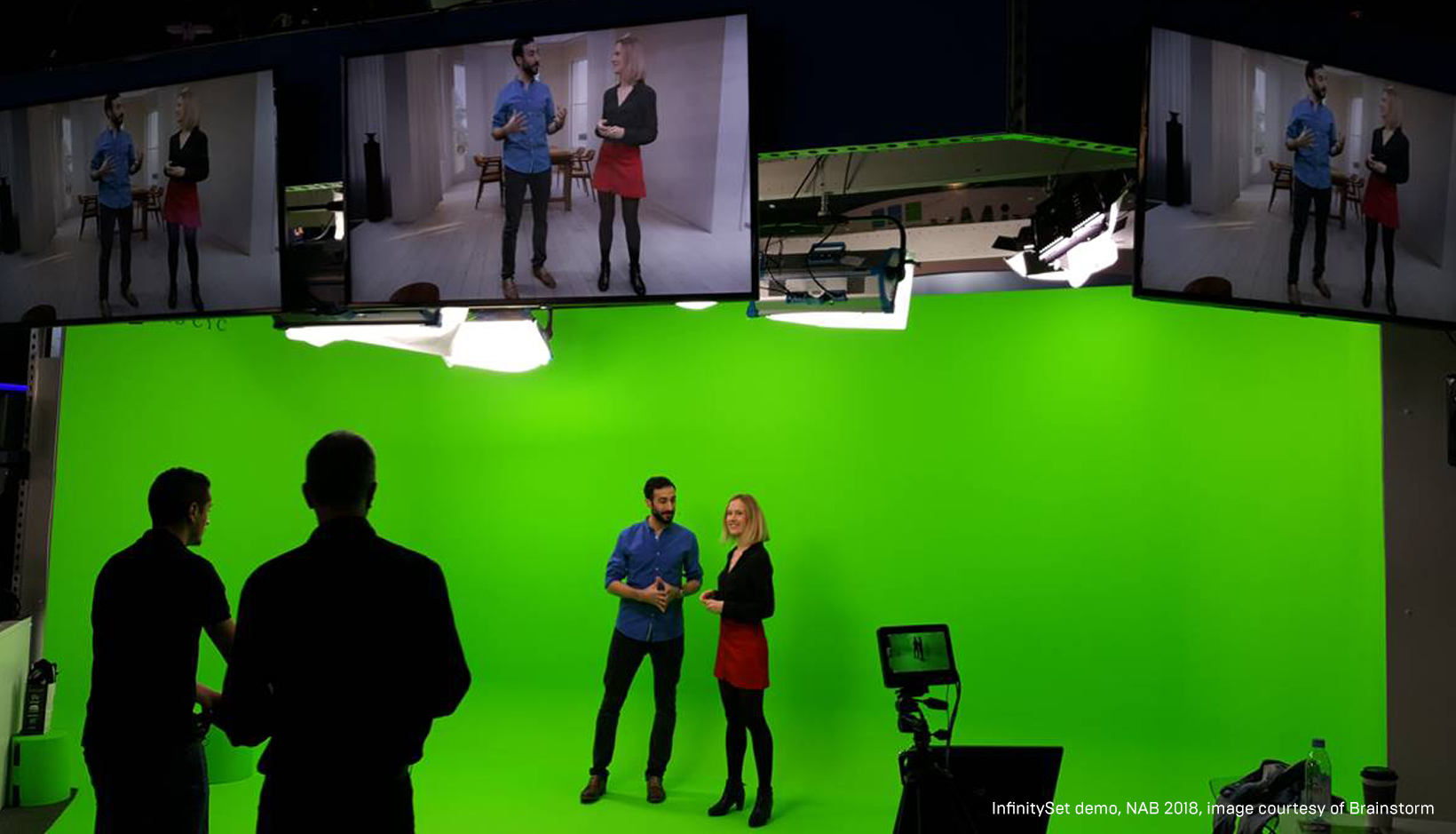 InfinitySet runs on eStudio, the company’s render engine, but also supports third-party render engines, such as Unreal Engine, that can work in combination with eStudio. It was this aspect of the technology that was leveraged for Live. “Once the model is optimized in Unreal Engine, it also works seamlessly within InfinitySet when using the Combined Render Engine,” explains Churruca.

A face-to-face conversation, from a different country

The result was a unique application that enables clients to talk live with a professional real-estate advisor and ask any questions they may have about floorplans, pricing, and options. At the same time, the advisor can show them around the development, making sure that clients understand the location, the project, and the units. 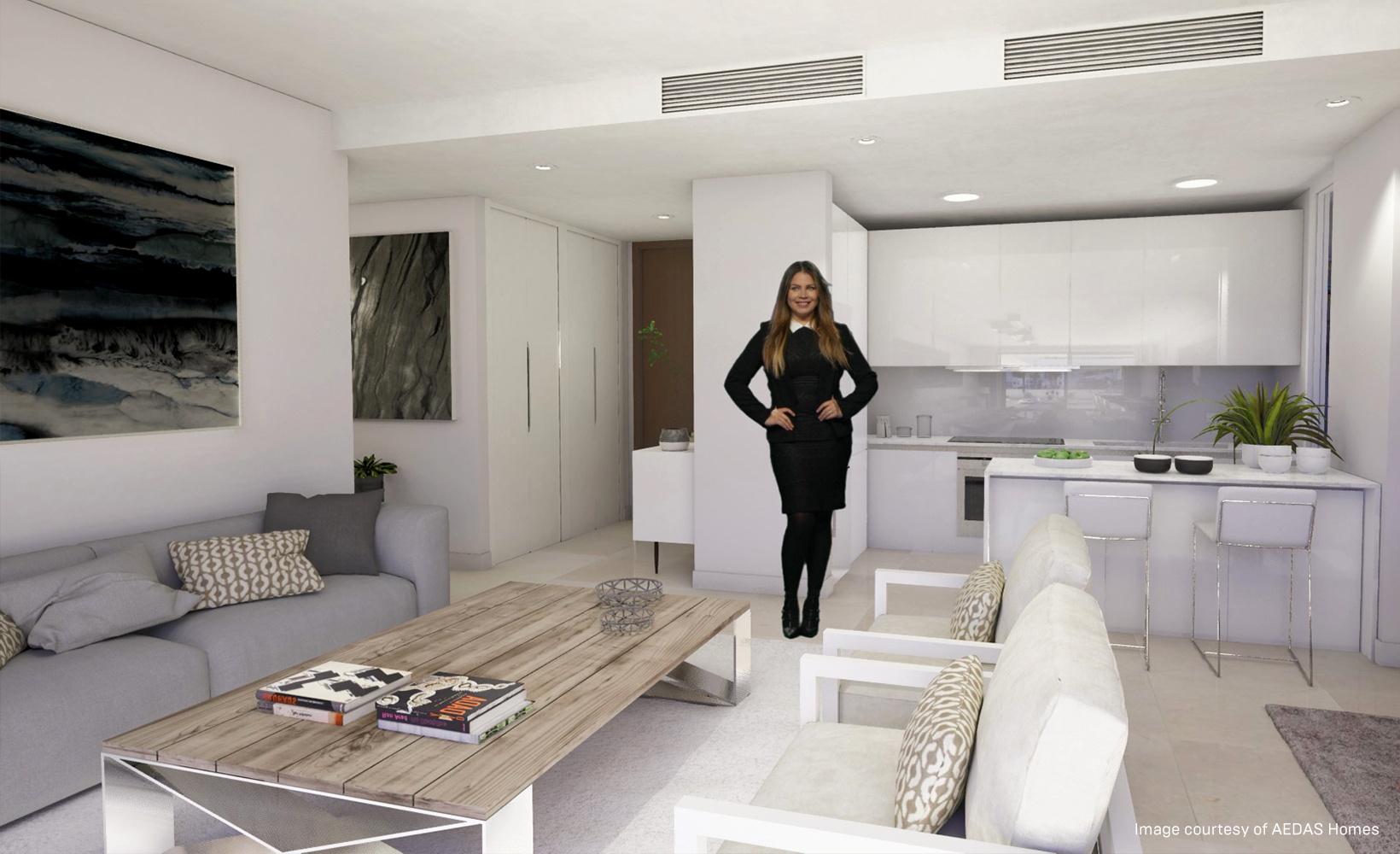 “The advisor is realistically integrated in the 3D model, which has never been seen before in the property development sector,” says Leirós. “And you do not need to install any software, use VR glasses, or learn how to move in a 3D environment. You just open a link on your mobile, iPad, or computer, and you’re all set.”

The experience is much more profound than browsing a website or watching a 360 virtual tour, and the reaction from clients has been overwhelmingly positive. “Every single client ends the tour with a big smile,” says Leirós. “They consistently tell us that they have a much better idea of spaces and room distributions, and that they feel more motivated to come to visit us at the real showroom.

“We are hoping to create an emotional connection between prospecting clients and our products. Chatting with the advisor is what matters, the technology is just a new way of carrying the message.” 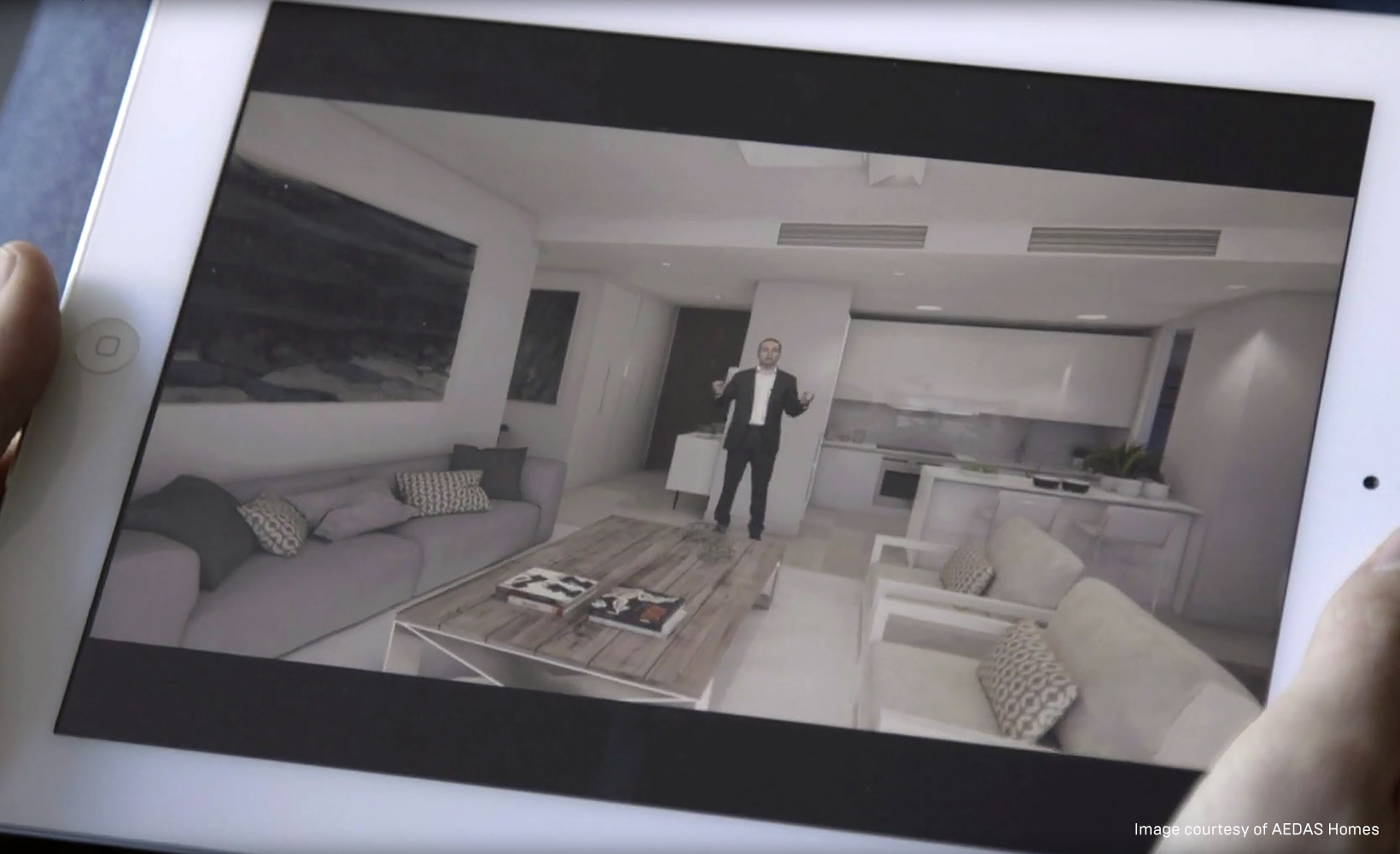 The keys to success

So what factors account for the project’s undeniable success? “We looked for the best partners to make Live possible,” says Leirós. “José Antonio Marín at Areadesign did an amazing job bringing the 3ds Max model to Unreal Studio.

“Mónica Victor, Miguel Oñoro, and the rest of the crew at Brainstorm were challenged by the requirements of a totally new kind of client,” he continues. “They came up with creative solutions and delivered a realistic advisor integration in the 3D model.”

And as for Epic Games? “Unreal Engine is the backbone of Live. Bringing our homes to clients that are miles away would not be possible without the real-time rendering capabilities of this software,” says Leirós. 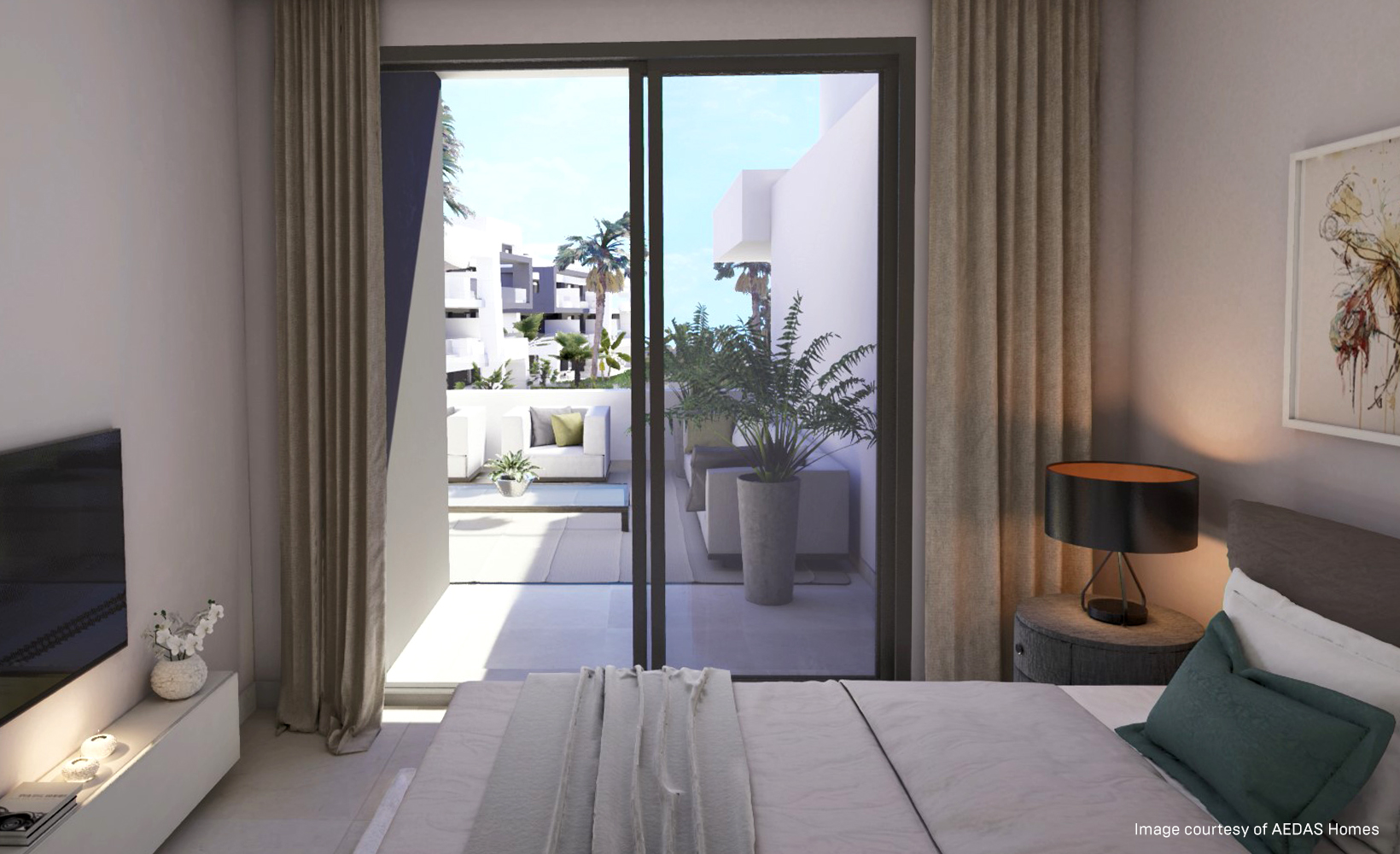 “It’s incredible that such a powerful tool is available for anyone to experiment with,” he goes on. “Unreal Engine was designed for video games, but is finding more and more unexpected use cases in other industries. We are grateful to Epic Games for allowing the home-development industry to benefit from so many years of research and development.”

The future is closer than you think

AEDAS Homes prides itself on its innovation, and is not about to rest on its laurels. Leirós paints a picture of what may be around the next corner. “Imagine if in the near future, we can show you any unit in our portfolio,” he suggests. “The quality of the models and the accuracy of the integration are so high that your eyes are tricked. Advances in VR glasses make it feel as if you are inside one our homes chatting with the advisor. Different options and furniture configurations are loaded with voice commands…It may sound futuristic, but at AEDAS Homes we are already working on it. We have not dried out of ideas, so stay tuned!”

Want to become an innovator in your industry? Download the free Unreal Studio beta and get started with Datasmith and Unreal Engine today!