Survios has been one of the most successful pioneers in the VR space. The Los Angeles-based developer has an impressive resume of critically-acclaimed VR games such as Raw Data and Sprint Vector. With its most recent release, Creed: Rise to Glory, garnering a ton of praise, the studio has not only created one of the best VR boxing games, but one of the best boxing games period. We recently had the chance to interview several members from the team, and in this post, Survios explains how they were able to solve many hard VR problems while producing a knockout title.

Even though VR can offer unparalleled levels of immersion, clipping through opponents when you’re punching through them can be an immersion breaker. It’s a difficult problem to solve; after all, your opponents aren’t really in front of you to provide friction and resistance. This is why many other VR games avoid melee mechanics and instead rely on gunplay and archery for combat.

To overcome this issue, Survios needed to revolutionize melee for VR. Setting the stage, Lead Survios Engineer Eugene Elkin stated, “In our initial prototype, we set out two goals for ourselves: punching had to feel great and getting punched had to be impactful. We decided right away that the game would not be a straight boxing simulator, but a cinematic-inspired boxing experience. Despite a relatively compressed prototyping timeline, we were still able to create multiple gameplay iterations. The result of that investigation stage was the set of technological rules and techniques we dubbed ‘Phantom Melee Technology’.”

Explaining how the system overcomes melee clipping issues, Elkin elaborated, “At all times, there are essentially two separate player avatars that are contextually synced/desynced. One avatar is the representation of the player’s character and is bound by in-game physics like collision, hit reactions, and knockdowns. The second avatar—codenamed ‘Phantom’—always represents the player’s true position.” This separation is quite ingenious as it allows players to punch through opponents without ever feeling like you’re awkwardly clipping through them. 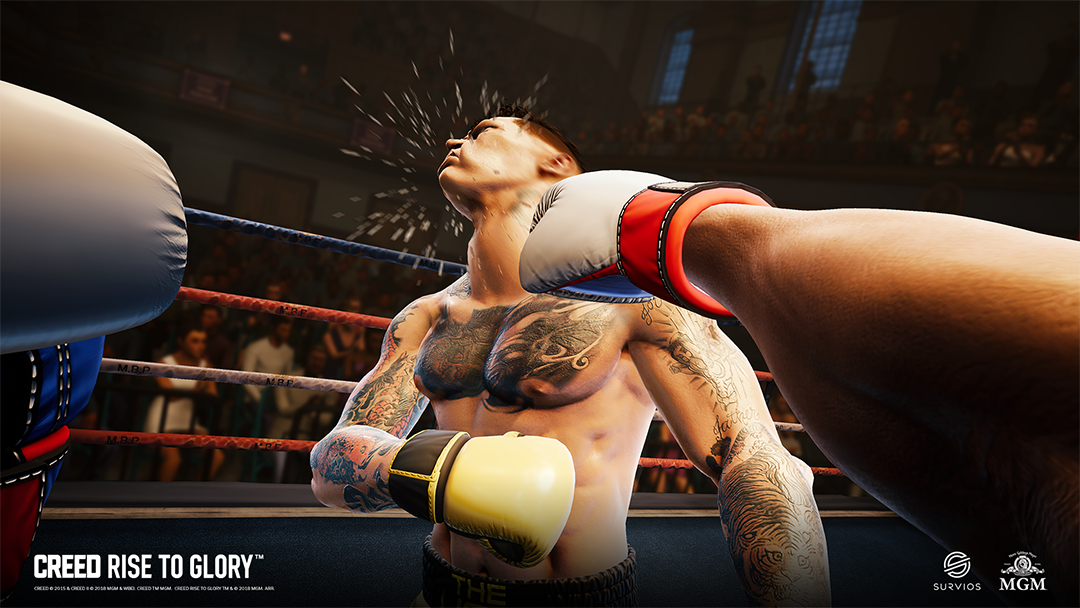 Lead Designer Valerie Allen was inspired to develop this system after reading a sci-fi manga. As Allen explains, “There was a scene in one of the Battle Angel Alita volumes that involved her brain getting overclocked. In that scene, she zipped forward to deliver a punch, only to find herself crashing to the floor because her mental projection of what she was doing was so far ahead of what her body could handle. This is largely how Phantom Melee Technology works.”

Despite having separate avatars, combat never feels disjointed. Allen explains, “After playing around enough, players quickly start to acclimate, and rather than wasting their real-world effort punching through things, they start to treat the avatar’s arms more like their own, and thus react to the position of their virtual opponent like a real-life one.”

While Phantom Melee Tech solves one major VR issue, Survios still needed to deal with players that might try and “break” the game by constantly flailing their arms about, which is neither fun nor realistic to the sport, but may be effective. To solve this problem, Survios incorporates limited stamina. Allen elaborates on this design philosophy, “Throwing a lot of of rapid punches leads to the avatar getting tired, so the player must focus on defending until the avatar’s stamina recovers.” The lead designer added, “The more we tested and tweaked stamina tuning, the more our gameplay started to look and feel like an actual boxing match.” Those with outstanding real-life endurance may balk at the inclusion of a virtual stamina system, but Allen explains, “While the avatar may tire out more quickly than the player does, the player isn’t the one experiencing the debilitating effects of being punched in the face and gut.”

This inclusion of limited endurance also made online PvP more enjoyable. Elkin notes, “The stamina system became a very important tool to encourage players to block and defend, strategically deploy their punches wisely, and treat it like an actual boxing match.” Even though Rise to Glory is not the first VR boxing game, it is the first VR boxing game to feature online play. Early on in development, Creed wasn’t going to feature multiplayer, but Survios knew the package wouldn’t feel complete without it. Adding online PvP to a melee-focused VR game while making it feel immersive and fun is extremely difficult. Elkin elaborates, “Unlike traditional fighting games where moves and abilities are predetermined, it’s extremely hard to predict how real-life players will behave in a PvP setting.” This issue is heightened when you consider that Rise to Glory features full-body avatars. On the networking front, Multiplayer Engineer Eva Hopps added, “The biggest challenge we immediately knew we had to deal with was network lag. Since we couldn’t rely on the usual fighting game tricks to mask or compensate for it, we tweaked Phantom Melee’s fatigue-triggered slowing effect as our way of concealing lag from players.” Even though incorporating online play while creating a new revolutionary VR combat system was no small task, Hopps mentioned that, “for the most part, Unreal made this pretty easy for us.”

To ensure that the boxing felt realistic, Survios enlisted the help of professional boxers early on in development. Not only did the team heed their advice, but they signed up for boxing lessons. “To this day, we have boxing coaches come twice a week to our office for lessons, and that experience was invaluable for our designers and engineers in crafting a realistic boxing experience,” Elkin explained, elaborating, “Our marketing team also worked with Buzzfeed to have an Olympic-level boxer, Mikaela Mayer, play the Career mode on the hardest difficulty setting, and she was blown away at how similar the mechanics were to the real sport.”

To take the game’s realism to the next level and to reward players who really get into the action, Rise to Glory leverages VR’s accelerometers and motion sensors to track how hard players hit. Allen adds, “We check both the distance and speed of the player’s hand movements, and in some cases the angles as well. We tuned the values to require a reasonable amount of force to throw a punch, but not so much that players feel like they always have to punch as hard and fast as they possibly can for maximum impact.” As a result, Creed ends up being a good workout that takes “shadow boxing” to the next level. Even recovering from a knock down requires players to exert physical energy to get back into the fight. While many past boxing games would often force players to quickly tap a button to recover, Rise to Glory does something wholly unique that gives players more agency than ever before. Allen explains, “I really liked the concept of the player getting hit so hard that they experience a sort of barely-conscious tunnel vision, and that it would require physical effort to run back to their body.” Taking a page from the studios’ past VR racing game Sprint Vector, once players are knocked down for the count, they get shot out into a dark tunnel and must swing their arms to run back to their bodies. Considering you can hear the ref audibly count to 10 in the background, it provides a tremendous sense of urgency and heightens the experience in a fun way that only VR can deliver.

While most VR games opt to render just virtual hands, as it can be really hard to figure out where your elbows, torso, and feet are with only three points of contact, to overcome this issue and render players’ full bodies, Survios wrote a lot of code to create believable inverse kinematics (IK). As Elkin notes, “The body IK system has gone through several iterations here at Survios. The current system is in active development and is shared among most of our projects, but is currently a custom animation solver that determines optimal joint location from three tracked inputs.” The lead engineer added, “Luckily, Unreal makes it pretty simple to create new IK Solvers, which is extremely powerful for us.”

Considering the core Rise to Glory development team consisted roughly of nine developers, Survios has impressively been able to solve many difficult challenges with relatively little resources. Elkin attributes much of the success to the passion of his associates, “I’ve never worked on a more self-motivated team: everybody loved the project from the initial prototype and only wished we could have more time to continue working on it. While it may sound cliché, we truly were making a game that we wanted to play.”

With this being Survios’ third Unreal Engine 4-powered VR game, Elkin also attributes much of the studio’s success to improving upon an already strong UE4 foundation, “It’s extremely important for us to reuse technology between projects. Throughout the years and over the course of several projects, we have continued building out our custom toolset in UE4, and that has significantly sped up our dev cycles on new projects. Having access and the ability to change engine source code is also invaluable.” Hopps added, “UE4 also makes it easy to move from project to product with a consistent set of tools, so nothing on our end feels like it’s changing drastically as the project evolves from prototype to retail-ready.”

In terms of specific tools, Elkin had high praise for UE4’s debug stump allocator, “Unreal has great tools for tracking nasty memory stumps and analyzing performance.” As a multiplayer engineer, Hopps praised UE4’s Profiler and noted how “amazingly easy it is to network things in Unreal.”

While Rise to Glory marks Survios’ fourth VR title, Elkin asserts that we’re just at the frontier of VR gaming. “I think that we’re experiencing a time similar to the pioneering days of the ’80s when game developers were exploring, experimenting, and trying basically everything for the first time,” adding, “Right now, developers just don’t know for sure what will work or not in VR; all of the traditional knowledge of game development that has been acquired over decades is just not valid most of the time in VR development. VR is a unique beast and we’re just beginning to scratch its surface–but every day we discover something new, and it’s definitely a very exciting time to be developing in VR.” 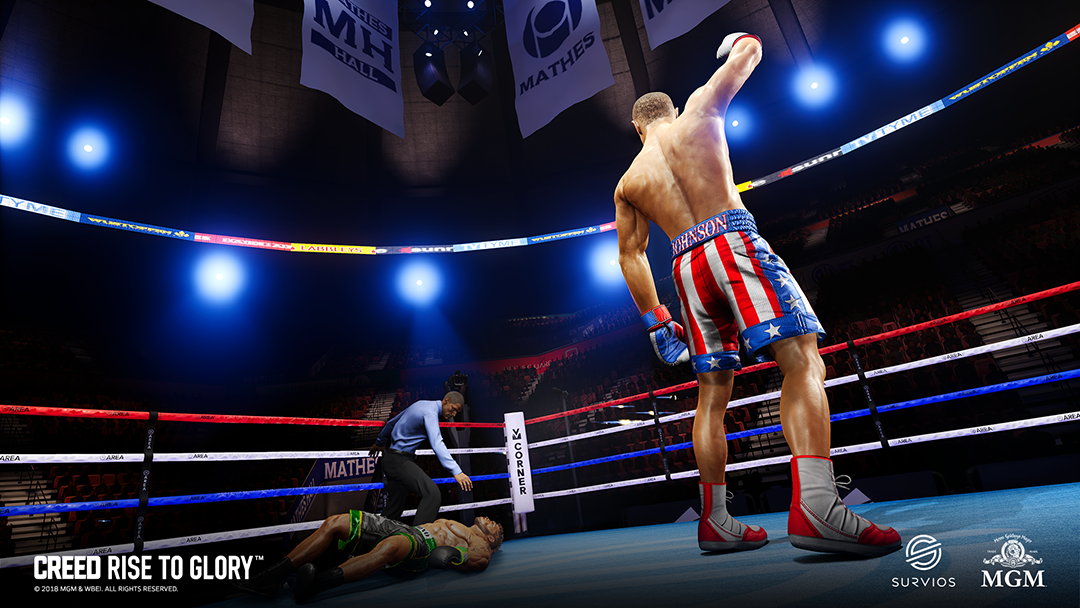 If you’re interested in creating your own VR game, you can download Unreal Engine for free today.