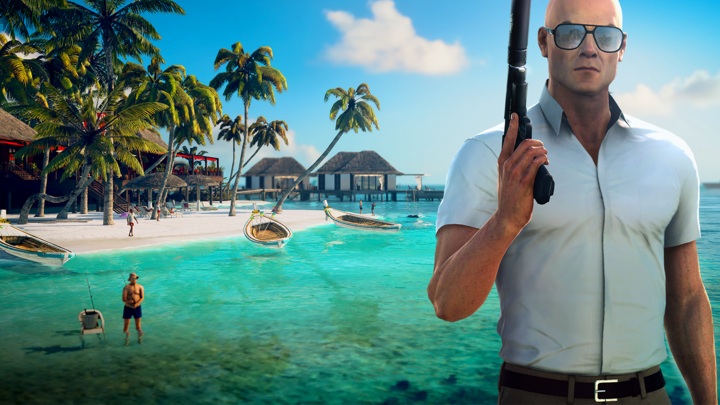 It’s time that Agent 47 had a break from the assassin life. But unfortunately, his superiors have other arrangements.  In this month’s Hitman 2 roadmap, Agent 47 is jetting off to Haven Island, a tropical sun-soaked resort in The Maldives. But there’s no time for pina coladas, there are plenty of new missions that run from the beginning to the end of September that include new targets, unlocks, and missions.

Kicking off September were two escalation contracts that have already been released. The Dalton Dissection contract will have Agent 47 return the New York bank to take out some new targets wearing his cutest disguise to date, the bank robber disguise with bonus bunny mask. The second contract, The Covert Dispersal, challenges Agent 47 to crash a quaint garden party by eliminating the undercover officers.

Next on the roadmap is the Dubious Cohabitation contract available on September 12 and has our undercover agent seek out an old assassin friend. If the mission goes to plan and your long-range skills are on point then Agent 47 will be walking away in a lavish cashmerian suit.

On September 13, the first Legacy Elusive Target of this month is The Blackmailer. The target will be walking the catwalks of Paris and Agent 47 will need to take him out and retrieve a secret memory stick.

Another escalation contract will be added on September 19 called the Merele Revelation which has Agent 47 infiltrate a cult disguised as a Shaman. Upon completing this contract you’ll unlock the Emetic Grenade that makes enemies vomit.

September 24 is when Haven Island will be available for expansion pass owners. Alongside the sunny resort are two expansion pass exclusive Special Assignments, the Bitter Pill and A Silver Tongue, the perfect holiday package.

Then finally, another Legacy Elusive target is added on September 27 named The Angel of Death. Agent 47 returns to Marrakesh to take out an old retired nurse. You’ll be up against the clock with 10 days to take her down.

IO Interactive will also be adding featured contracts, game updates and a live stream as the month progresses. With two contracts out already and the next one releasing September 12 it seems like the Summer holidays are over for Agent 47, maybe the Christmas holidays will be more relaxing.