Grab a bargain in the Steam Halloween Sale

Home » Grab a bargain in the Steam Halloween Sale

Grab a bargain in the Steam Halloween Sale

It’s all treats and no tricks if you’re looking for CRYENGINE-powered gaming goodness in the Steam Halloween Sale.

Give yourself the gift of top-tier CRYENGINE-powered gaming without freaking out your bank balance by checking out some of our highlights from the Halloween Steam Sale. But don’t delay as these offers end on November 1st.

Savage, nightmarish monsters roam the Louisiana swamps, and you are part of a group of rugged bounty hunters bound to rid the world of their ghastly presence. Banish these creatures from our world, and you will be paid generously—and given the chance to buy more gruesome and powerful weapons. Fail, and death will strip you of both character and gear. Your experience, however, remains in your pool of hunters—called your Bloodline—always.

About the Legends of the Bayou DLC:

The Legends of the Bayou DLC dives deep into the bayou’s dark heart to initiate the full release of Hunt: Showdown and provide those loyal to the cause with two new Legendary Hunter characters, two unique weapons, and 500 Blood Bonds.

For Halloween, the Butcher appears to have taken on the aspect of the festivities around it. You’re going to want to see this…

Enjoy 50% off CRYENGINE-powered Prey, developed by Arkane Studios and published by Bethesda. You can also get 50% off the Prey Digital Deluxe bundle, including Prey: Typhon Hunter and Prey Mooncrash.

In Prey, you awaken aboard Talos I, a space station orbiting the moon in the year 2032. You are the key subject of an experiment meant to alter humanity forever. But things have gone terribly wrong. The space station has been overrun by hostile aliens, and you are now being hunted. As you dig into the dark secrets of Talos I and your own past, you must survive using your wits, weapons, and mind-bending abilities. The fate of the Talos I and everyone aboard is in your hands.

Prey: Typhon Hunter is an online multiplayer update. Typhon Hunter is a lethal game of hide-and-seek between a single survivor and five other players who stalk, hunt, and hide in plain sight as shape-shifting Mimic aliens. Every object is a potential enemy. Will Morgan or the Mimics prevail?

In Prey: Mooncrash, TranStar’s secret moon base stopped transmitting shortly after the events of Prey. Now Peter, a hacker stationed aboard a spy satellite tasked with intercepting TranStar communications, must find out why. Trapped and under a ruthless contract with KASMA Corp, Peter’s only hope of ever seeing his family again is uncovering the moon base’s lost secrets.

Score a whopping 90% off ShadowSide from ArdoVGames, an amazing example of what a one-man-team can achieve with CRYENGINE. Check out our interview with developer Andrey to find out more.

ShadowSide is a first-person adventure game. It follows the adventures of a police officer called Alex, which takes place in atmospheric and creepy locations. It would seem that his everyday life and work is just the same old routine. But one day a dramatic event occurs, which would be the worst nightmare of even the most experienced policeman. This day will radically change his life…

You can also pick up Andrey’s first game, Investigator, with a massive 75% off in the sale too!

Another spooky CRYENGINE indie game, The Cursed Forest, is available at a 35% discount.

About The Cursed Forest:

Following a car crash that leaves you stranded in a dark forest, you’ll be hunted and haunted by the creatures and secrets that lie within it. There is an innocent soul buried within a terrifying mystical beast that stalks you in the woods, but can you survive a multitude of dangers long enough to release it? The Cursed Forest allows you to choose your own path and explore the dark beauty of the forest, challenges you to navigate deadly traps set by evil spirits, and you’ll discover the fate of earlier adventurers and expeditions that came across this cursed place. Can you stop the darkness rising?

You can also celebrate Halloween with Steam Halloween Events in CRYENGINE-powered games.

Miscreated, a multiplayer online hardcore survival game set in a post-apocalyptic future, has added a bundle of new Halloween themed items in the game for you to find. They will spawn in the world via Halloween bags or may be found by other means… Check it out in their latest update to the game. 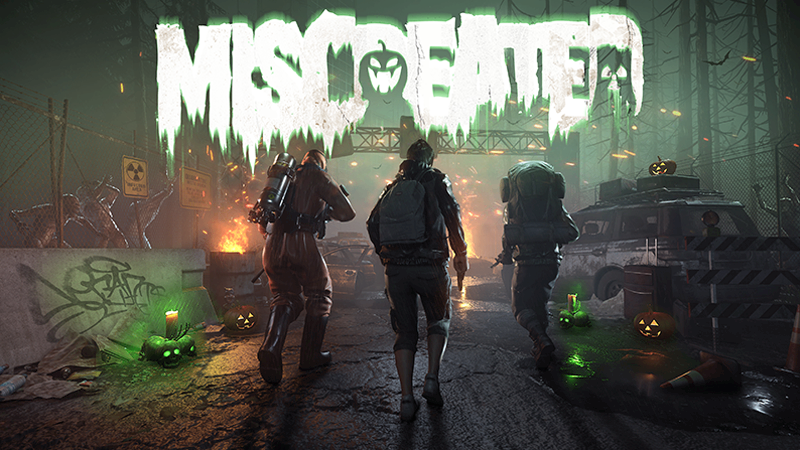 Deceit, the free-to-play online shooter that tests your instincts at trust and deception, is running a Halloween-themed in-game event featuring a variety of unique cosmetic seasonal rewards, performance bonuses, and some spooky map decorations.

And because we live to give at Crytek, you can also pick up a couple of our-not-so-spooky games at a discount too. Experience the story of Marius Titus, a young Roman soldier who witnesses the murder of his family, then travels to Britannia to seek revenge in Ryse: Son of Rome with 60% off. Our VR space adventure Robinson: The Journey is also available to buy now with a stunning 75% off.

As ever, we look forward to your feedback in the comments, on the forum, via Facebook and Twitter, and you can join the community and our CRYENGINE development team over on our official Discord channel. If you find a bug in the engine, please report it directly on GitHub, which helps us to process the issue quickly and efficiently.

Are you looking for your next career move? At Crytek, we value diversity and actively encourage people from all kinds of backgrounds and experience levels to apply to our open positions, so join us over at LinkedIn and check out our careers page.