After being told there was no longer a market for old-school Castlevania-type games, prominent Castlevania producer Koji Igarashi founded Artplay to prove that gamers still had an appetite for the genre. The independent studio launched a Kickstarter campaign to help fund their original IP Bloodstained: Ritual of the Night, which would continue to push the “Igavania” legacy that Igarashi famously helped create. Bloodstained released in June to critical success with many considering it one of the best crowd-funded titles made yet.

To see how the fledgling studio was able to create a new game that filled such large shoes, we interviewed Igarashi, who talks about what it’s been like developing a title in the genre as an indie studio with more finite resources. The producer also shares how Artplay designed Bloodstained’s wide assortment of weapons and enemies. To ensure the game would be fair, he explains how every boss designer had to beat their respective creations using nothing more than a short-ranged knife without taking any damage.

With Bloodstained being heavily praised for its pacing, Igarashi elaborates on how they designed the game’s large and detailed environments. He also reflects on how the studio listened to community feedback to revamp Bloodstained’s graphics, and explains how Unreal Engine was a driving factor behind the high visual quality of the game. Finally, he shares some of his favorite UE4 tools and features.

With deep roots tied to the Castlevania series, how does Bloodstained walk the line between giving fans what they want while also pushing the genre forward?

We wanted to create a foundation that would satisfy both new and old fans of 2D exploration-based action side scrollers. The theme for the entire project was to create exactly what fans would expect, which is a game system that exists and works, but within a fresh setting. If there is an opportunity to create the next game in [the series], a challenge would be to [implement] a new idea while maintaining the [feel of the] genre.

How has it been different developing an Igavania game as an indie studio this time around?

Igarashi: Working as an indie studio has been challenging, especially trying to find new people who would be willing to work on a [flexible] schedule. Larger studios not only have many talented developers, but also internal developers who are willing to take responsibility during an emergency. However, there really aren’t any differences when it comes to the mindset of creating something fun for players.

After some early feedback for its visuals, the studio completely revamped Bloodstained’s aesthetics with fantastic lighting, great animations, and robust visual effects. Can you talk about how you overhauled the game’s graphics?

Igarashi: The majority of the effort involved reworking the lighting. Since there was a lot of content to be made, the lighting was [initially] mostly automated. In order to create a 2D visual on a 3D plane, the FOV was set very low from the beginning, which caused issues from a visual perspective. The lights would not reach places where they should and gameplay was prioritized. Eventually, we strategically placed the lighting by hand after receiving feedback. Aside from the lighting, we received additional support for improving animations, NPC models, and environmental assets.

The combat has been heavily praised for being tight and responsive. How did you nail the game’s core feel?

Igarashi: Responsive combat was a feature we were very careful with. No matter how incredible the game design is, the control responsiveness is a filter that determines how enjoyable the game is to the player.

With a dizzying array of weapons and abilities, how did you go about designing them?

Igarashi: Weapons are categorized by weapon types and are designed to have the same DPS (damage per second), even when speed, range, freeze time, and attributes differ. The abilities we used this time are called Shards, which could be equipped based on the role of the Shard. If we wanted to create a quick one-shot attack, we would categorize [it] under the Conjure Shard, and if it’s a directional attack, we would make [it] a Directional Shard. Aside from the attacks, there are also Passive Shards that can give boosts to the players without consuming MP. We designed the weapons and abilities based on the number of attack and defense methods we could think of that would match different individuals’ playstyles.

With numerous unique foes that range from creepy to cute, how did you create the game’s enemies?

Igarashi: There were a couple of artists who worked on the enemy designs, so it’s their personality showing. The enemies are mostly based on the demons from Ars Goetia with some inspiration from the medieval era. 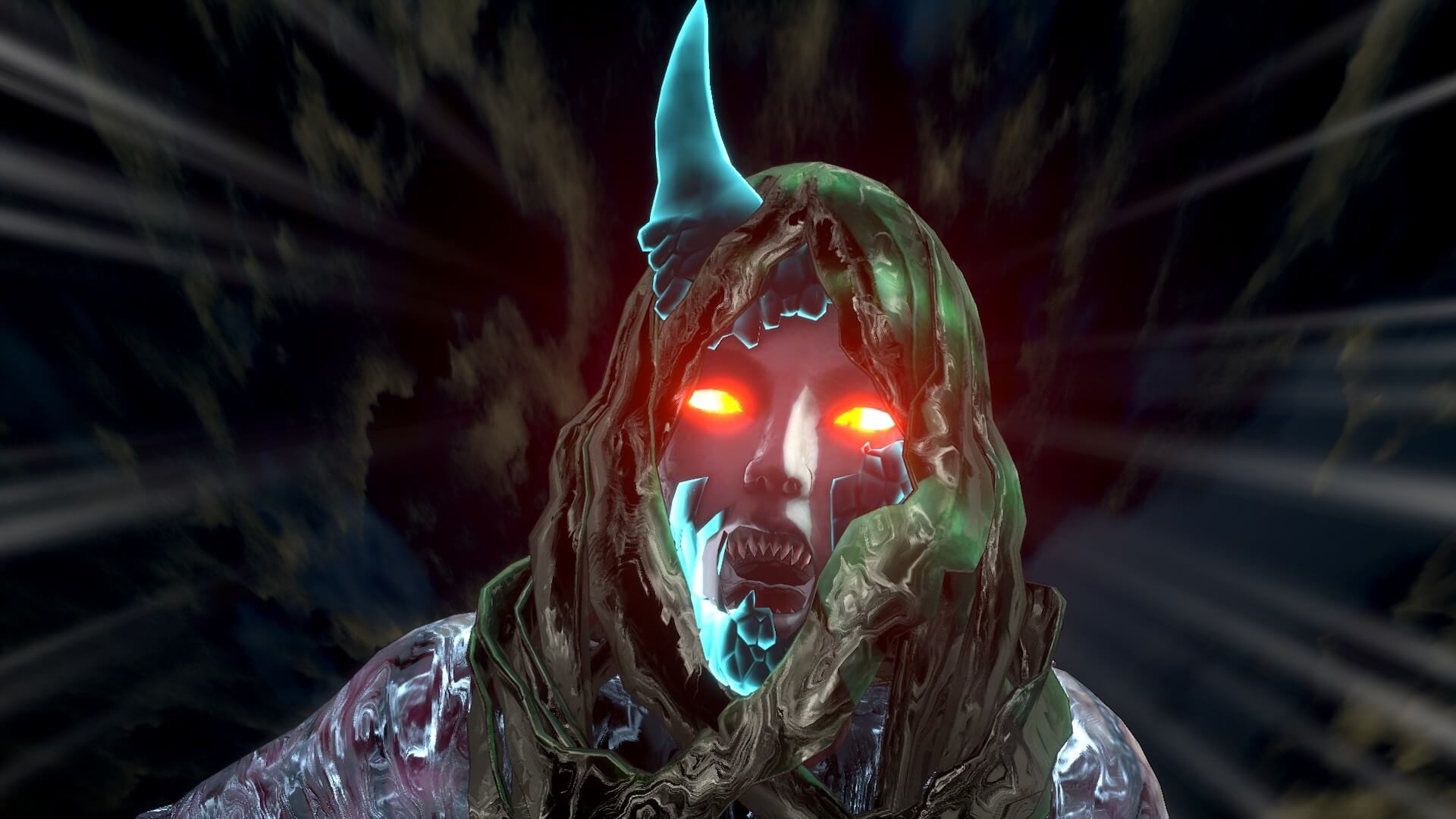 The combat feels challenging yet never unfair. How did you balance the game’s difficulty?

Igarashi: In earlier games we created, we gradually raised the difficulty bar every time a game was released. We wanted to return the balance back to the first and original game of this genre. I think the fairness of the combat comes from the rule we set for ourselves where the designer of the enemy/boss needs to beat it with no damage using only a knife. This ensures that no matter how short a weapon’s reach is, there is always enough time and a way to beat it without taking damage. Our team doesn’t forgive unfair enemy attacks.

The environments in Bloodstained feel large yet crafted with meticulous detail with levels that feature interconnected rooms. How did you set about creating the game’s haunting castle?

Igarashi: First, we come up with several ideas that were necessary for a gothic-themed game; this included what settings we wanted to use, the color palette, and environmental gimmicks. Then we created a full map based on the exterior design of the castle and assigned ideas to each area based on how the game should flow. After we spread out these ideas, we made sure the transitions made sense within the game’s overall plot and adjusted it according to how dramatic we could make it. 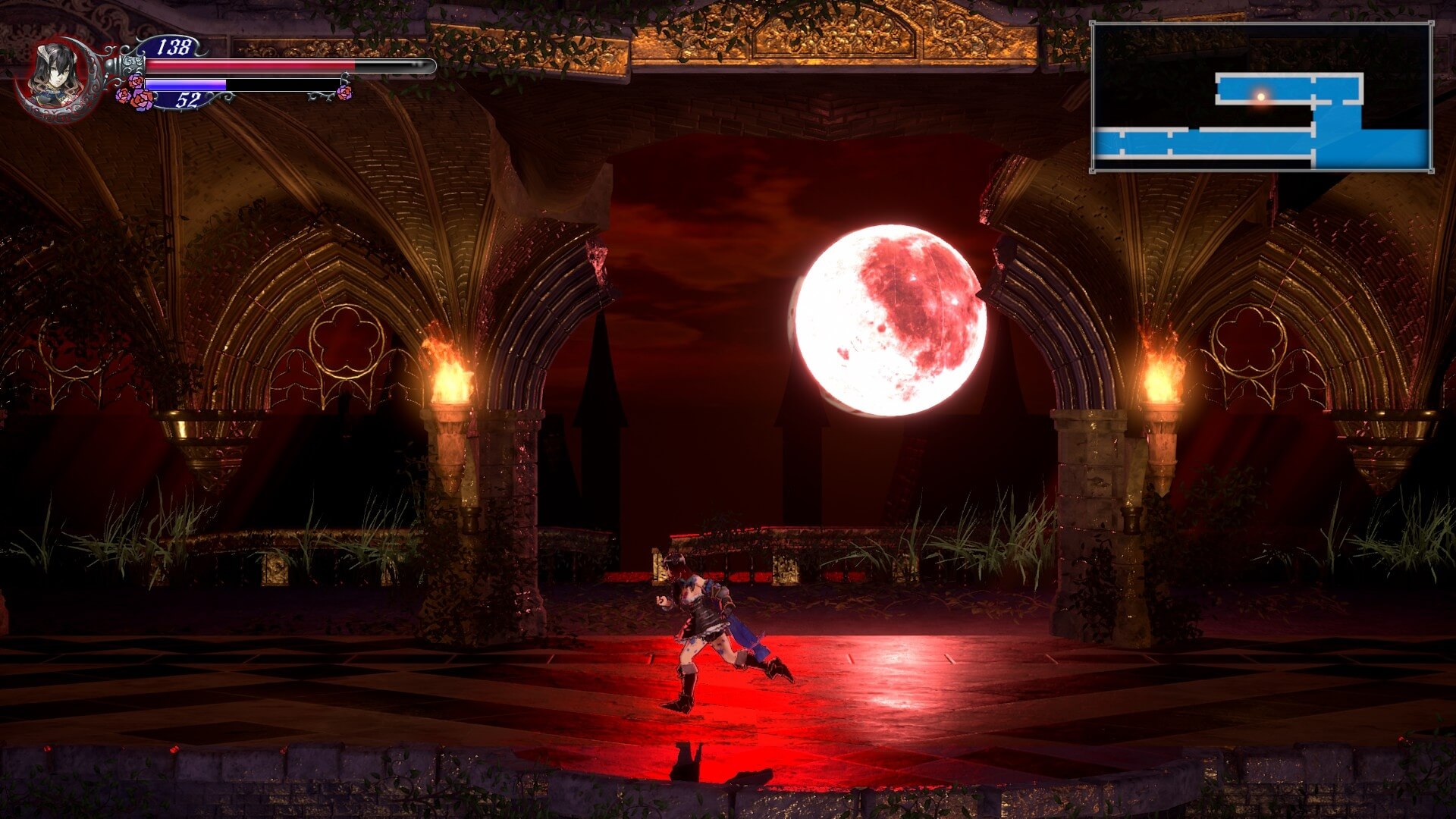 The game has been praised for being well-paced. How do you constantly keep players engaged?

Igarashi: I think we were able to keep a good “motivation flow” for this game. Our director is very skillful in this aspect and he was responsible for deciding the timing of when each weapon would be obtained and when new enemies appear. With this combination, this allows players to play until the end without getting bored.

Bloodstained features an awesome soundtrack from beloved Castlevania composer Michiru Yamane, who recorded live instruments for the game. What was it like teaming up with her once again?

Igarashi: She always delivers a solid soundtrack every time so I’m always comfortable commissioning her. We have been working together for so long that it’s basically like asking her to provide “the usual.” Recently, she has been into healing music, and we try to respect her creative will when she is composing. 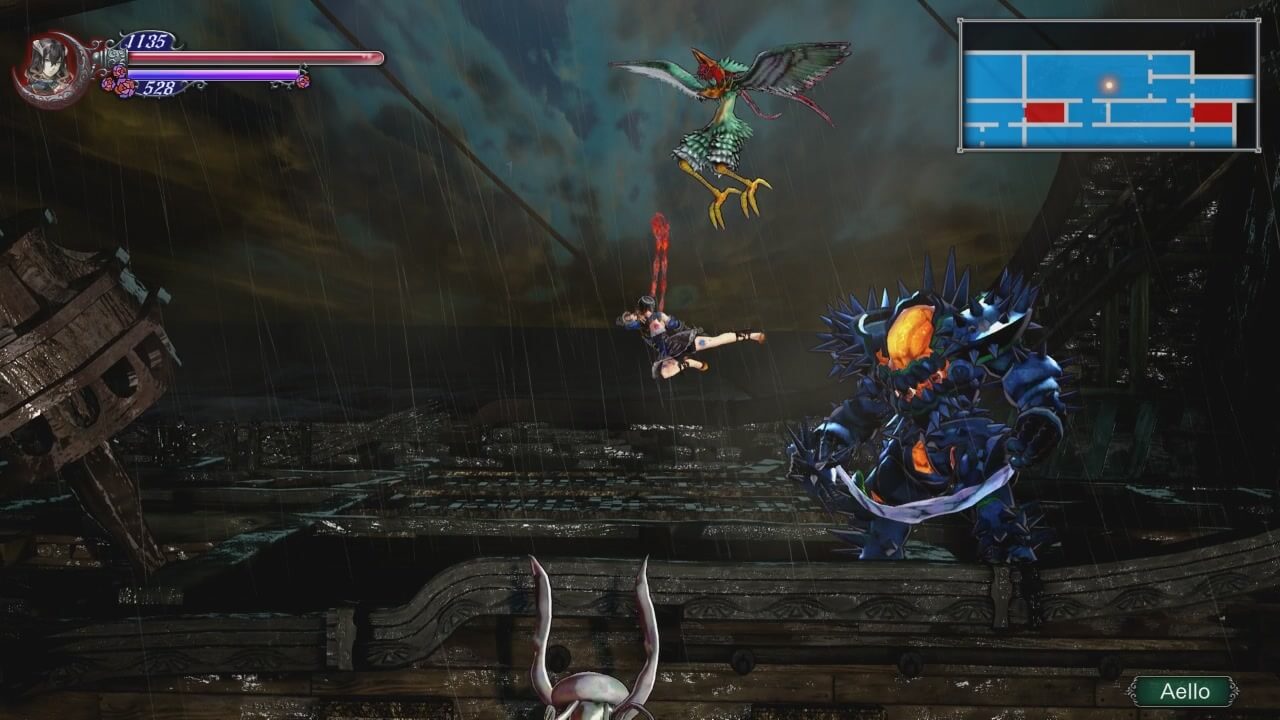 What made UE4 a good fit for Bloodstained?

It’s definitely the visual fidelity. We believe that UE4’s Physically Based Materials greatly improved the quality of the game.

Did the team have any favorite UE4 tools or features?

Igarashi: There are many features we liked, such as being able to copy and paste a LOD (Level of Details) setting to another LOD, which was very effective when we were optimizing the game in such a short amount of time near release. In addition, we were able to create many varieties by using Material Instances, and the Reference Viewer was very useful to see what assets were related. 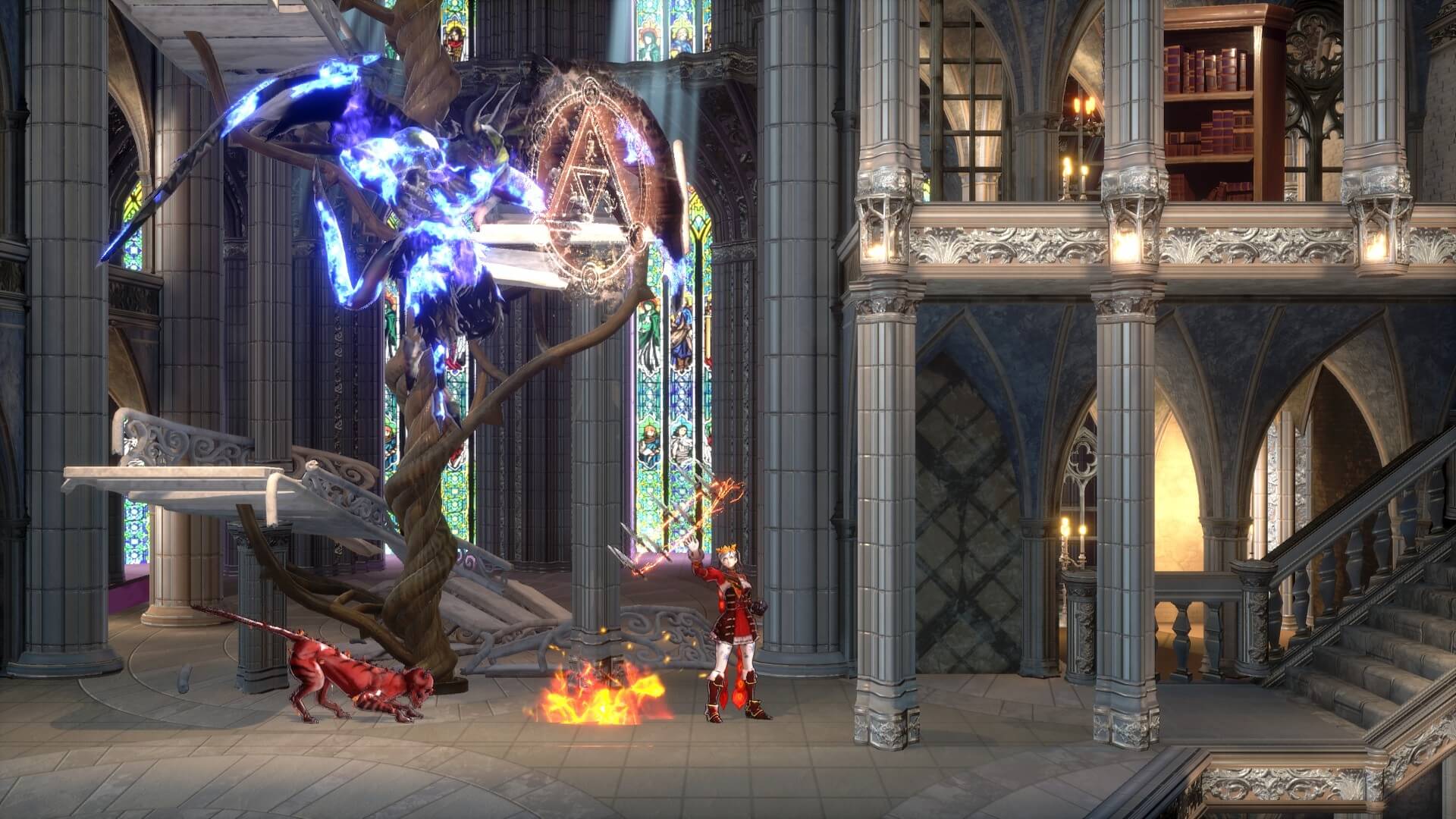 Bloodstained features a staggering amount of content out of the gate, still, the studio said that the game will also feature 13 DLCs for free. Can you elaborate on the studio’s generous efforts here?

Igarashi: To be honest, there are some features that should have been in the main game, but due to the size of the game and support from various studios, they are broken down to DLCs. With incredible support from 505 Games, WayForward, New Future Lab, and more, we were able to offer them this way. Everyone working on this project has a passion to deliver a great game, and that’s another reason why we’re able to continue.

With fans overwhelmingly praising Bloodstained and with many considering it arguably the greatest crowd-sourced game yet, how does that make the studio feel?

Igarashi: By seeing and hearing such praise from fans, we are simply very happy. It made us glad that we left a huge corporation to pursue it. With our newfound confidence, we are determined to continue to work hard while keeping our fans in mind.

Thanks for your time. Where can people learn more about Bloodstained: Ritual of the Night?

Igarashi: For more news on Bloodstained: Ritual of the Night, you can check out the game’s page on 505 Games’ official website as well as our Kickstarter page.