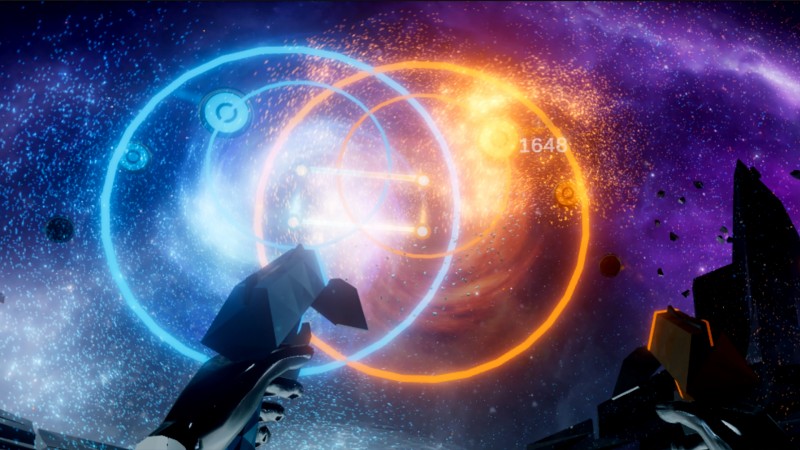 For over twenty years, Harmonix has been guided by a mission to bring the joy of music to more people, offering experiences that tap into the emotional core of interacting with great tunes, even if you’re not a musician. The studio virtually defined the modern music/rhythm genre as we know it, as the original creators behind both Guitar Hero and Rock Band, not to mention Karaoke Revolution, Dance Central, and Amplitude, among dozens of other titles. Today, the veteran developer is pulling back the curtain on its latest endeavor, a VR rhythm/shooter called Audica.

“It’s an inventive word that is meant to simultaneously evoke sound and music, as well as a sense of place,” says Harmonix co-founder Alex Rigopulos. “We really wanted to create a place for the player to go that felt special, and allude to that in the name as well.” Rigopulos is more than a spokesperson for the project; as a VR enthusiast who has been looking for the right way to do a music-focused shooter for years, Rigopulos is taking on the role of creative director for the project.

“Back in 2014, we did a closed beta for a prototype game called Chroma,” Rigopulos says. “At the core of every great action game, there is a core mechanic below the level of gameplay that is incredibly pleasurable. There’s a joy-producing feeling of feeling the rhythm, locking into a beat and locking onto a target. At the time, it was dressed up as a team PvP first-person shooter. It had all these other trappings that were competing with the core gameplay itch. It was set aside.”

Years later, as VR has begun to gain steam, the team at Harmonix was still musing about that potential, and simultaneously playing and enjoying some of the other music-focused VR games that have hit the market. Even as Harmonix began to experiment again with a purer reflection of the concept it had abandoned with Chroma, it coordinated with one of the developers working in-house at Harmonix, Ryan Challinor, who had been working independently on a similar guns-and-music concept. Challinor is now credited for helping with design and code on the game. Audica began to take shape; “We stripped away all the stuff that was encumbering the music shooter idea from Chroma, and just went 100 percent focus on gameplay and sensory immersion,” Rigopulos says. “We’re thrilled by the results.”

Audica plays as a dual-wielding VR shooter. Targets of different colors and shapes are flung toward you from multiple directions, almost like a reverse skeet-shooting experience. A concentric and closing circle around each note indicates the precise moment at which you should shoot each target, even as thumping electronic music beats lend a futuristic and rhythmic core to the action. The style will feel recognizable to players who enjoy successful VR projects like Audioshield and Beat Saber, but the addition of the shooting mechanic and precision aiming adds a whole new dynamic. And, like virtually all of Harmonix’s previous work, the real depth emerges as you boost your difficulty settings. Audica turns from a simple beat matching experience into an incredibly challenging game of concentration, Zen-like flow, and an almost choreographed feeling that sits in the odd but satisfying space between pulp sci-fi raygun wielder and ecstatic teenage rave-dancer.

“Choreographic is exactly the correct word,” Rigopulos says. “In some ways, even though this is a rhythm/shooter, some of the language we used early on when we were designing it was the language of a dance game. We wanted the gameplay to be highly physical, and provoke a lot of motion and performative qualities from the player.”

Audica focuses on a broad array of electronic music as its audio palette. “The Audica soundtrack includes everything from household names and world-class electronic artists to electronic artists that many people may have never heard of, but that are just incredible hidden gems,” Rigopulos says. “We want to introduce the world to some of these amazing electronic artists through the gameplay and the soundtrack.” The game is currently targeted to include 70-80% licensed music, while the remaining music will come from Harmonix “friends and family,” which has been a common approach for the studio over the years.

The early access version of Audica will include ten songs when it releases, and Harmonix is ready to share the first five announced inclusions.

I had the chance to spend several hours shooting my way through the songs of Audica. My first impression reminded me of the sensation I had when I first picked up a Guitar Hero controller: “How has this game not already been made?” The precision shooting in VR is a fun experience in its own right, as different shots come rocketing in your direction. Blue and orange targets must be hit by the correct colored gun. Some targets demand you turn the gun on a side grip. Others require a sustained trigger pull, or holding the trigger and dragging the target shot in a wide sweeping curve, even as your other weapon is fending off a new swath of incoming projectiles. As the difficulty escalates, your field of vision fills, and you’re forced to abandon singular ocular focus and rely, in part, on your peripheral vision. The beats come faster, you internalize the rhythm, and your mind drops into that pleasant trance that music game aficionados chase with such passion.

Those fans won’t have long to wait to try out Harmonix’s newest project. Audica is steering toward a release on early access for Oculus Rift and HTC Vive on March 7, with an initial 10-song lineup. The full version is targeting release by the end of 2019, and the studio hopes to expand to other VR platforms like PSVR and Oculus Quest if the opportunity presents itself.

Want to see the game in action? Check out the (frankly awesome) announcement trailer below.