EFLA supercharges its road and infrastructure visualization pipeline with Twinmotion

EFLA supercharges its road and infrastructure visualization pipeline with Twinmotion

In Icelandic, the word efla means to strengthen or reinforce. It’s an apt name for the largest civil engineering and consulting company in the country, with its history stretching back nearly half a century and a strong ethos of supporting the development of customers and society.

Based out of Reykjavík with branches across the country and affiliated companies around Europe, EFLA offers a variety of general engineering and consultancy services. In its road and infrastructure visualization pipeline, the firm has moved away from traditional solutions over the past year and started using Twinmotion, a real-time immersive 3D architectural visualization tool.

“We were using the regular collection of Autodesk products to render most of our visualizations before we were introduced to Twinmotion,” says Thor Bragason, Visualization Specialist at EFLA. “When we saw the quality of the renders from Twinmotion compared to the time it saves over traditional rendering, there was no question about whether or not to go for it.”

The team has since used the software on a number of large infrastructure projects, including visualizing a new foot and cycle bridge at the Ullevaal Stadium in Oslo, Norway, and a busy section of highway on the southwestern coast of Iceland.

The new bridge that has been designed at the intersection of the Ring 3 motorway and Sognsveien road in Oslo replaces temporary bridges built in 1990. Traffic has become increasingly heavy in the area, and the old bridges no longer meet the requirements of pedestrians and cyclists. In order to minimize the inconvenience to neighboring facilities such as Ullevaal Stadium, the Norwegian Geotechnical Institution, and Blindern High School during the construction phase, a detailed phasing plan was drawn up.

Aimed at improving traffic safety and increasing the capacity of the pedestrian and cycling network, the project entailed designing a new layout of footways and roads, upgrading drainage and lighting systems, creating a landscaping scheme, reconfiguring electrical and communications cabling in the area, geotechnical design, environmental studies, and the auditing of nearby buildings. EFLA carried out the tender design, working alongside Brownlie Ernst and Marks Architects. 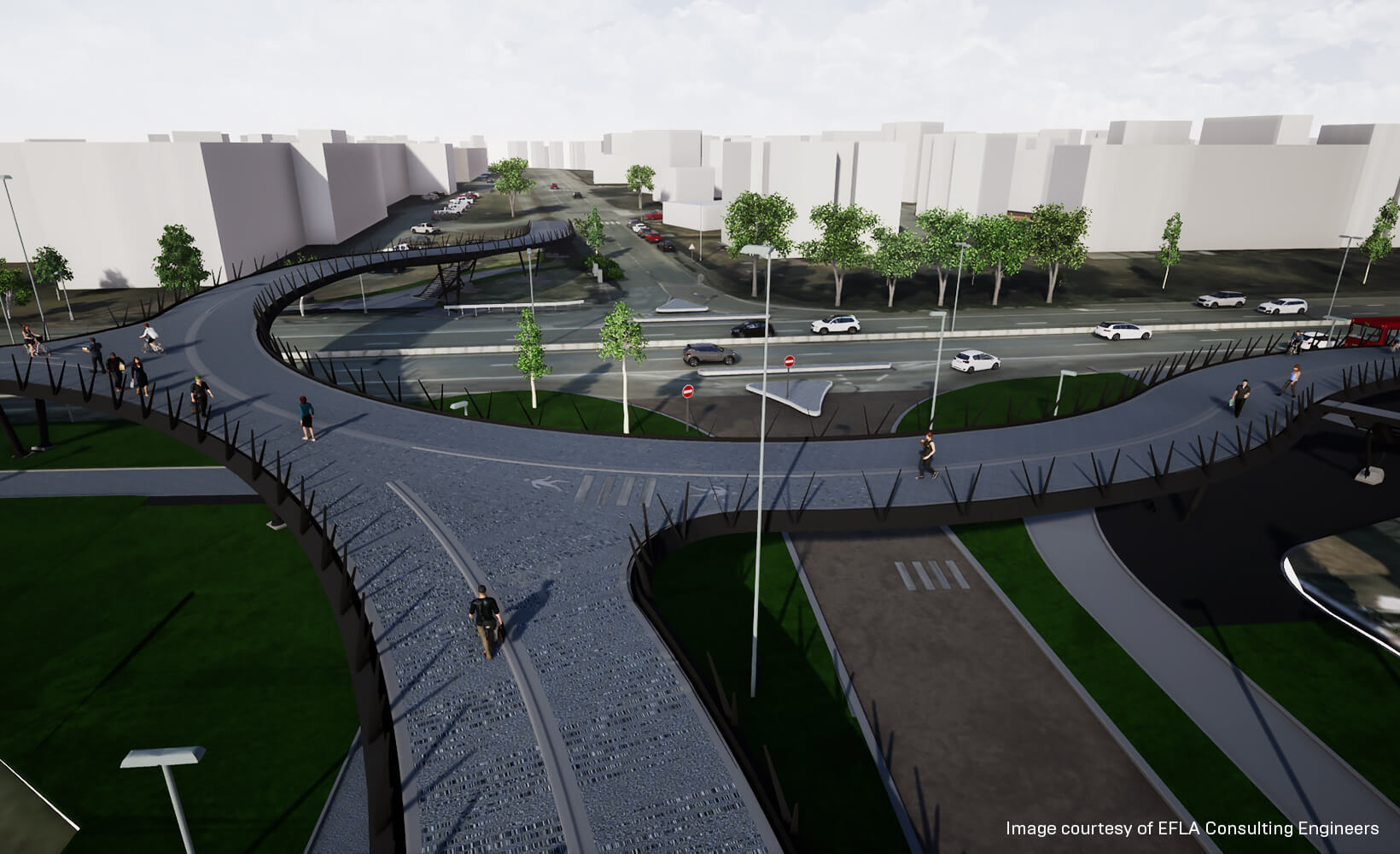 The EFLA team used Twinmotion to create a video of the intended works, which was shared via social media and more traditional media outlets. “In cases such as roads and bridges, we export directly from Revit to Twinmotion and work from there,” says Bragason. “We only go to DCC software such as 3ds Max or Maya when there are special adjustments needed, usually involving some surface issues that DCC software handles faster. Some of the other CAD-based suites we use require us to export to FBX or OBJ first and then import into Twinmotion, but that’s no deal breaker for us. We normally find ourselves using Twinmotion for final rendering and presentations, as well as ideation and prototyping.”

The project took longer than the team had expected because its clients ended up asking for more details when they saw what EFLA could deliver. “We used the localization option in Twinmotion to quickly add more buildings around the focus areas. The population of the scene with details was a breeze, and it was more about knowing when to stop adding details than anything else,” explains Bragason.

This ability to quickly change the environment based on a client’s feedback is one of the things that most appeals to Bragason. “Time and resources are always something that we keep in mind when working on projects,” he says. “With Twinmotion, we have more time for iterations and experimentation. The low entry threshold is also a great incentive to get our in-house users to try out the software as well. My personal favorite is the fact that I don’t have to spend time collecting assets from different object libraries or worrying about different formats and levels of detail.”

Visualizing a highway in VR

EFLA has also been involved in an ongoing design project focusing on a 3.2 km section of the Route 41 highway (known as Reykjanesbraut in Icelandic) that runs through the port town of Hafnarfjörður. The aim of this project is to improve traffic safety and traffic flow, lower noise levels, and provide better transport between districts in the town. 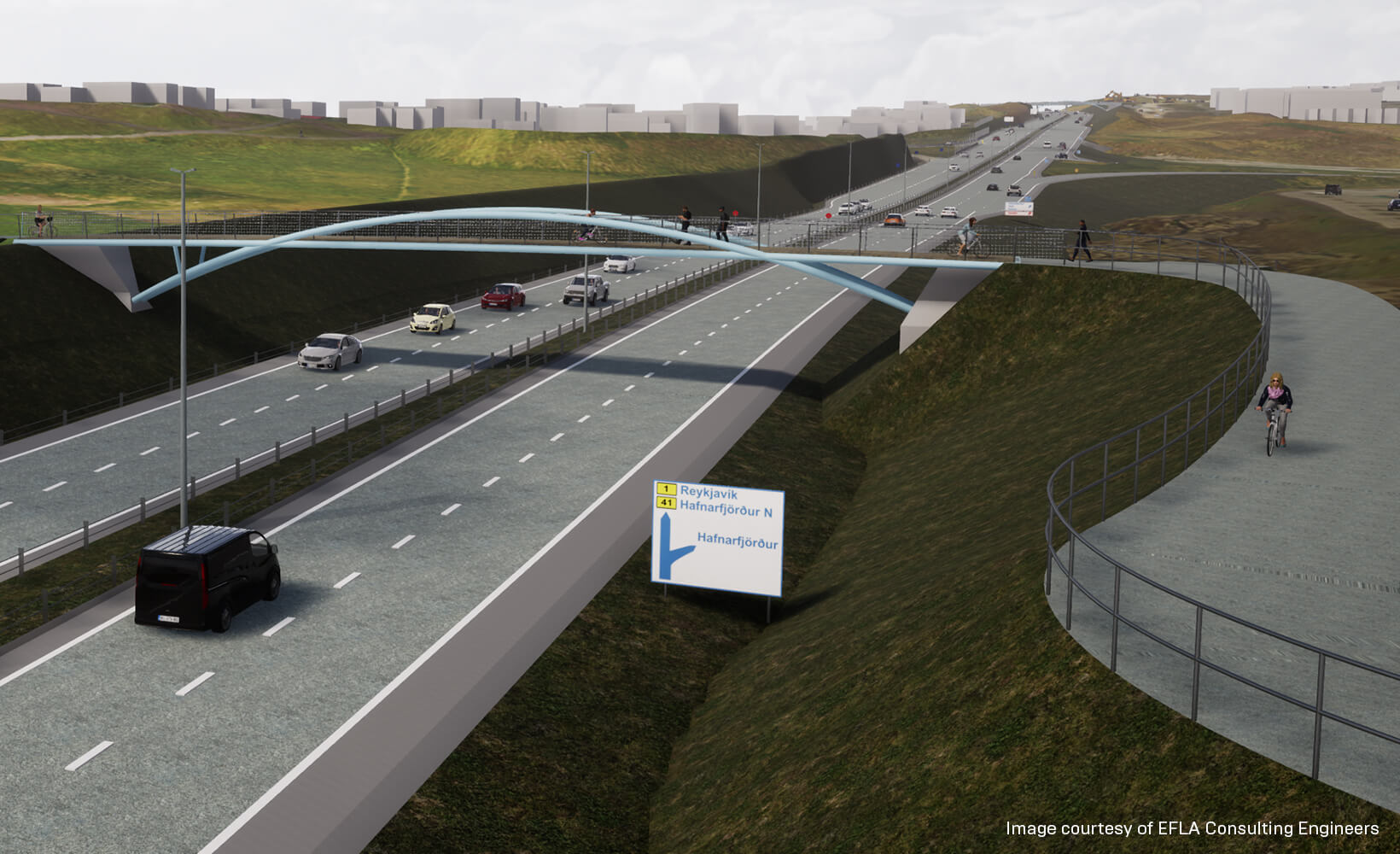 Using Twinmotion, the team created visualizations that were used to present the proposals to people directly affected by the road in its current condition and give them a sense of how the new road will be an improvement. “We used both traditional video and also a VR presentation that we made available to people during a town hall event,” says Bragason. “The main stakeholders in the project are the road authority, the municipality, and the residents of Hafnarfjörður. People loved being able to cross pedestrian and cyclist bridges that aren‘t there yet, and the leapfrog-style VR travel made it so not one user reported feeling queasy or disoriented.”

Including a VR aspect proved an excellent way to communicate how the final construction would look, providing a sense of scale and location. “People are much quicker to orient themselves in a virtual environment than by looking at 2D images or printouts on a table,” says Bragason. “The ability to stand on an unbuilt bridge and look over the area was something that people found really appealing. Some people even teleported right onto the ground between the highway lanes. Risky behavior without consequences—who doesn’t love that?”

Going forward, the highway model may be used in visualizations that inform people about speed limit changes, as well as possible detour requirements for when construction hits full speed. And while final numbers are yet to be tallied up, the team estimates that using Twinmotion has had a significant impact on its turnaround time for the project. “We’ve spent far fewer hours on it by using Twinmotion for visualization than if we’d used more traditional 3D software,” says Bragason. 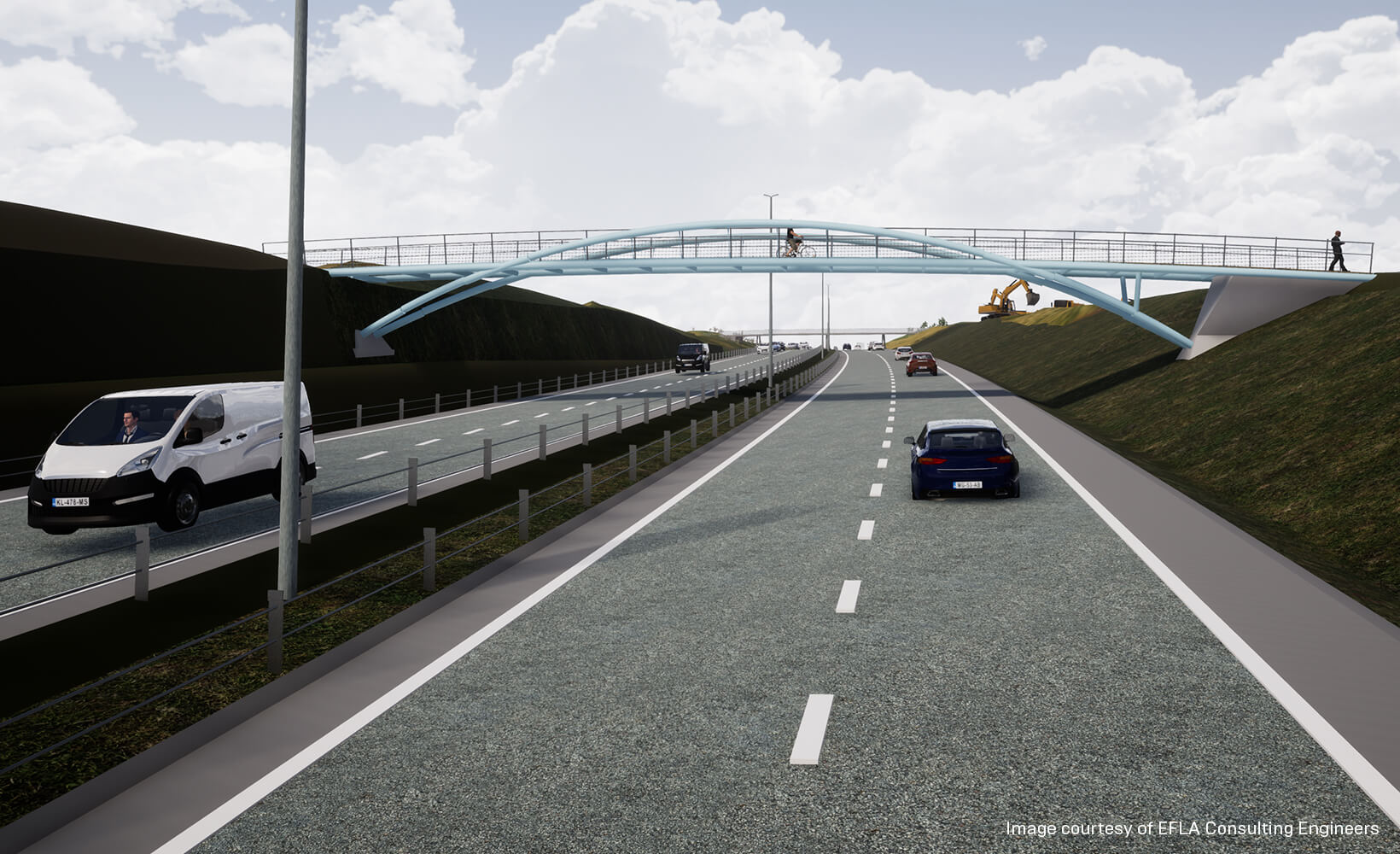 As well as large-scale infrastructure projects, EFLA has also used Twinmotion as a supplementary tool when competing for landscape design projects, and also as a quick visualization tool when working on projects for the company responsible for Iceland’s power grid.

The first Twinmotion landscaping project involved visualizing an outlook platform on top of a mountain called Bolafjall on the west fjords of Iceland. “It’s a very high mountain with extremely steep slopes,” Bragason explains. “We got a model of the top surface along with a part of the slope, and then combined our design with the actual environment. We added life into the barren landscape by adding moving cars, people, and even seagulls—there are so many seagulls in that area! All the props were from Twinmotion.”

The team was asked to deliver extra video content, and used Twinmotion to tell the story of visitors being able to walk beyond the edge of the mountain or just stroll on the top of it. Bragason sums up the appeal of using real-time technology: “Quick, high-quality results, believable scenarios, less time spent on sourcing assets,” he enthuses. “It feels more like play than work, which frees up creative flow. With less time spent on waiting for results, you get more time for iteration and testing/failing/succeeding. 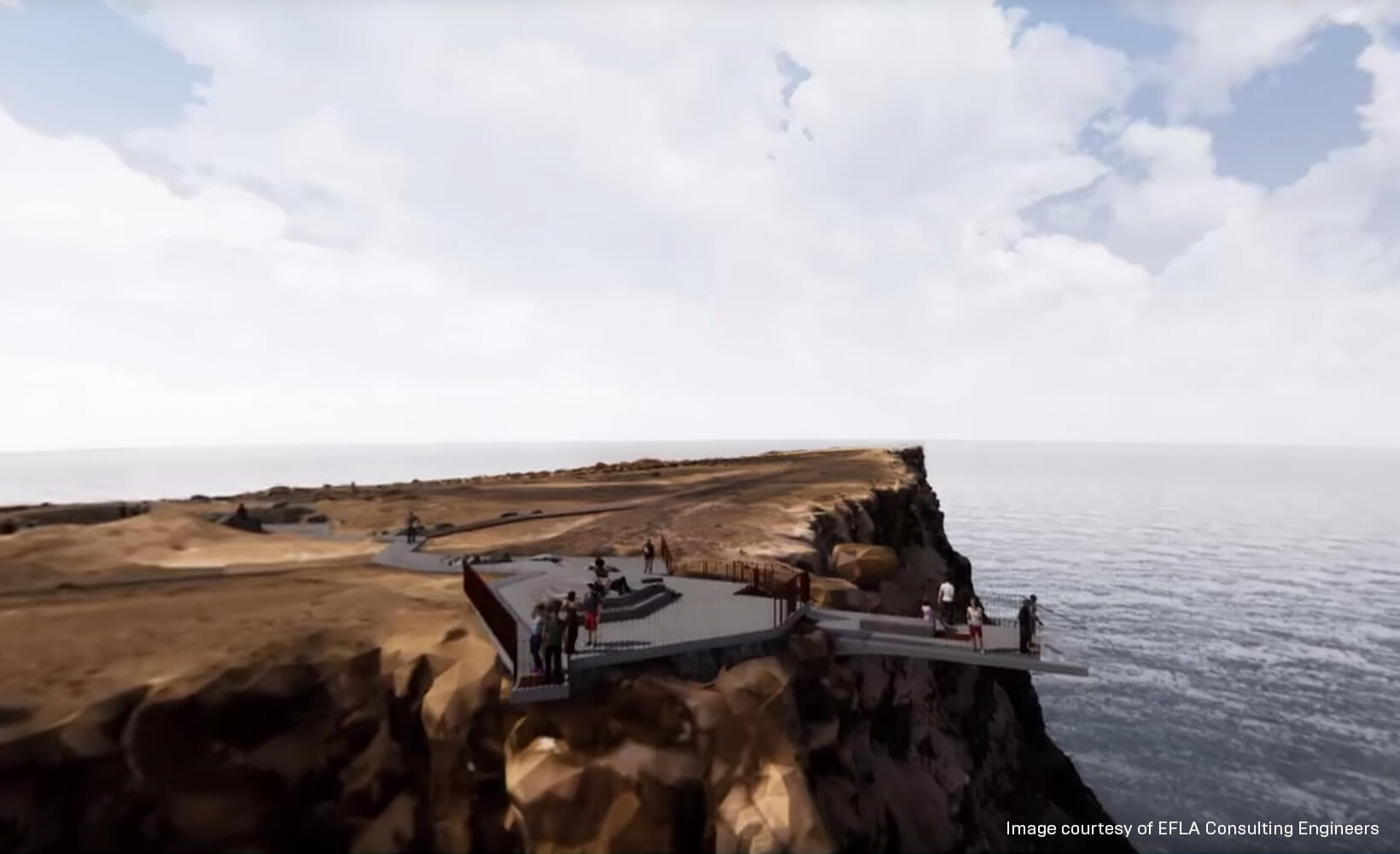 “Twinmotion is an integral part of my toolset now, and I ask myself ‘Does Twinmotion fit in with this project?’ at the beginning of every project that I start.”