Last year during GDC, Epic kicked off an all-new initiative designed to celebrate the global development community as teams from around the world converged inside a new, second booth to showcase their amazing work in Unreal Engine.

After three jam-packed days of demos, food, fun, and beer during last year’s show, we’re thrilled to let you know that we’re bringing this dedicated games booth back at GDC 2019. 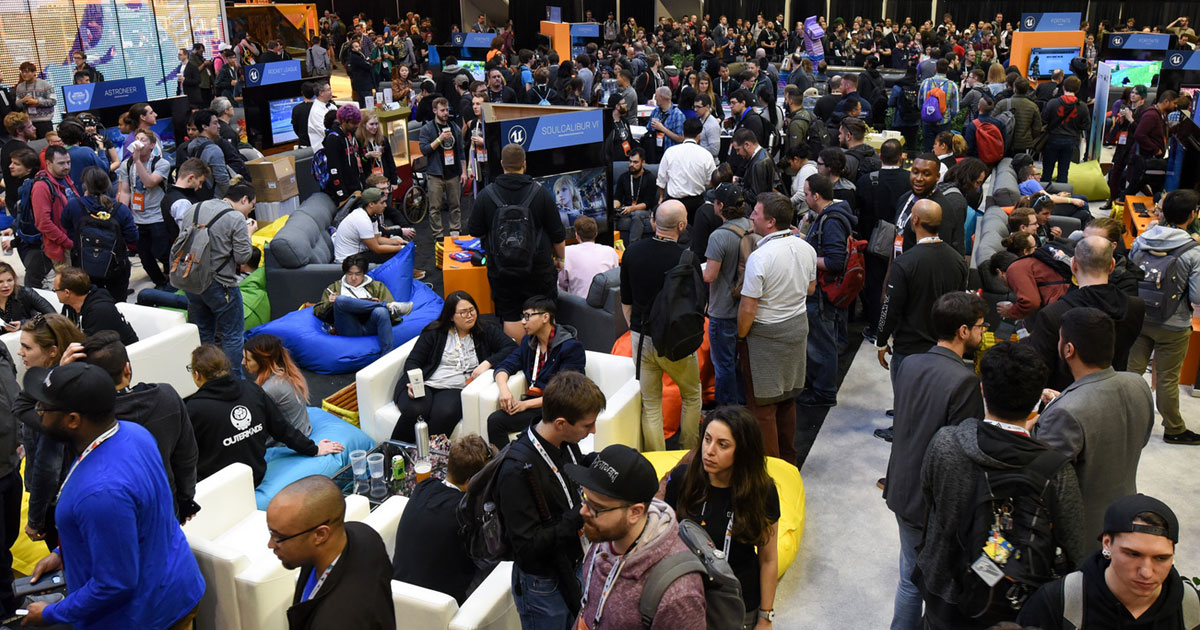 Check out dozens of games in our booth at Moscone South #327 throughout all show floor hours. From the amazing Kingdom Hearts III by Square Enix to the whimsical Kine by solo indie developer Gwen Frey, we’ll be featuring a fantastic mix of teams and titles across all genres and platforms. Of course, Unreal Engine tools demos will still be featured in our neighboring booth at Moscone South #349.

Today we’re announcing a few of the titles that will be in our games booth, but we’ll be updating this post in the coming weeks to reveal even more! Here are just a few of the games you’ll be able to get your hands on inside our booth at GDC 2019:

Innerspace VR | Vertigo Games
Bend and twist reality in A Fisherman's Tale, the VR puzzle adventure game in which being turned upside down and inside out is not merely a play on words.

BANDAI NAMCO Entertainment America Inc
Putting gamers in the cockpit of the most advanced war planes ever developed, ACE COMBAT 7: SKIES UNKNOWN delivers the ﬁercest air combat experience ever created through photorealistic visuals, intense dog-ﬁghting action, a multitude of authentic and futuristic aircraft to ﬂy, an immersive storyline, and even virtual reality!

Kunos Simulazioni | 505 Games
Assetto Corsa Competizione is the new official Blancpain GT Series game. Thanks to the extraordinary quality of simulation, you can experience the real atmosphere of the FIA ​​GT3 homologated championship, competing against official drivers, teams, cars and circuits.

Close to the Sun

Storm in a Teacup | Wired Productions
Close to the Sun is a horror game that takes place at the end of the 19th century on a mysterious ship complex created by Nikola Tesla for the sake of knowledge. In this alternative version of history, his scientific breakthroughs have already had a major impact on the world.

You’re Rose, a young journalist looking for your sister and, as you approach this enormous and glorious complex for the first time, you quickly realize that something there has definitely gone wrong…

Marvelous Inc | Nintendo
Daemon X Machina is a brand-new, fast-paced mech action game from Kenichiro Tsukuda that is coming to Nintendo Switch. Take your Arsenal, a fully customizable powered suit, out for an array of missions to surmount the enemy at all costs. Choose and equip your Arsenal with a multitude of weapons, obtain more from downed enemy Arsenals, and swap them on the fly to suit your strategy in the face of ever-changing threats.

Overgrown | Crytivo
After washing ashore on Softshoal Island, you are given a chance at a new life. A plot of land awaits your green thumb to transform it into a booming farm, and a new world beckons you to explore its secrets.

Farm Folks offers a delightful mix of RPG and farming mechanics, giving you the freedom to get lost in the world while you build a farm from the ground up. There are many friends to be made, many crops and animals to tend, and a whole island to discover.

Brace Yourself Games
Create a sprawling industrial city. Compete with the other Great Houses of Titan for resources, territory, and power. Do battle with ships, technology, influence, or the sheer productive power of your factories. Stake your claim to the Industries of Titan in this innovative sim/strategy game!

BANDAI NAMCO Entertainment America Inc
For the first time ever, the most famous Manga heroes are thrown into a whole new battleground: our world. Uniting to fight the most dangerous threat, the Jump Force will bear the fate of the entire human kind.

Celebrating the 50th anniversary of the famous Weekly Jump Magazine, Jump Force is also making the most of latest technologies to bring characters to life in a never-seen-before realistic design.

Gwen Frey | Chump Squad
Kine is a 3D puzzle game about three whimsical machines that aspire to be musicians. Embark across a theatrically-rendered cityscape by solving increasingly difficult 3D puzzles. Guide Euler, Quat, and Roo as they struggle to form a band and find their big break! Learn more about Gwen and the game by watching this Unreal Engine livestream.

SQUARE ENIX
KINGDOM HEARTS III tells the story of the power of friendship as Sora and his friends embark on a perilous adventure. Set in a vast array of Disney and Pixar worlds, KINGDOM HEARTS follows the journey of Sora, a young boy and unknowing heir to a spectacular power. Sora is joined by Donald Duck and Goofy to stop an evil force known as the Heartless from invading and overtaking the universe.

Through the power of friendship, Sora, Donald and Goofy unite with iconic Disney-Pixar characters old and new to overcome tremendous challenges and persevere against the darkness threatening their worlds.

Cosmoscope GmbH
Morphies Law is a robot morphology-driven 3D shooter with a simple basic law: each weapon hit transfers mass from the victim’s damaged limb (making it shrink) to the corresponding limb of the attacker (making it grow).

AOne Games | SOEDESCO
Omen of Sorrow is a classic 2D, four-button fighting game with a cast of characters inspired by classical horror, fantasy and mythology, and a battle system designed from the ground up to leverage player skill, rather than stats or random chance. Omen of Sorrow features deep combat mechanics that favor movement and spacing over tight execution to provide an engaging experience for pros and newcomers alike!

Learn more about the development of Omen of Sorrow in this Unreal Engine interview.

Remnant: From the Ashes

Gunfire Games | Perfect World Entertainment
Remnant: From the Ashes is a third-person survival action shooter set in a post-apocalyptic world overrun by monstrous creatures. As one of the last remnants of humanity, you’ll set out alone or alongside up to two other players to face down hordes of deadly enemies and epic bosses, and try to carve a foothold, rebuild, and then retake what was lost.

Shifting Tides | Iceberg Interactive
The Sojourn is a thought-provoking first-person puzzle game in which you traverse the parallel worlds of light and darkness in search of answers to the nature of reality.

Echtra Games | Perfect World Entertainment
Torchlight Frontiers combines the heart of the beloved Torchlight series with a shared, persistent, and dynamically-generated world. In true Torchlight style, players will team up with friends and devoted pets to hack and slash their way through a vibrant world, discover ancient ruins of lost civilizations, and brave dungeons filled with dangerous creatures, deadly bosses, and of course, loads of loot!

But that’s not all… Check back here soon as we announce additional titles for the booth and be sure to follow up on Twitter and Facebook for all of the latest on GDC 2019. If you’d like to receive email updates about our GDC 2019 plans and announcements, you can sign up here.