The high-octane John Wick: Chapter 3 – Parabellum is a neo-noir thriller that plays out against some visually stunning backdrops. Director Chad Stahelski and Production Designer Kevin Kavanaugh had an expansive vision for the look and feel of the film, relying upon the art department to bring John Wick’s world to life.

One of the artists on that team was Alex Nice, a concept illustrator for film with a background in art direction that includes three years working at VR/AR experiential company Magnopus. Nice quickly saw that one environment for the third act of the film would be particularly challenging to design.

The “glass office” was a huge, multi-million dollar, physically built set made almost entirely out of glass that was to be the location for a number of complex fight sequences between John Wick and his adversaries. “The design challenges involved with a set like this are huge,” says Nice. “From the visual look, lighting, previs, and layout, it became apparent that 2D concept art wasn’t enough.”

Designing the set in a real-time environment

Nice started with concept art using CAD designs from a set designer. “I was able to bring these into Unreal Engine so that we could explore the set in VR,” he says. Drawing on his previous experience of working with real-time technology, Nice chose Unreal Engine for its ease of use and high-quality visuals. “To me, UE4 seems like it’s built with the artist in mind,” he explains.

The immersive environment he developed became the tool the team used to visualize how the set would look, helping to make lighting and design decisions months before anyone had even set foot on the physical set. “It was such an abstract set that having this spatial relationship and visualizing it from that point of view had tons of value,” says Nice. This virtual environment became a hub in the art department. Actors, directors, and cinematographers all went into the VR model to visualize everything that was going to be seen in the film. 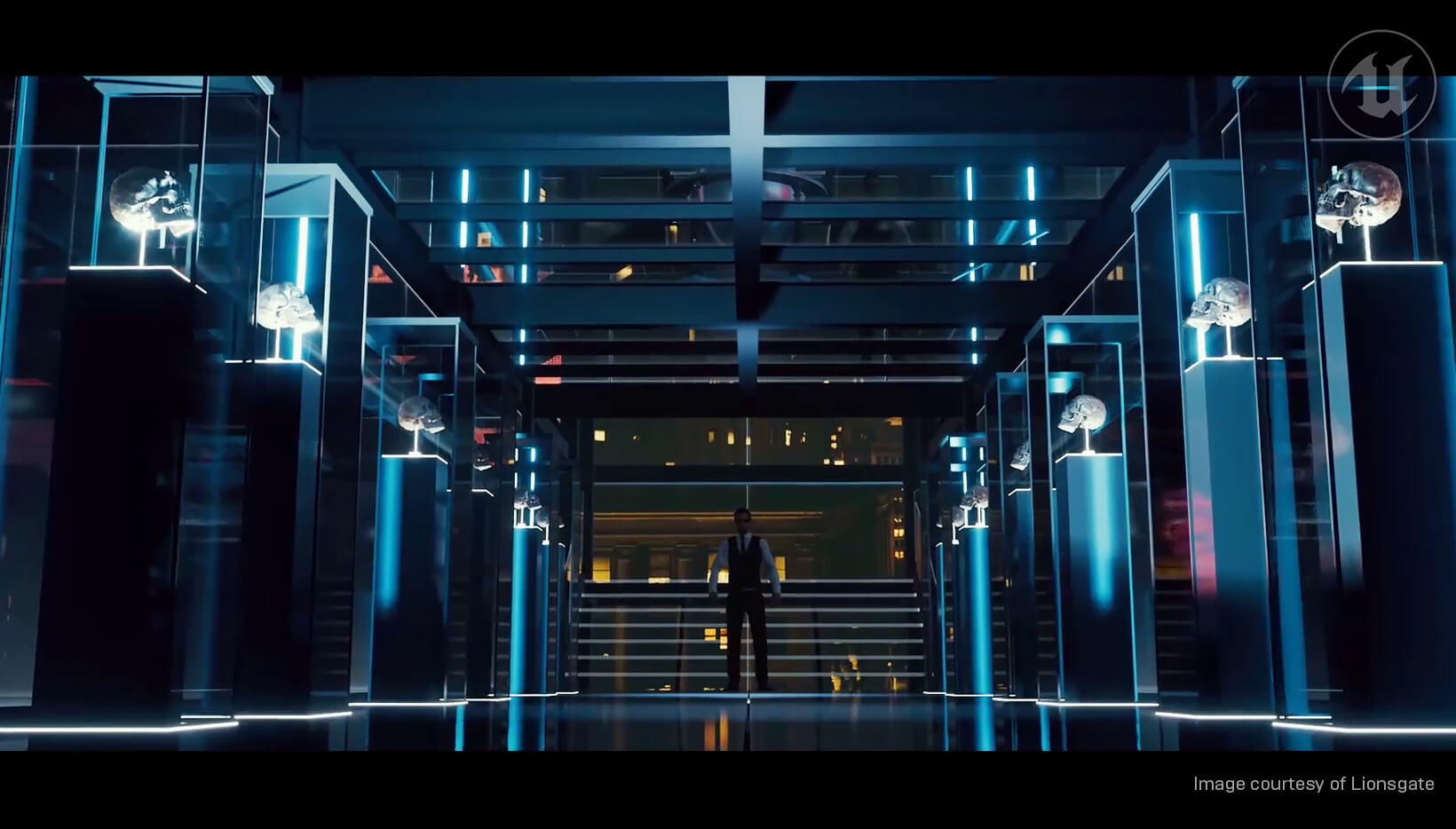 Nice leveraged the Blueprint visual scripting system to help the filmmakers test out different creative ideas. “Using Blueprint, I gave the cinematographer the ability to interactively switch though various lighting scenarios within the glass set using a HTC Vive controller touchpad,” he says. “This helped us figure out where to place the iconic LED lighting you see throughout the film.”

Similarly, to help the film producer make a call on how different set design options would affect the production budget, Nice created multiple building layout design options: three floors, two floors, and one small ultra-condensed layout. “I made it so you could interactively switch between the different layout options using the VR controller and see the spatial differences between the different cost options,” he explains. “This was a great tool for visualizing what did and didn’t work for different budget scenarios.” 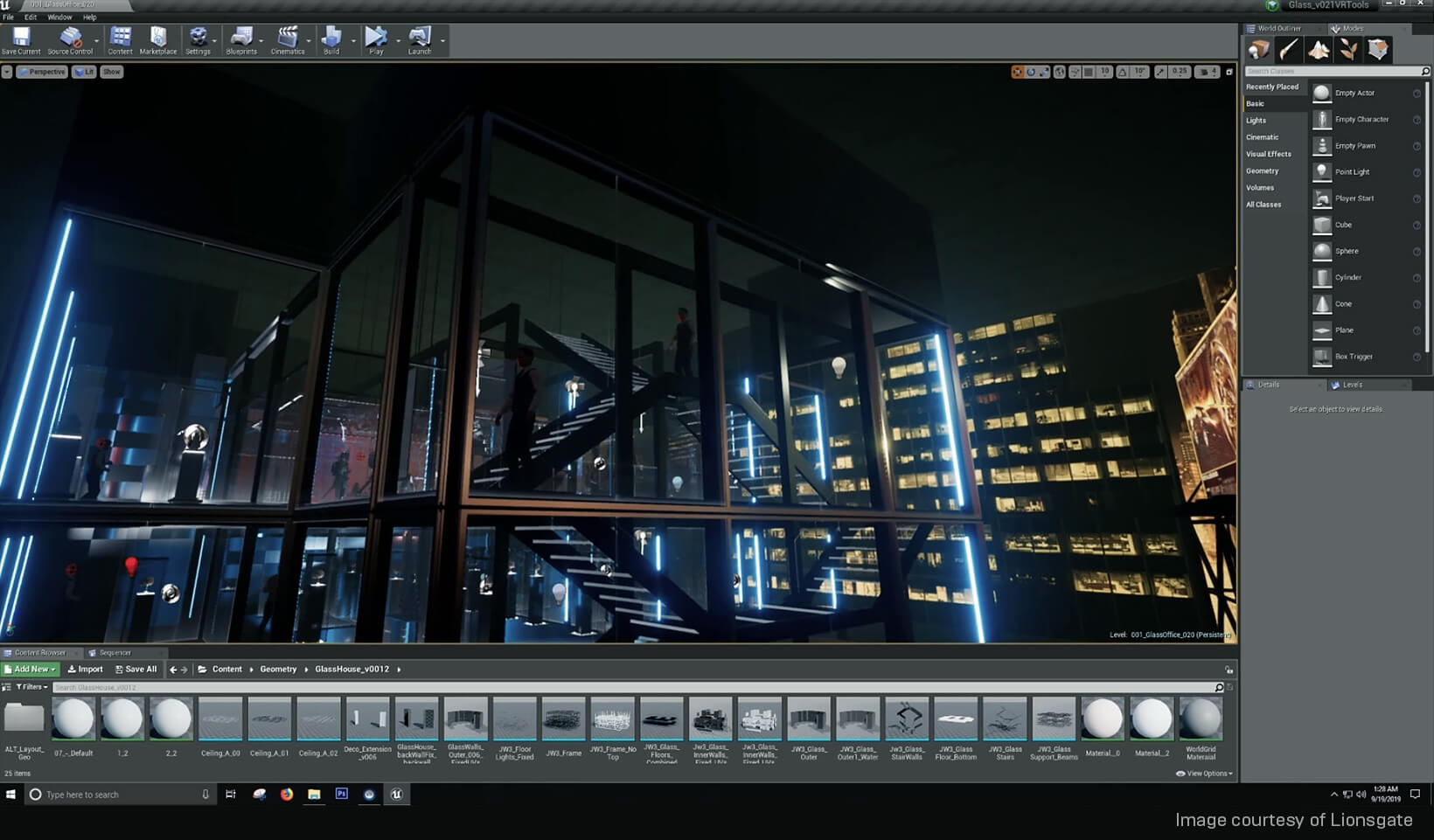 The immersive environment also played a significant part in helping the stunt team understand how the stunt choreography would work. “I made interactive henchmen in the scene and when you punched them, they went ragdoll and fell down the stairs. It was actually a fun game-like experience, and it was hilarious to see the stunt actors punching and kicking with the VR headset on,” says Nice. “Having the set in VR for the stunt team was instrumental in helping them understand the often purposely confusing layout of an all-glass environment. It was here they figured out a lot of the action.” 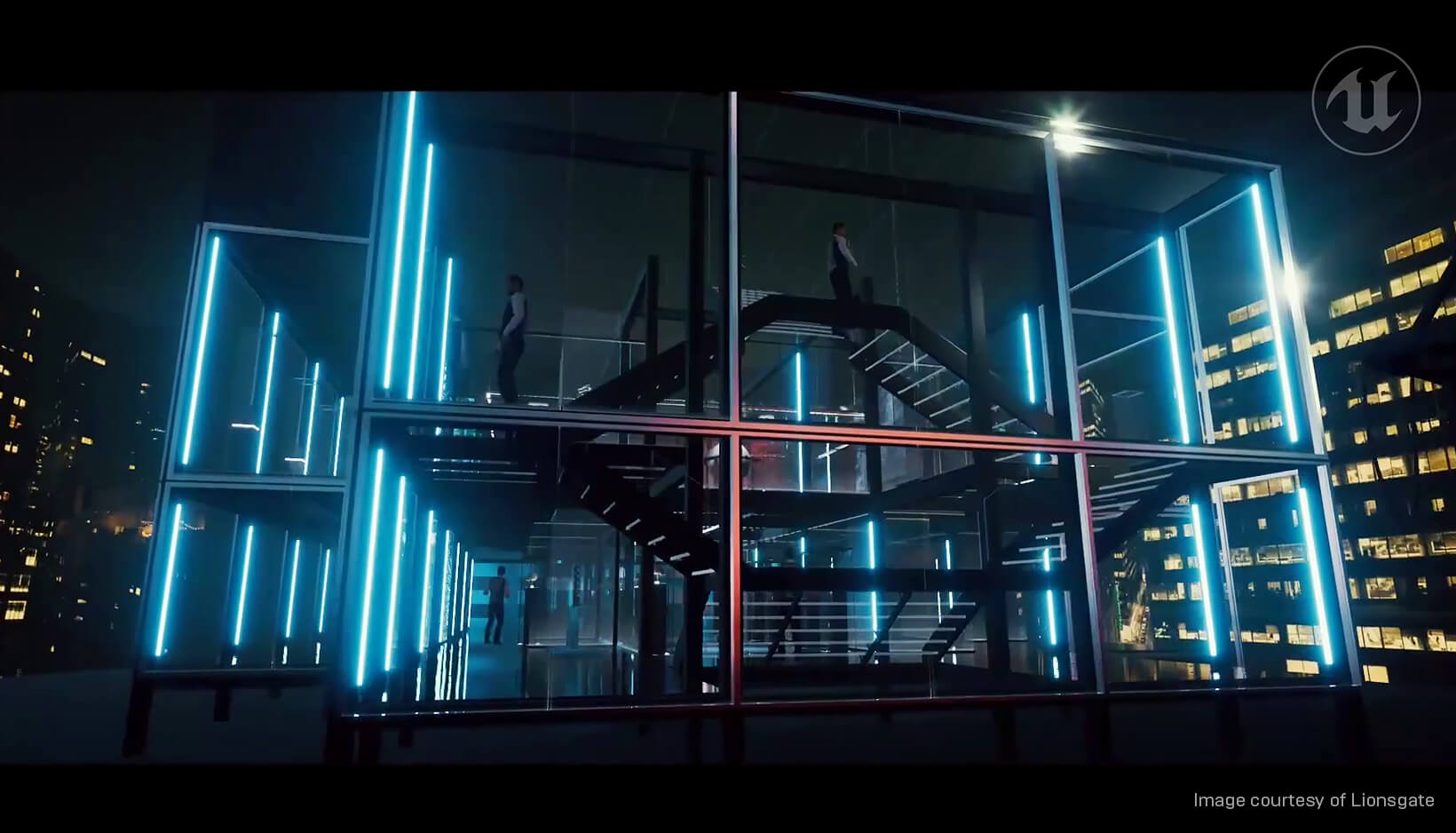 On the day of shooting, a hanging illuminated city backdrop would surround 180° of the physical glass set. Alex built the backdrop and the stage to scale in 3D, then placed the glass office VR model inside the 3D stage—all in UE4. He then accurately textured the 2D backdrop image to the 3D backdrop model. “This gave us a 1:1 recreation of how the set would look on filming day,” he explains. “So now in VR, you could see exactly where the backdrop worked and didn’t work within the set. We could interactively see any camera angles that broke the illusion.”

All of this testing and experimentation was done months before the set was physically built. “Typically in film, you have a set designer draw up plans and then wait months to see the final real-world result. Directors, stunt actors, DPs, everyone typically only has a few days of preliminary prep before actual filming has to begin,” says Alex. “As an art department film designer, VR and UE4 have enabled me to interactively and spatially explore these film environments with my team well in advance—and that’s a game changer. In film production, R&D prep time equals huge cost savings and allows everyone to maximize the creative potential of the environment.”

Immersive technology and the future of film production

From exploring different creative options to smoothing the signoff process, Nice believes immersive real-time technology had a huge influence on the look of this film. What’s more, he predicts interactive environments will become a mainstay of film production design. “VR has this ability to cross the 2D concept art and set design threshold, giving you a real feeling of what it’s going to be like to be there, which is just an incredible disruption in this industry,” he says. “I came onto the project a 2D artist, and in the end I was a VR developer. 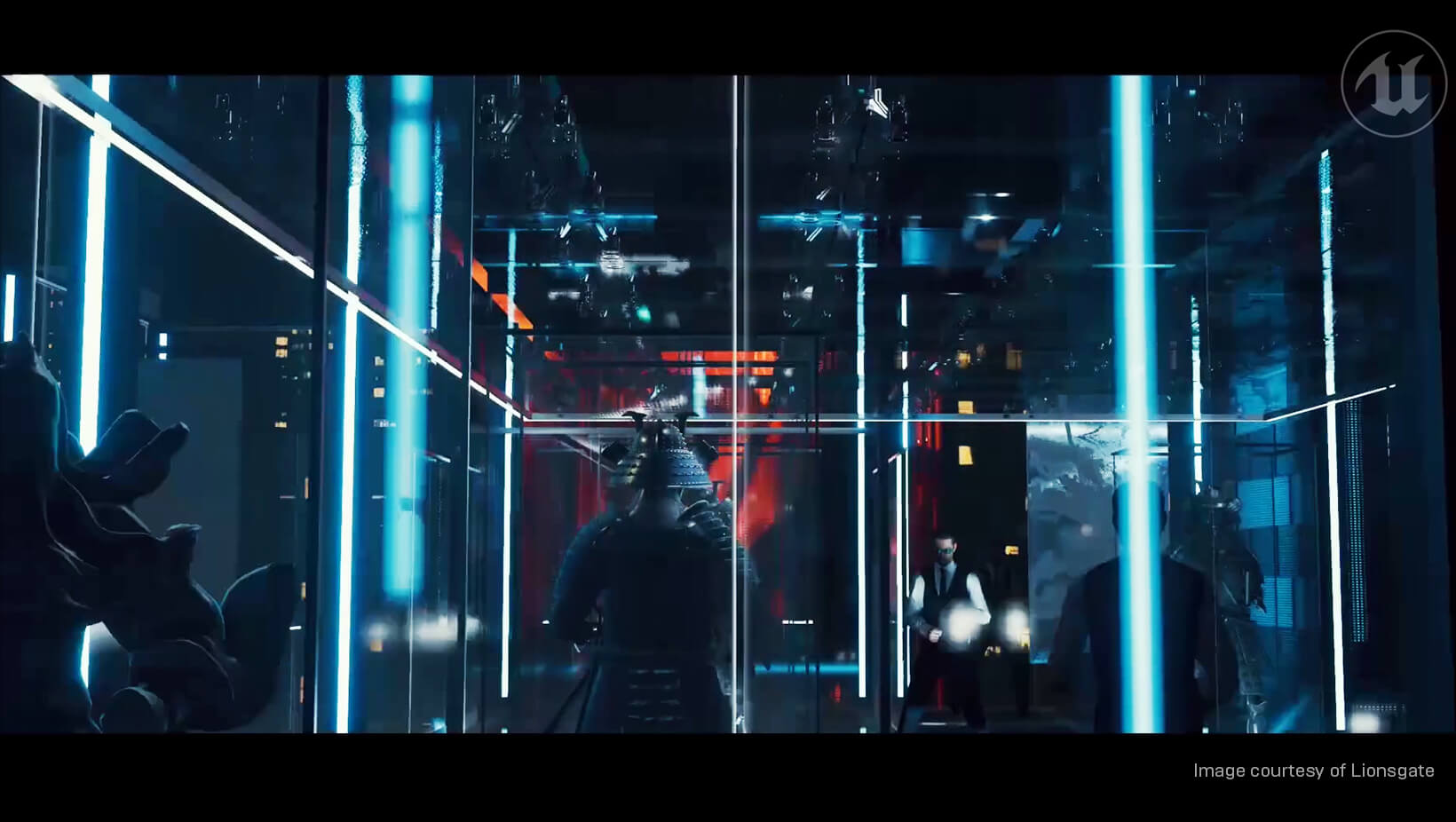 “Just being able to quickly and efficiently make something look good in such a minimal amount of time is amazing,” he continues. “Every single VFX artist I know is asking about Unreal Engine. And the reason why is the satisfaction of not having to hit that render button. Just seeing it in real time, that’s like heaven for a VFX artist.”

Want to explore the potential of real-time technology for filmmaking? Download Unreal Engine for free today!