With Dragon Ball Z arguably being the most popular anime series ever created, developer CyberConnect2 had their work cut out for them faithfully recreating Akira Toriyama’s beloved work for Dragon Ball Z: Kakarot. Fortunately, the Japanese developer delivered in spades on the artistic front with review sites like GameCritics writing that “the cartoon graphics perfectly recreate Toriyama’s visuals.”

To gain a deeper understanding of how CyberConnect2 nailed the game’s beautiful look, we interviewed Director Kazuki Kimoto and BANDAI NAMCO Entertainment Inc. Producer Ryosuke Hara. The two talk about how the game’s art team experimented with many different visual styles before establishing the game’s cel-shaded aesthetic. They also share how they faithfully re-created the series’ iconic characters, and reveal how they had to decouple head and body models to facilitate more costumes efficiently. Finally, the pair talk about how they had to occasionally deviate from the anime to flesh out the game’s 3D world, and Kimoto elaborates on CyberConnect 2’s artistic workflow.

Dragon Ball Z: Kakarot features a vibrant, slightly cel-shaded aesthetic. Did it take a lot of experimentation to nail the look of the game?

CyberConnect2 Director Kazuki Kimoto: We experimented with various art styles before deciding to go with the visual look we have now. Initially, the team was experimenting with watercolor styles found in art books and colorful manuscripts. Ultimately, in order to fit the style of the original works as best as we could, we decided to combine this with an anime-style direction. For example, we applied a light gradation to both the light and shadow section of a character’s shadow and implemented different expressions to make the color blur. Also, to achieve an anime-style look, we basically incorporated a cel-shader, which we did to experiment with different expressions to create a unique look for the game.

The character models look fantastic and represent faithful 3D recreations of their iconic anime counterparts. How did the team put them together?

BANDAI NAMCO Entertainment Inc. Producer Ryosuke Hara: One of the many challenges was making sure Goku’s gradual growth and change in the original works were kept consistent and also accurately recreated within the game. For example, Goku becomes stronger while fighting various strong enemies in the story, periodically his clothing changes; he gains access to new forms like Super Saiyan, etc. Of course, other characters such as Gohan and Vegeta also have had a wide variation of clothing styles throughout the series; keeping all this accurate was one of our biggest goals.

Kimoto: Considering this, our team had to create large amounts of unique assets for all of the different clothing styles. With this in mind, we separated the head and body models; this, used in combination with UE4, allowed us to speed up our production pipeline and increase efficiency. 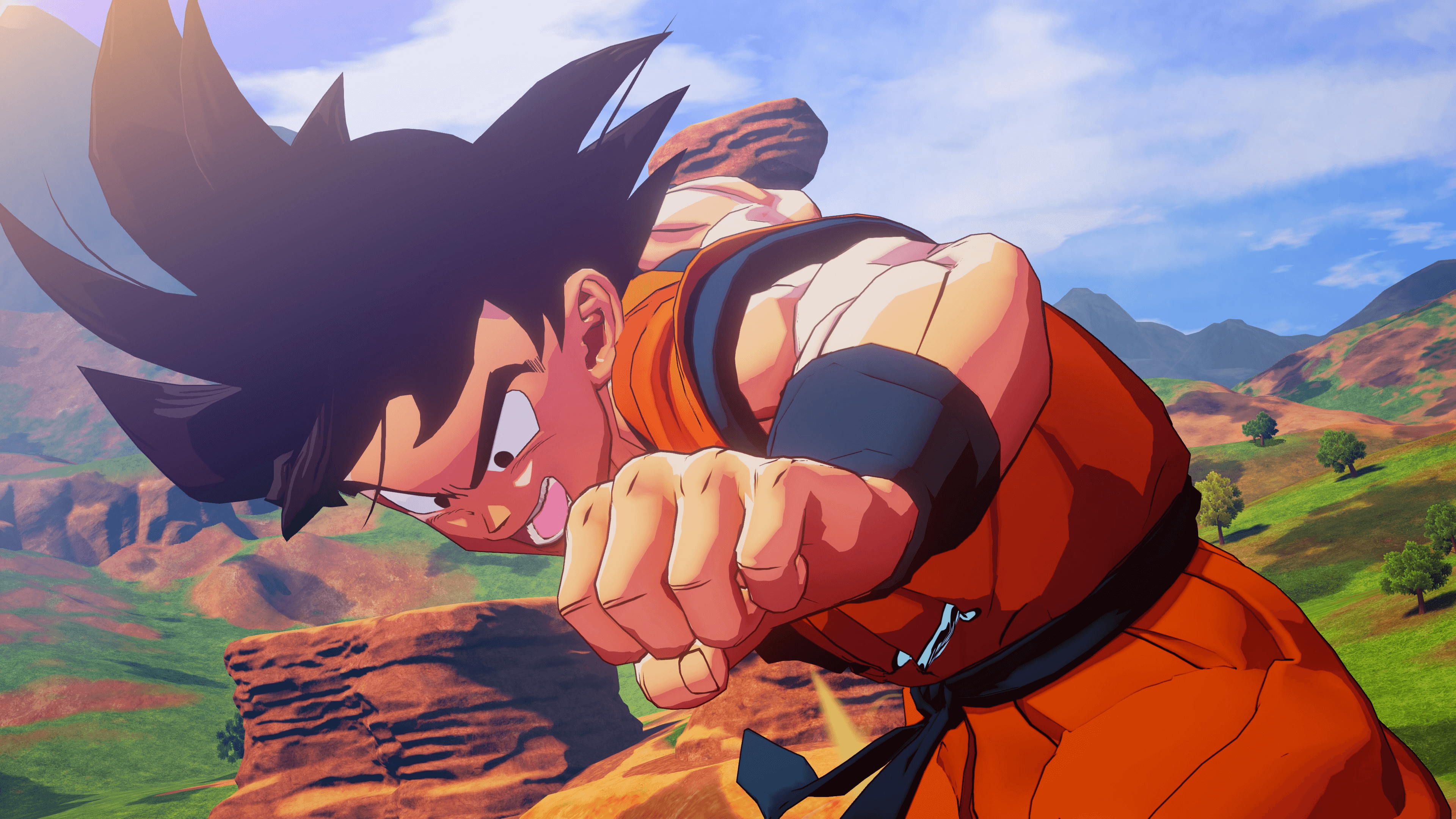 Dragon Ball Z: Kakarot’s environments have been praised for looking strikingly similar to the show at times. How did you approach recreating the backdrop of the game?

Hara: The game was mainly designed based on the anime, however, we made sure to take references from the manga as well. For example, the in-game world map was created based on very detailed information that appeared in the original works.

Kimoto: While flying over the vast area of the environment, we thought that if we just stuck to using only the few colors like you see in the anime, areas would just look plain and flat. So, we focused on making the textures slightly more realistic. This helps increase the amount of information the player can see on screen.

Dragon Ball Z: Kakarot features robust visual effects that showcase dazzling uses of fire, electricity, and explosions. How did the team pull off the amazing VFX in the game?

Kimoto: The art direction of the auras that were used in the cinematics were based on hand-drawn materials. While experimenting during our trial-and-error stage, we tried using sharp particles that released outward from a center point. However, in the end, the quality of the animation wasn’t quite what we were looking for, so we chose to reference from hand-drawn materials. 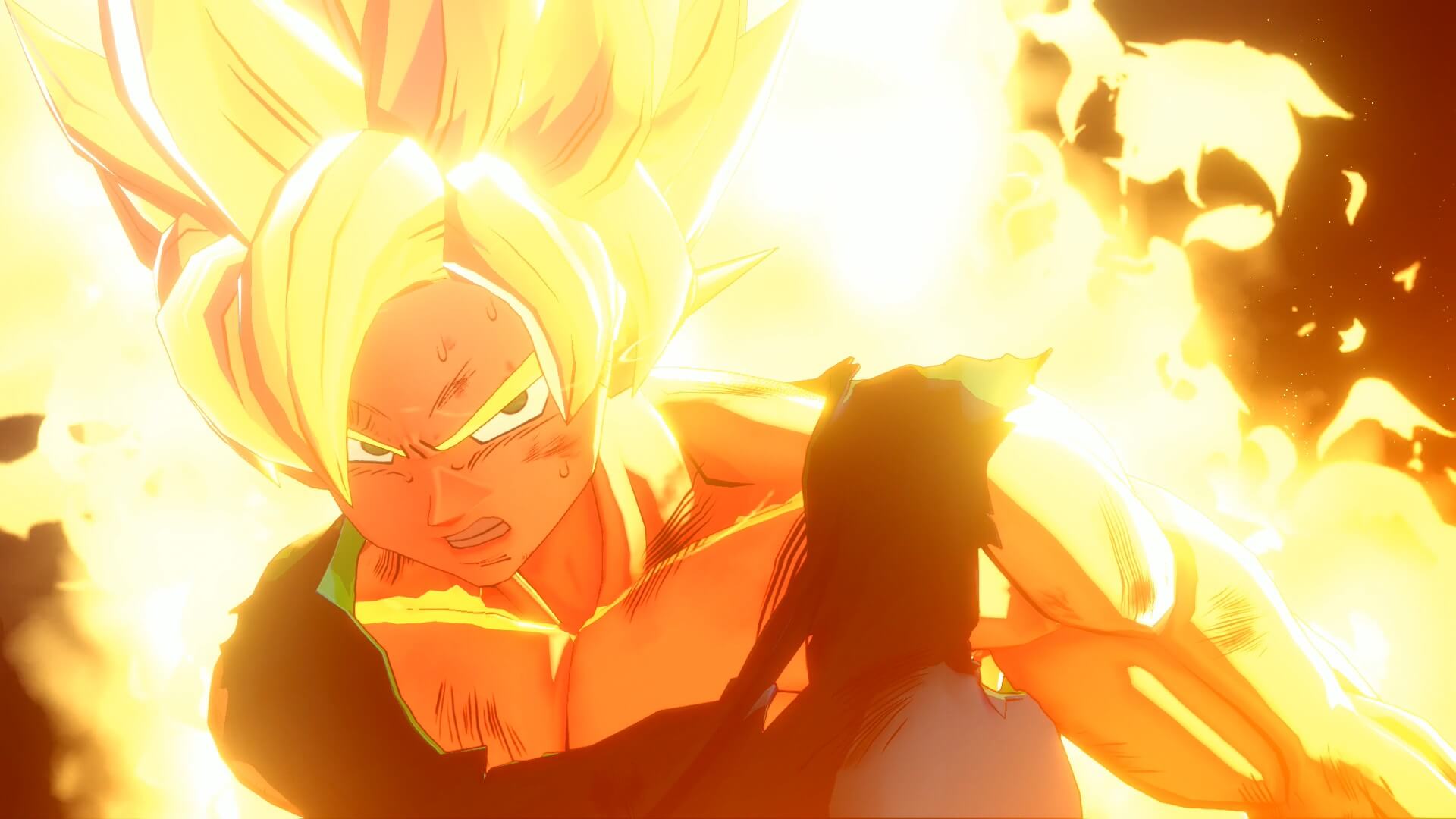 Kimoto: Everything was created with care; all the shadows and highlights appear like they do in the Dragon Ball world. If we were to implement the shadows with the 3D models as-is, we wouldn’t be able to capture the accurate image of the universe, so we made sure to make detailed adjustments to all of our designs. When designing each character, our team made sure to adjust the shadows, highlights, and colors accordingly, so that it looks as close to the anime as possible. Other than that, we fiddled and applied post effects such as contrast, paraffin, and gradation filters to improve our visuals.

There are iconic moments in the game that look like they are lifted straight out of the anime, with some fans writing that the game looks better than its source material at times. How did CyberConnect2 approach recreating these scenes?

Kimoto: Dragon Ball is loved by fans worldwide and across many generations, so when we recreated these famous scenes that have left long-lasting impressions on fans, we made sure to pay attention to the smallest details. From character expressions to various Dragon Ball scenes, we carefully recreated them in-game while referencing the anime and manga. By incorporating one of CC2’s strengths of adopting complex anime expressions into the game, we believe we’ve made a compelling experience for both fans of the story and for those who might be jumping into the world of Dragon Ball for the first time. 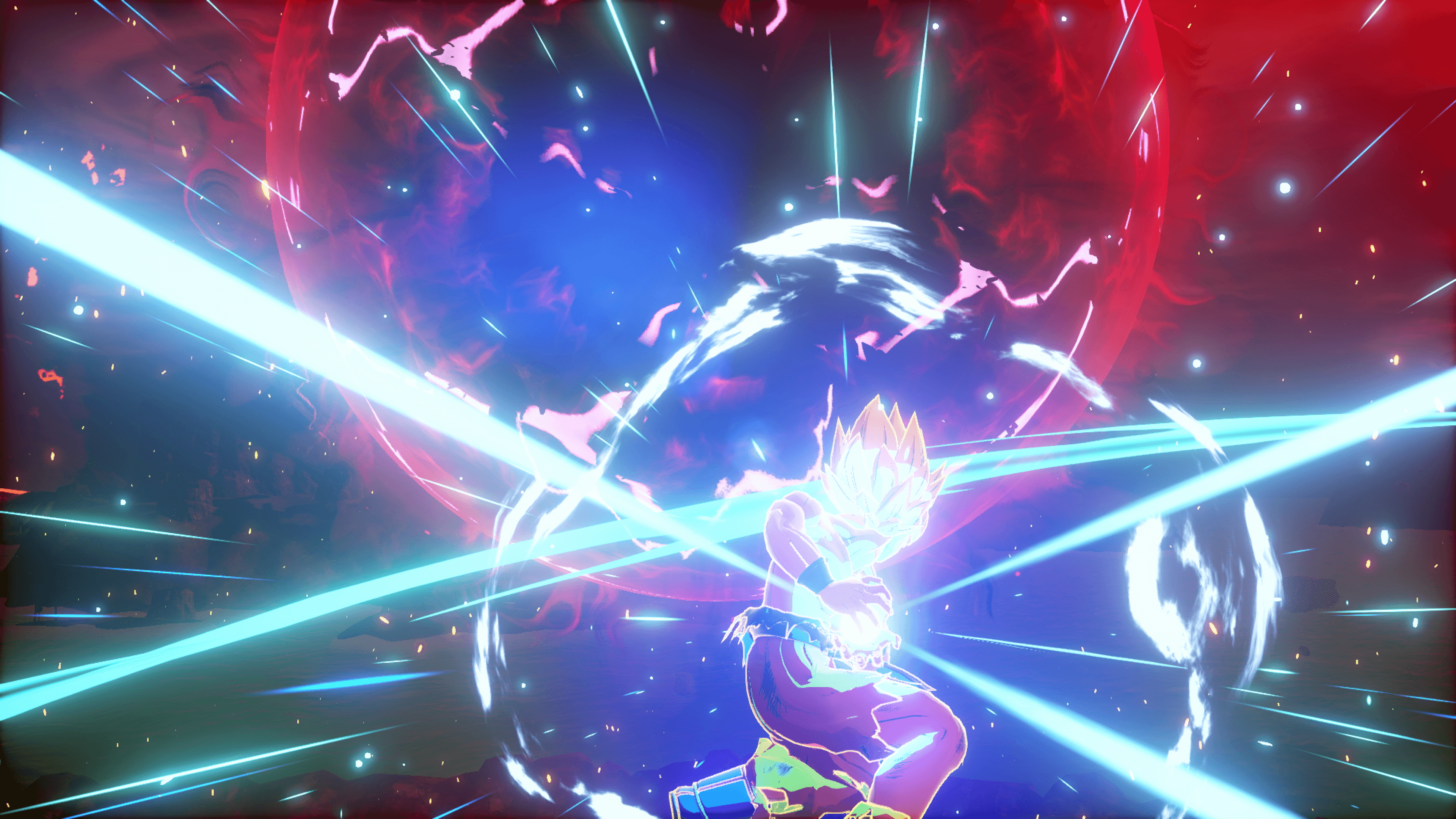 Considering this is CyberConnect2’s first Unreal Engine 4 game, what did the art team think of the transition to the engine?

Kimoto: Our team has had past experience using Unreal Engine 3 while developing Asura’s Wrath, but Dragon Ball Z: Kakarot is the first time our team delved into UE4. With this newer version of Unreal, a lot of features have been greatly improved. This allowed the title’s development process to become much more streamlined and straightforward. Our team hopes to use the engine again in the future.

Can you describe what the team’s artistic workflow was like?

Kimoto: There haven’t been any big changes in terms of our artist’s workflow up until now. First, we receive info from our lead director regarding the art direction and content that needs to be implemented into the game. The art team then identifies what needs to be done for each section and identifies requirements to complete each task. The final process of the art team’s workflow is getting the green-light from the lead director before moving on. 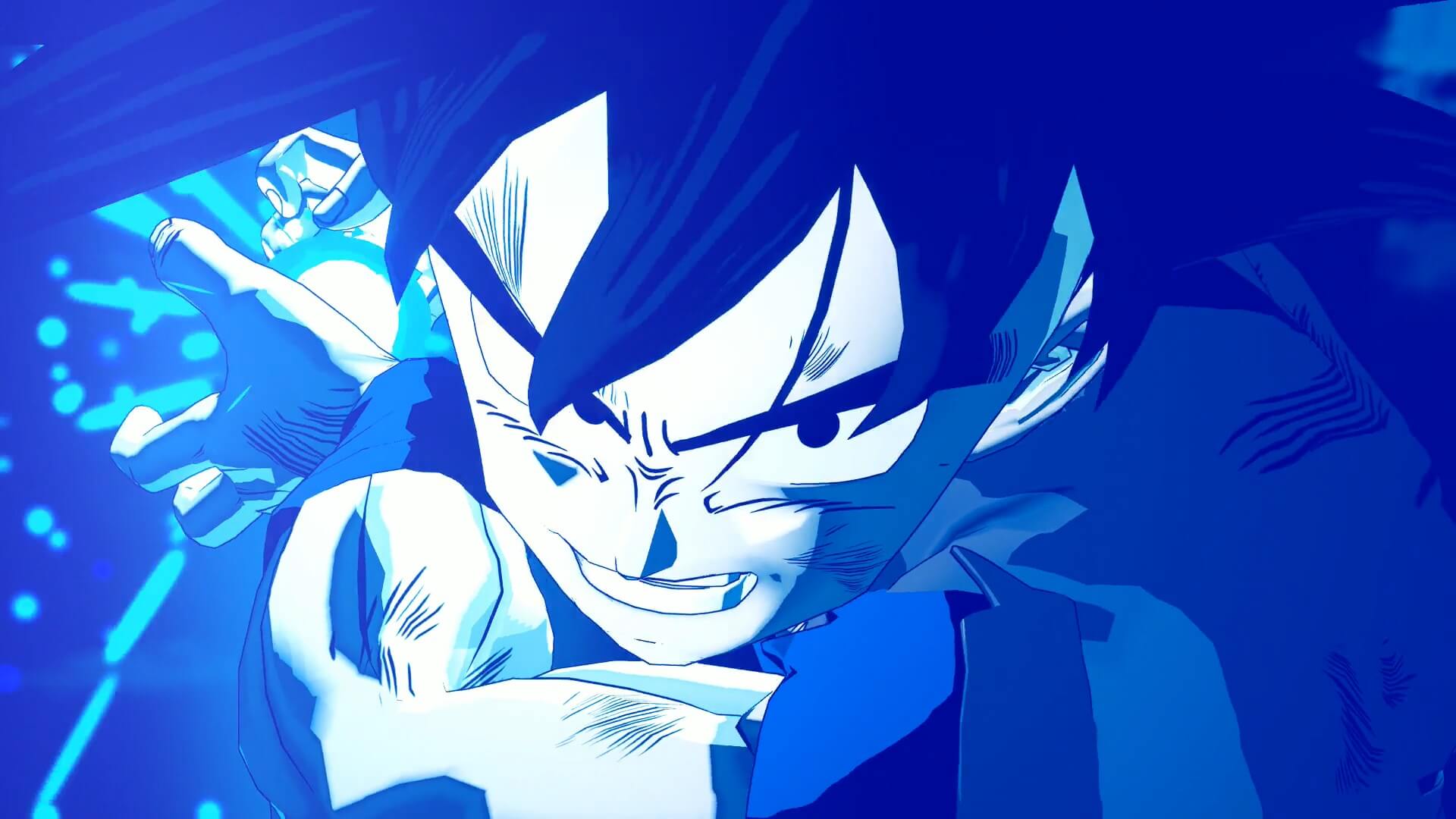 Did the team have any favorite artistic Unreal Engine tools or features that they found particularly helpful?

Kimoto: Our team frequently uses Blueprints to create events that occur in the in-game story. It’s very powerful, as we were able to freely put together scripted events without the need for programmers. Our team also used Sequencer for all the landscapes and foliage in the background of all of our cinematics.

With a semi-open world coupled with numerous characters flying across the screen, was it challenging getting performance in check?

Kimoto: Reducing memory usage and keeping load time to a minimum was one of the main challenges our team faced. The overall file size that was required to read at one time was quite large and tended to put a lot of strain on memory. This was largely due to our large scale backgrounds. To tackle this issue, we had to work on optimizing all the files and simplifying the overall file orders. Addressing these memory issues was a challenge, and we tried to mitigate it by constantly keeping an eye on the asset update history. 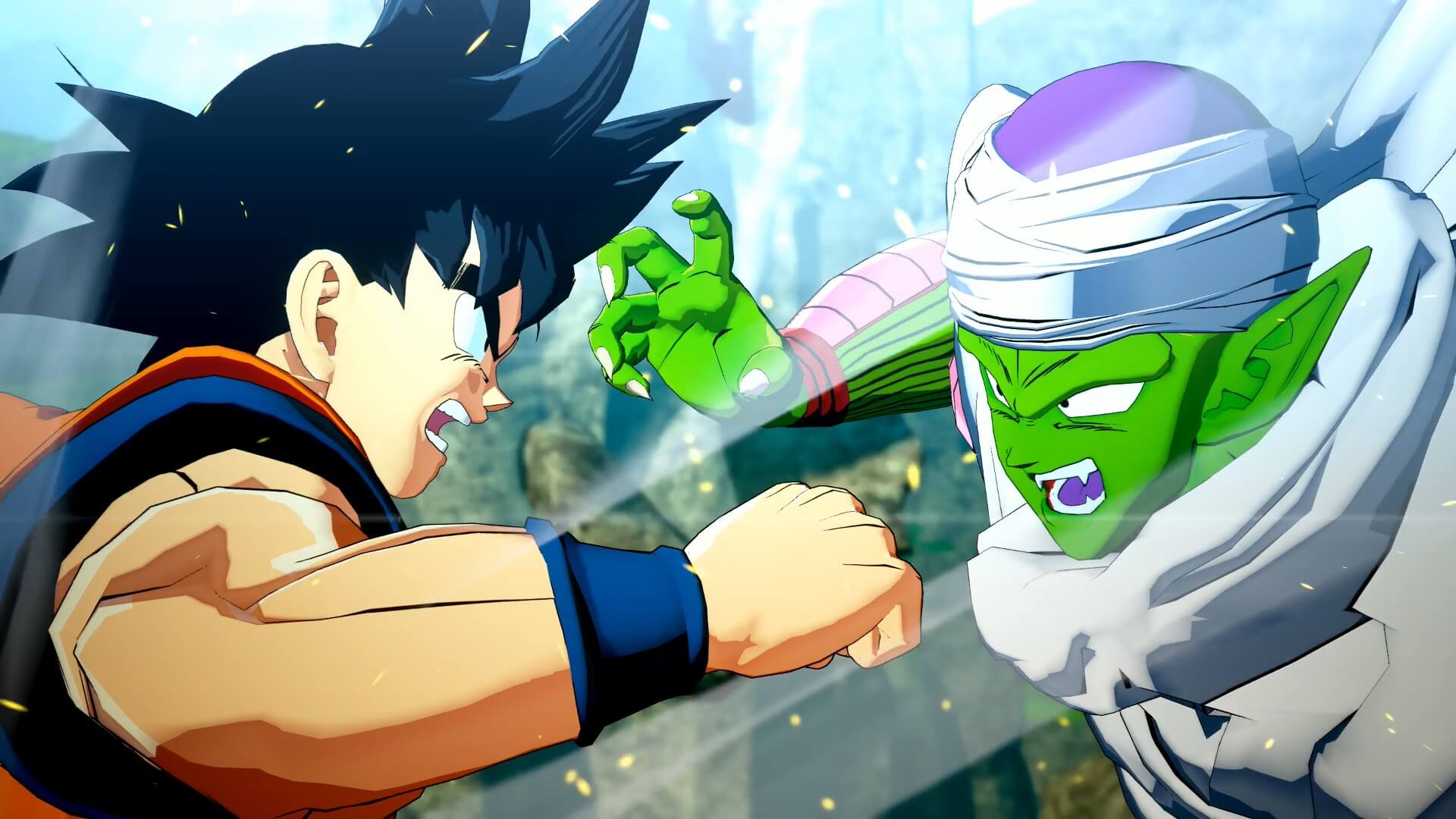 With this being the company’s first Dragon Ball game, what was it like recreating Akira Toriyama’s iconic characters and universe in 3D?

Kimoto: Goku is a character who can fly around freely. He has superhuman powers that allow him to do almost anything, so one of our biggest challenges was making him feel intuitive to control. Aside from this, there were many challenges for our team, but by combining the teamwork of each and every staff member, we were able to create a world where we can experience what it’s like to become Goku. I hope everyone will be able to enjoy flying around, fighting, and exploring the vast world we’ve created.