Vehicles, heavy equipment, logistics machines, deep-sea robots, and even planetary rovers are all mechatronics systems—integrated mechanical and electronic equipment, typically mobile, that interacts with its environment and workspaces in complex ways. Because this type of machinery is expensive to build, often deployed in hazardous situations, and potentially dangerous to use, it’s paramount that its design is fully optimized for safety and that operators have comprehensive training. One way to reduce costs and the time it takes to design machines and train operators to use them is through ultra-realistic real-time simulations.

Developing some of the most trusted land and sea simulators in the industry, CM Labs Simulations provides capabilities for training, mission rehearsal, serious games, virtual prototyping, and product testing.

Providing both pre-built simulators and simulation software for custom solutions

Over the past two decades, CM Labs has built a name for itself in the simulation industry by creating highly accurate, ready-to-go interactive simulators for engineering and operator training purposes. As such, CM Labs has provided over 1,000 simulators to customers in over 30 countries.

However, what may not be immediately obvious is that all of CM Labs’ simulators are built on a common, powerful platform, Vortex Studio. This advanced suite of real-time simulation and visualization software is used by the CM Labs team and customers alike to create and deploy simulators of their own. 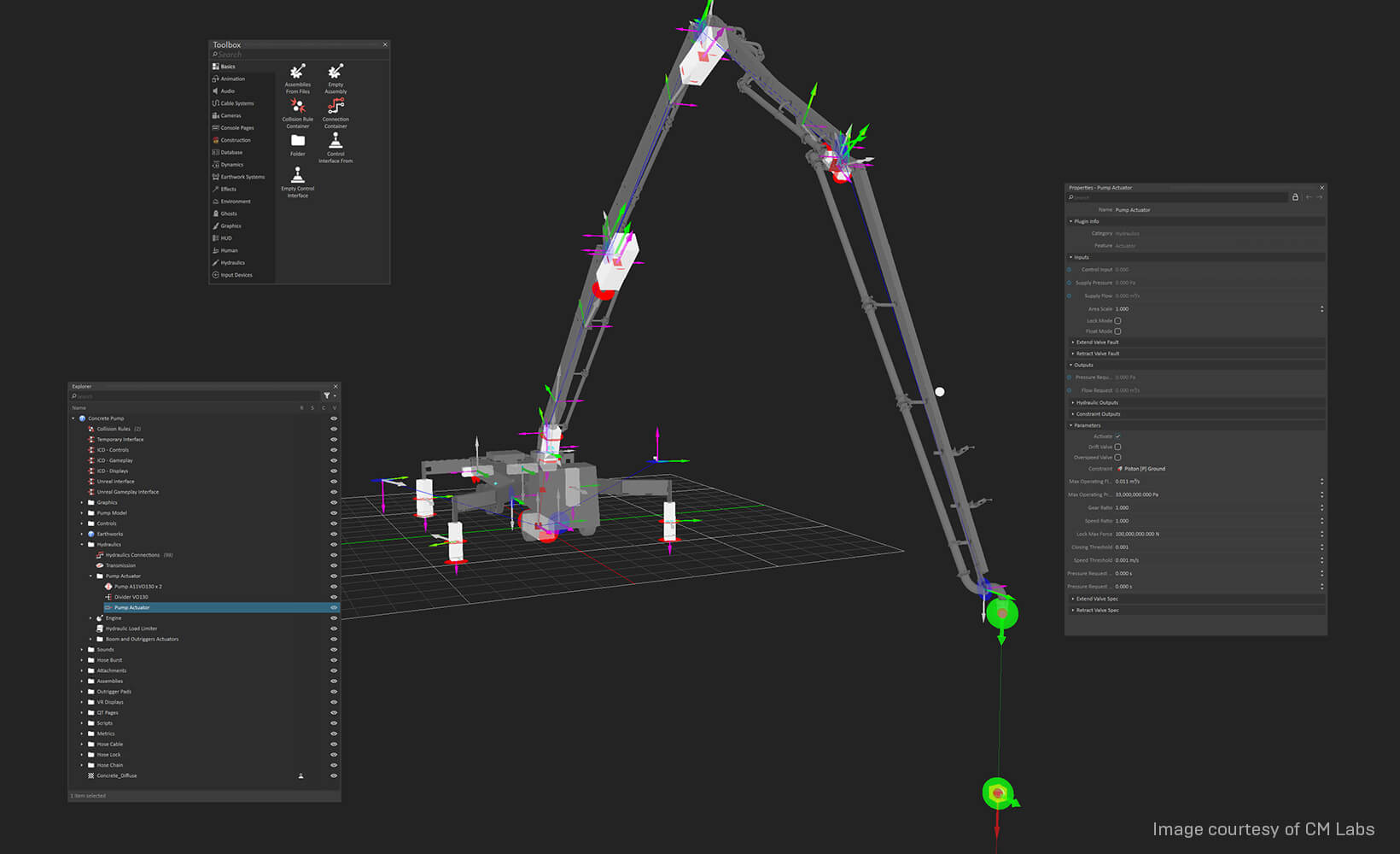 Off-highway engineers use simulations built in Vortex Studio to visualize heavy equipment in real time. Marine engineers have developed simulators that solve the challenges of designing and testing equipment for offshore and subsea operations. Robotics engineers test and refine real-time simulation of grasping, access, and other task-based robotic applications. The software is also widely used in the defense industry for high-fidelity training for vehicle, heavy equipment, and maritime operations.

“Vortex Studio is powered by a validated multi-body dynamics engine. It simulates machines in real time and at a very high fidelity,” says Arnold Free, Chief Innovation Officer and Co-Founder of CM Labs. “In training situations, you can build real skills, because the training simulator is based on a very realistic representation of how that real machine performs. Those skills are then transferable to the physical equipment.”

The simulators that CM Labs produces achieve such a high fidelity because they simulate the fundamental physics of the machine and its environment, accurately predicting its behavior. This produces a much more realistic representation of how the machine will act in real life.

“We model the machine in engineering terms. For example, with a vehicle like a truck, we know the engine has a torque curve and a powertrain, and there are wheels, which have particular properties and contact with the terrain,” says Free. “Or if it’s a crane, it has winches and cables and each cable has specific engineering properties. The simulation is constructed based on those properties, and any behavior in the simulation emerges based on the model built, just like the real machine. So there’s nothing pre-scripted—it’s emergent behavior based on the engineering model.” 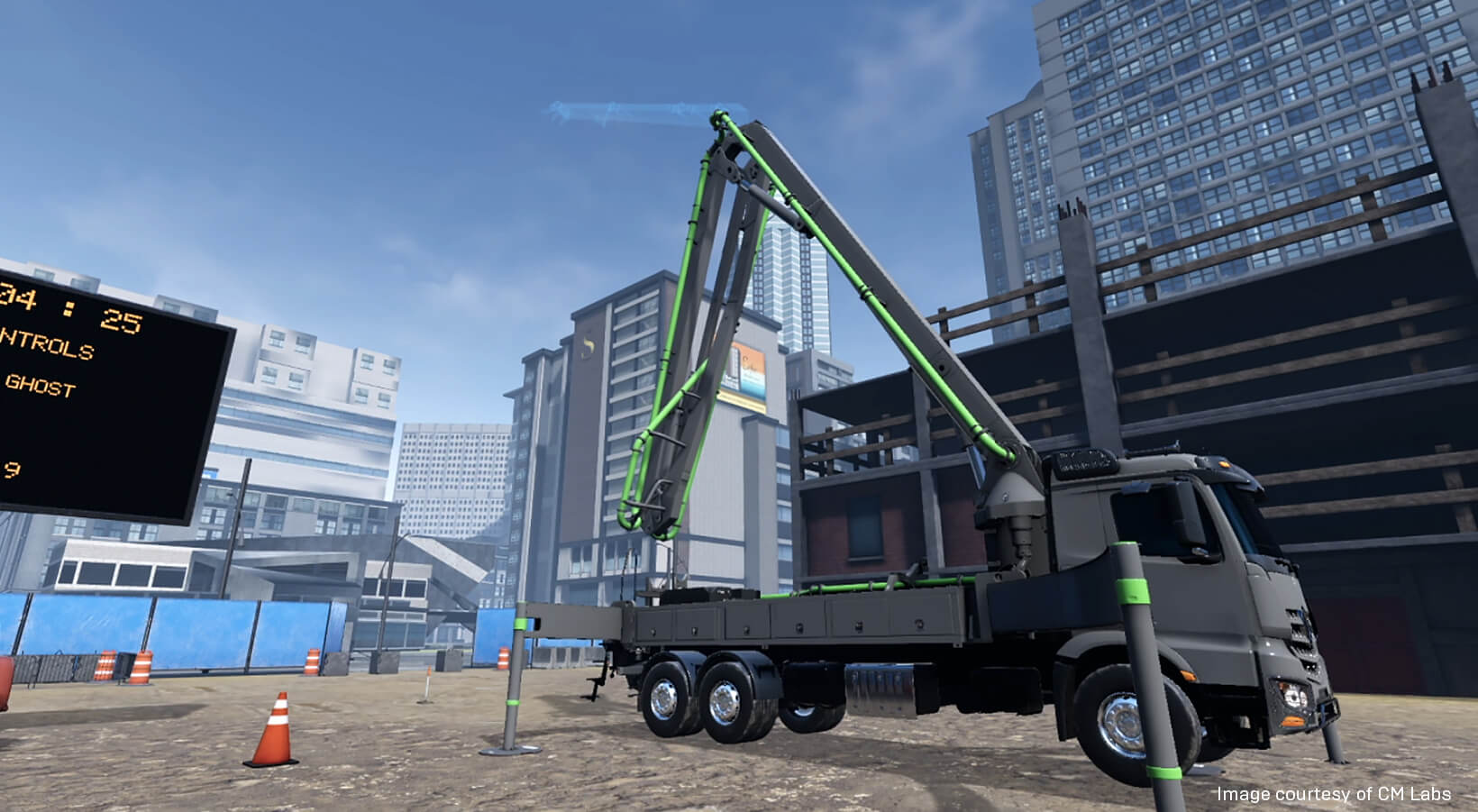 The growing demand for VR-based engineering and training

The mechatronic models for CM Labs’ simulators are created in Vortex Studio’s integrated editor application. This editor is used to create and test the models of the vehicles, robotics, or heavy equipment to be simulated. The software comes with a built-in visualization engine, but this engine is focused on specific applications and therefore lacks some features that could be useful for both customers and for the development of the team’s own simulators—including for specific VR devices.

“We’re seeing more and more interest in the industry for VR-based engineering and training solutions,” says Free. “It’s faster to build an immersive environment around a VR headset than using lots of monitors. 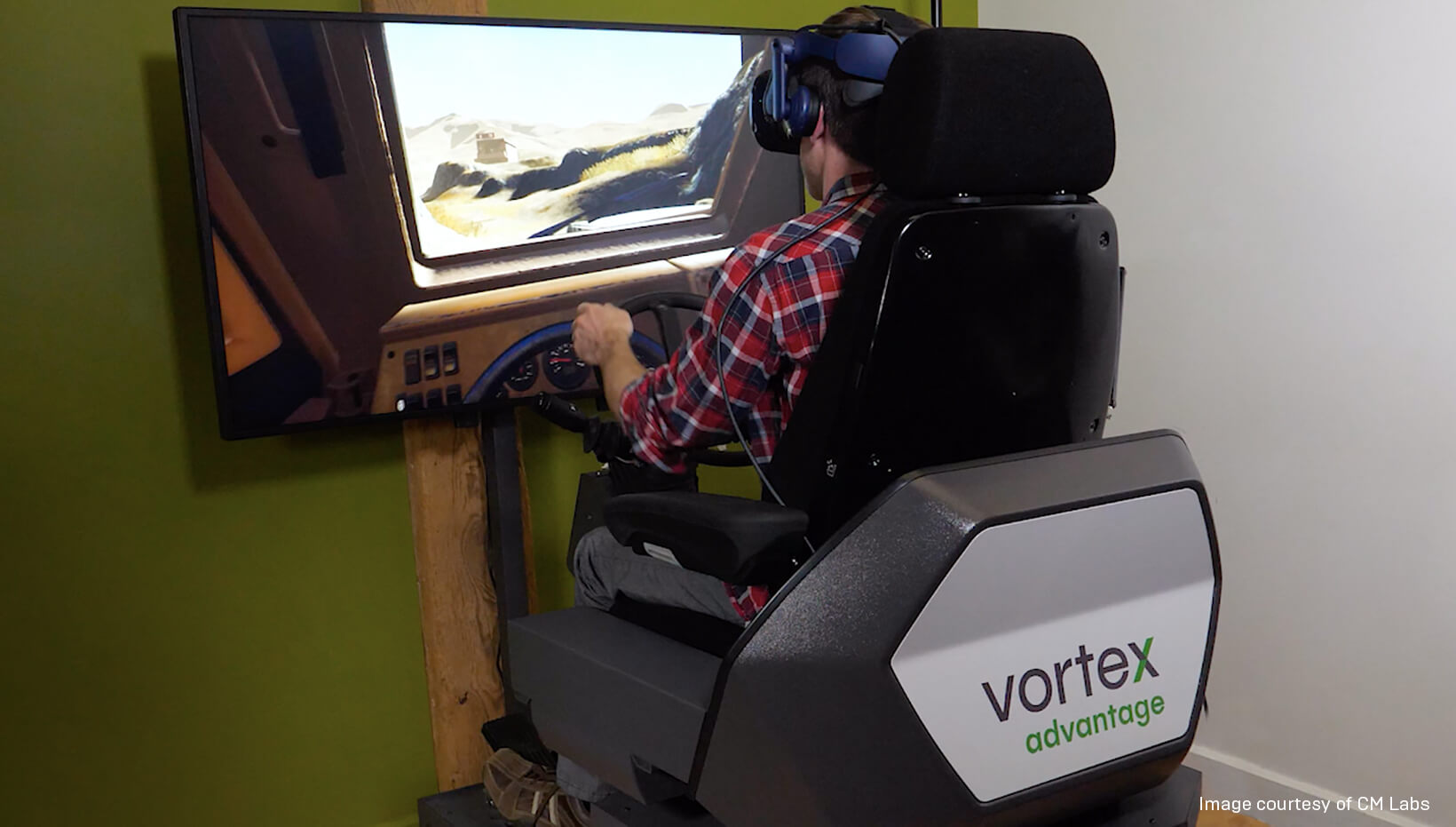 “We wanted to build a VR-based training solution with rich visuals, and the fastest and easiest way we thought to do that was with Unreal Engine,” he continues.

To achieve this, the team at CM Labs developed a plugin that connects the powerful high-fidelity data coming from Vortex Studio to Unreal Engine using Blueprint as a gateway. From here, all the gameplay, graphics, and VR capabilities of Unreal Engine could be tied to Vortex Studio’s mechanical engineering workflow.

By linking the technologies, CM Labs provides a solution that leverages the strengths of each. “We didn’t want to completely replace our engineering-driven workflow, but we wanted to access this great workflow in Unreal—we wanted to bring together the best of those two worlds,” says Free.

The well-established workflow in Vortex Studio enables mechanical engineers to build high-fidelity simulations of machines. Vortex Studio also provides essential pieces to integrate other simulation engines, hardware-in-the-loop, as well as a networking framework to connect hardware, software, consoles, and databases. Combined with the gameplay and visualization workflows in Unreal Engine, CM Labs can provide best-of-class tools to develop simulation solutions and implement them in VR or with conventional displays. 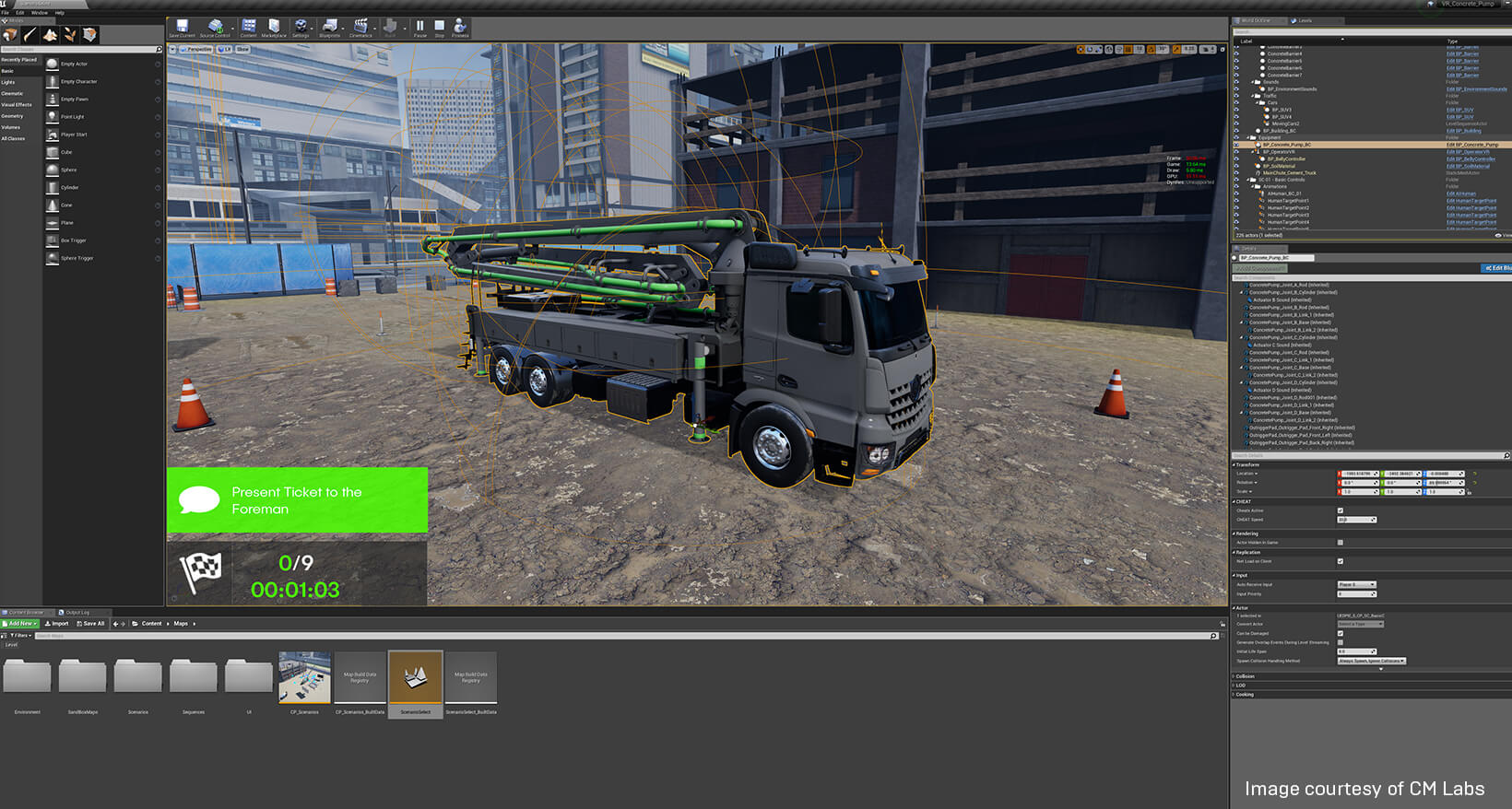 This ability to connect together the leading tools on the market addresses one of the top priorities for CM Labs’ customers. “If you look at either the engineering market or the training market, what our users want to do is bring together the best-of-class tools needed to build a best-in-class solution,” says Free. “Vortex Studio makes it very easy to connect the pieces.”

Those pieces range from 1D tools like MathWorks Simulink to simulate a control system, to physical controls like OEM joysticks, and networking protocols like UDP. “That’s really where we see Vortex Studio adding a lot of value, by making it easy to plug all these pieces together and build simulations on the desktop or deploy a physical simulator,” says Free.

The fidelity and realism achievable in Vortex Studio has caught the attention of some high-profile organizations. CM Labs has been collaborating on a NATO program called the Next Generation NATO Reference Mobility Model (NG-NRMM), the objective of which is to find the next generation of simulation tools to be used for mobility assessments of military vehicles across vastly different terrain types. 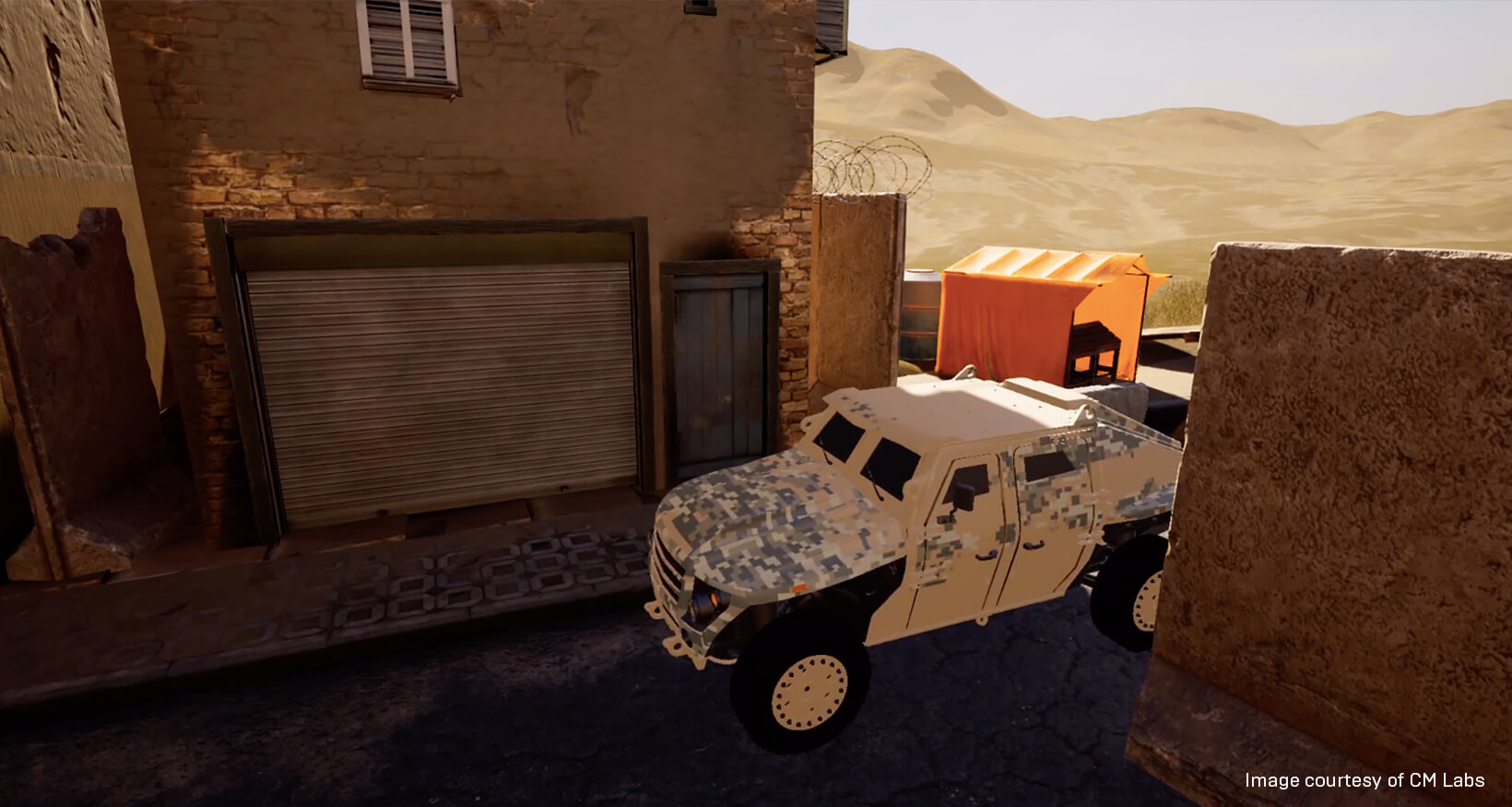 “This is an essential program. If a vehicle can’t maneuver, then missions are jeopardized, and lives can be lost,” recalls Free. “NATO actually instrumented the vehicle, drove it through standardized tests, collected that data, and then used that to compare it to a simulation of the vehicle.”

Tools from around half a dozen vendors were tested to find out how useful they were for assessing a vehicle’s performance and mobility, including Vortex Studio. “All the other tools took hours to compute a minute or two of simulation data, whereas we were simulating everything in real time, and we’re proud to say, we still came either first or second in terms of matching NATO test data,” says Free. “That’s our strength—interactive real-time—which is why there’s a logical connection with visual engines such as Unreal to create immersive simulations.” 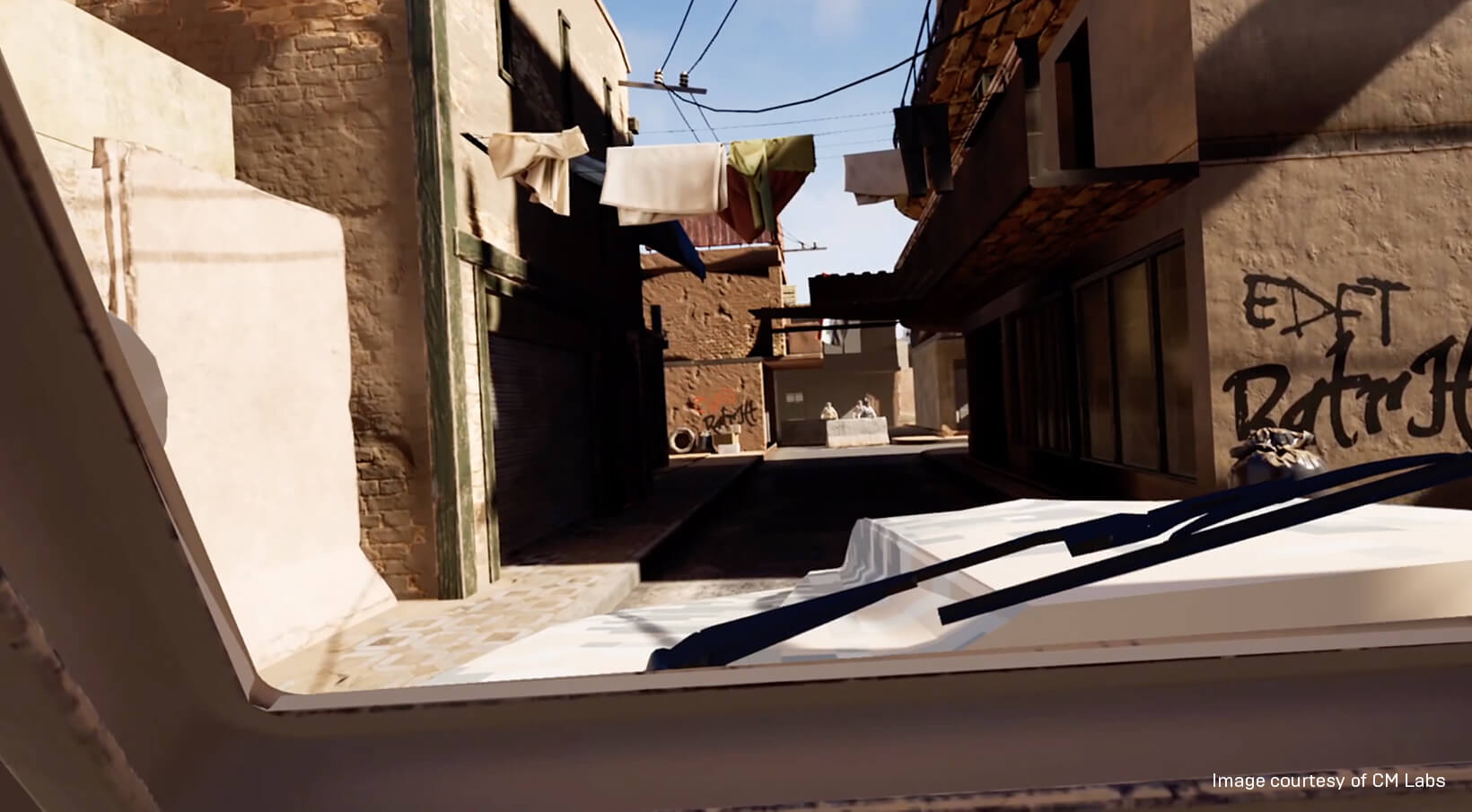 “It’s a good example of how to integrate Vortex Studio into another engine,” says Free. “By providing the plugin as an open source download, it could be also extended if someone has software engineering skills.”

Interested parties can register to be notified when the source code and plugin are available to download. The Vortex Studio for Unreal Engine integration requires both the plugin and an active Vortex Studio license (2019c or greater).

Are you interested in finding out what Unreal Engine can bring to simulation training in your industry? Contact us and we’ll get that conversation started.