Huawei is the second biggest smartphone manufacturer in the world after Samsung, and it's got there by offering up some excellent devices along the way.

It's grown in strength significantly over the past couple of years, to the point that if you're looking for the best Huawei phones around, there's a wide range to choose from.

At the top of the range are the flagship Huawei P20 Pro and Huawei Mate 20 Pro, but our best Huawei phones list also includes great, affordable handsets such as the Huawei P Smart.

However, not everyone’s budget and needs are the same, so just because something is lower in this list it doesn’t mean it will be a worse choice for you than something higher.

Ultimately you shouldn’t go wrong with any of these phones, and our list will show you at a glance their specs, highlights and main weaknesses, so you can make an informed choice as to which is the best Huawei for you. 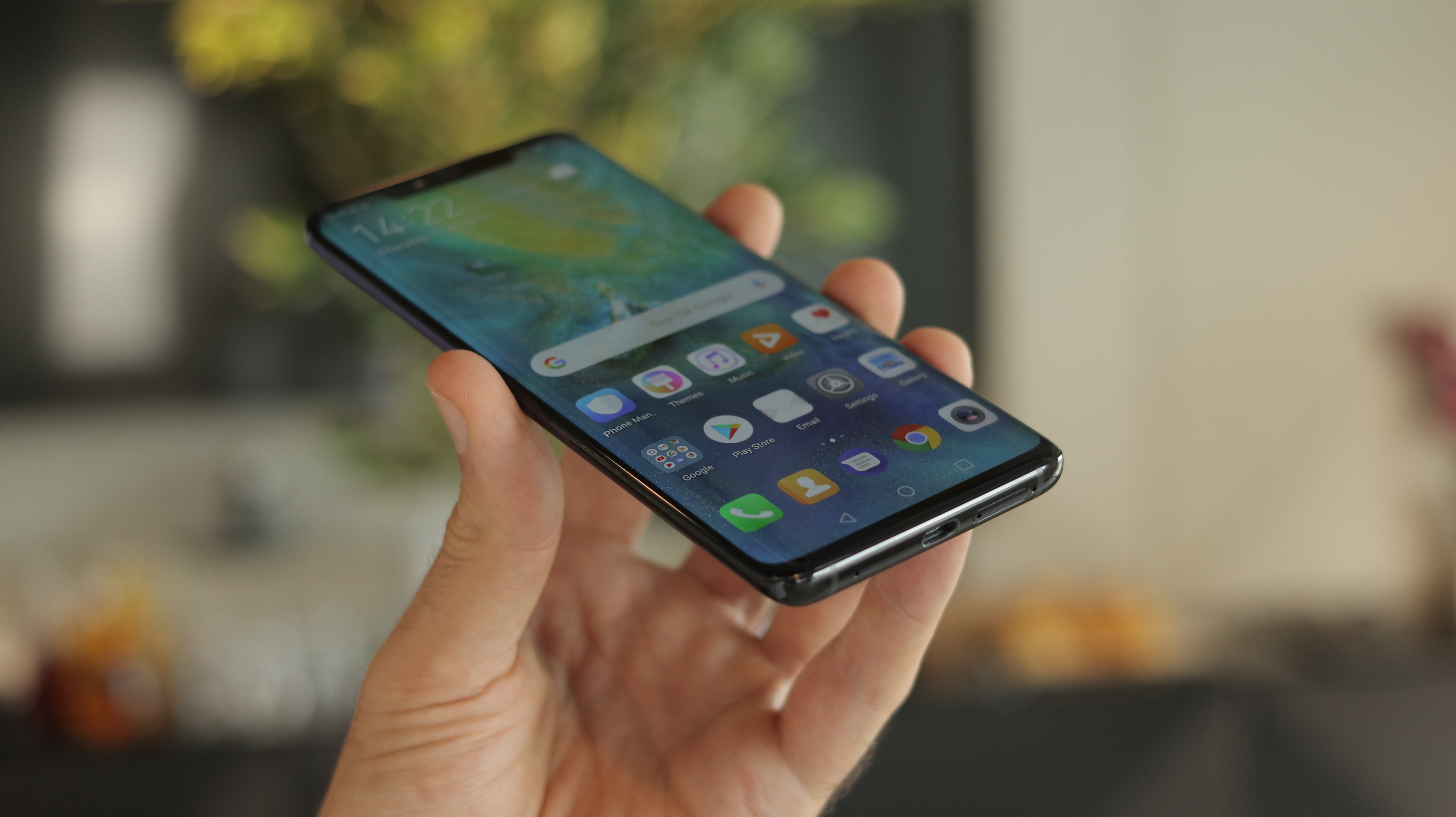 The Huawei Mate 20 Pro is the best Huawei phone you can buy right now, offering up a heady mix of design, power and performance with a few party pieces thrown in too.

It builds on the excellent P20 and P20 Pro, offering up even more screen, enhanced triple rear cameras and an in-display fingerprint scanner.

The Mate 20 Pro packs a huge 6.39-inch display giving you a huge amount of space for gaming and movies, and its QHD resolution and HDR10 support ensures everything looks great. There is a wide notch at the top of the display though.

It also boasts three cameras on the rear, nabbing the excellent 40MP wide-angle and 8MP telephoto lenses from the P20 Pro – but the third sensor is new. It's an ultra-wide 16MP snapper allowing you to cram even more of your surroundings into each shot. 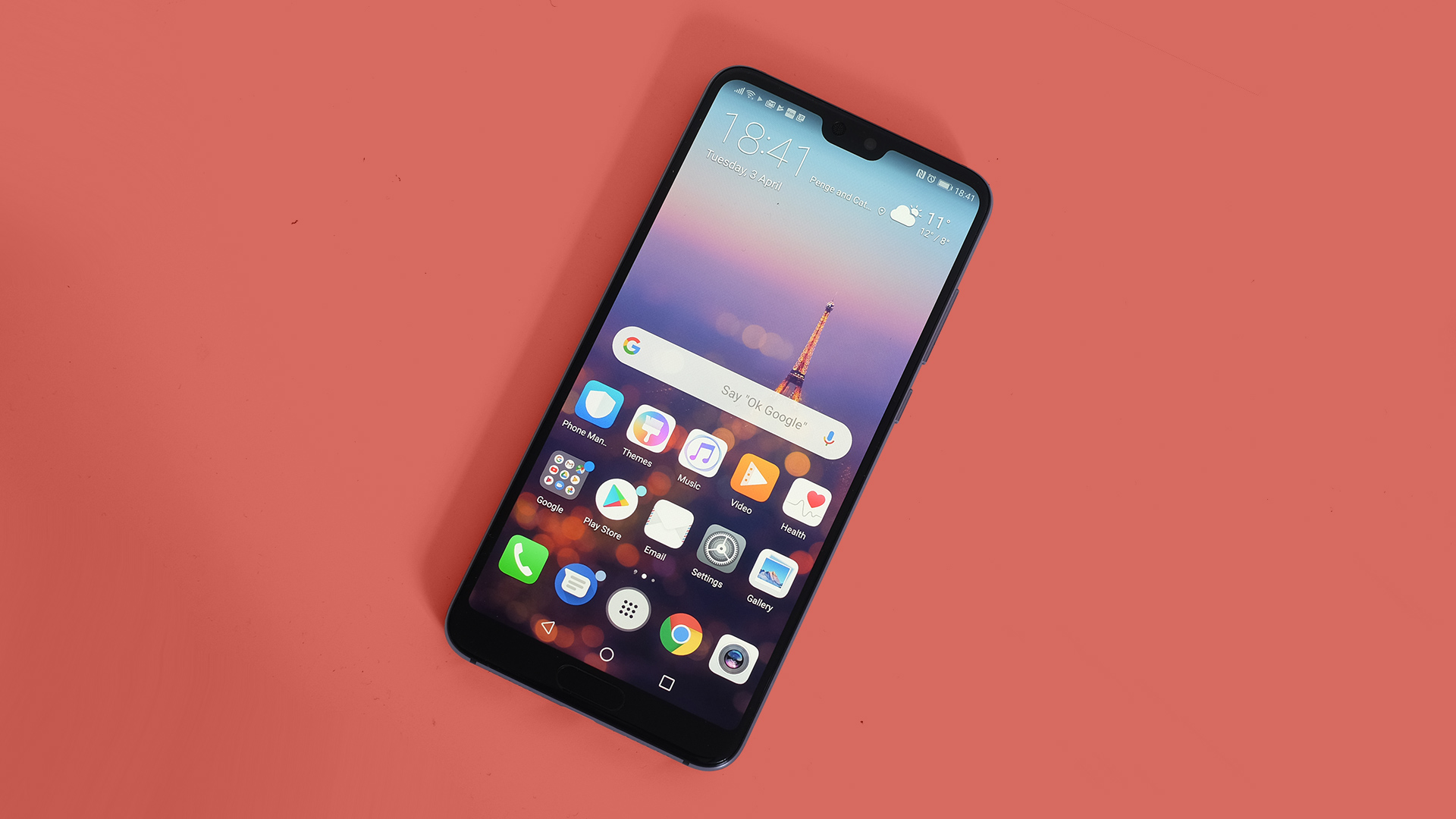 The Huawei P20 Pro may not be Huawei's latest flagship any more, but it still has a lot going for it, with the highlight being its exceedingly impressive and versatile triple-lens rear camera.

That camera allows for 3x optical zoom and proves surprisingly adept at night shots, which is usually a setting that phone cameras really struggle with.

Other highlights of the Huawei P20 Pro include a big, long-lasting battery, and an even bigger AMOLED screen that delivers vivid colors on a large scale.

The Huawei P20 Pro also has a striking design, with a metal frame and a glass back, that optionally comes in a gradient color scheme that sees the colors shift from purple at the top to a turquoise shade at the bottom.

Like any good flagship the Huawei P20 Pro also has facial recognition, a fingerprint scanner and lots of RAM.

There’s no wireless charging and the chipset isn’t quite a match for some flagships, but it’s not far off, and as a complete package the Huawei P20 Pro can compete with any other handset, as its strong ranking in our best smartphones list attests.

While the Huawei Mate 10 Pro landed back in late 2017 it’s still a very strong handset.

And while there are now larger Huawei handsets, this is still a big phone, with a 6.0-inch 1080 x 2160 AMOLED screen giving you plenty of space to enjoy apps, games and video.

As with the P20 Pro, the Mate 10 Pro also has great battery life, thanks to the big 4,000mAh juice pack inside it. And the design, while lacking the flashy colors of Huawei’s newer flagship, still impresses, thanks to a glass back, a metal frame, minimal bezel around the screen and water resistance.

Elsewhere you get a powerful dual-lens camera, loud stereo speakers and exactly the same chipset as the Huawei P20 Pro, making this a surprisingly powerful phone for its age. 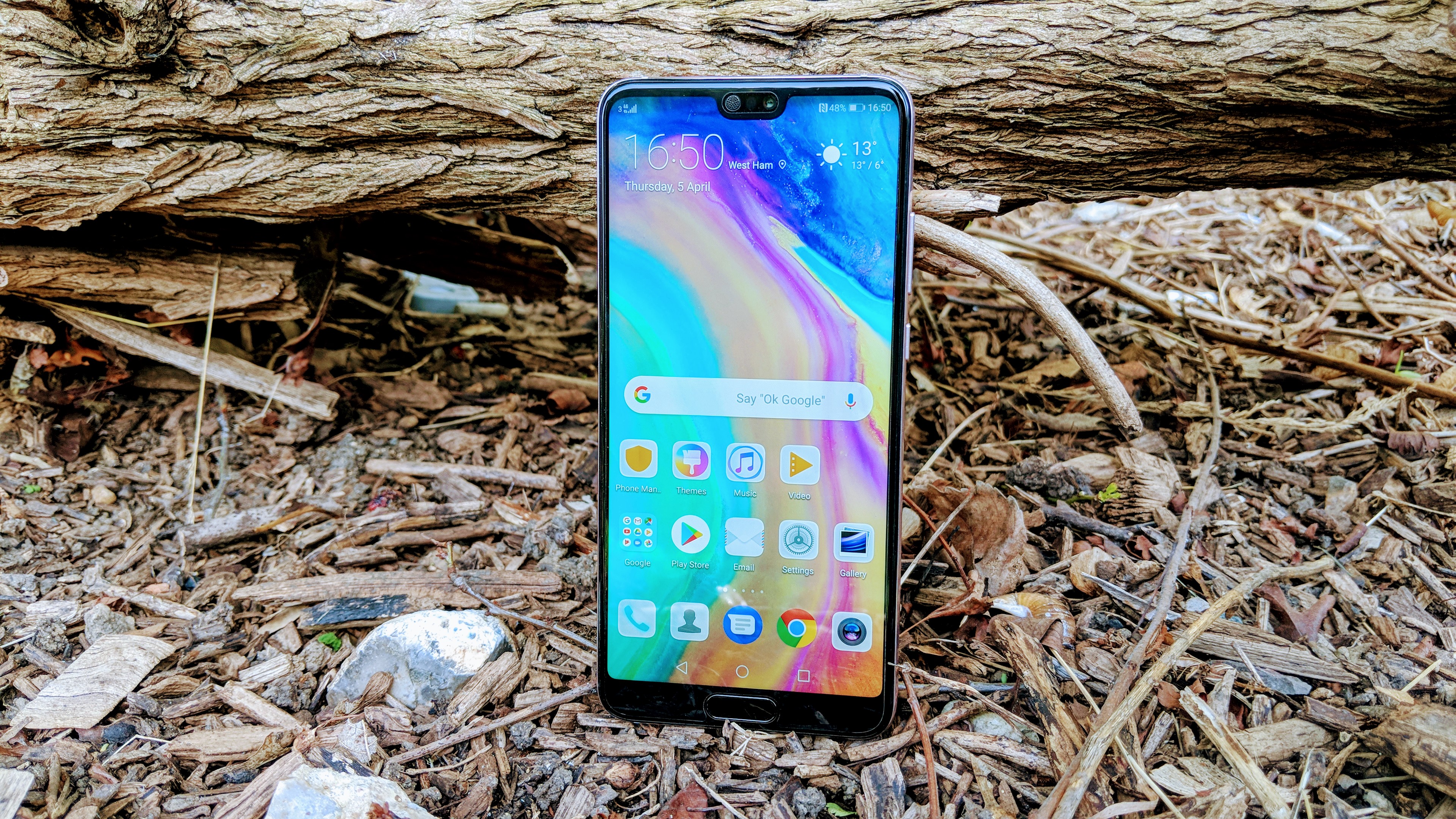 While no match for the P20 Pro, the standard Huawei P20 is still a very strong phone in its own right, and cheaper too.

It has much in common with its Pro companion, including a stylish metal and glass build, a Kirin 970 octa-core chipset, facial recognition and loads of storage.

Plenty more differs though, as with the Huawei P20 you get a dual rather than triple-lens camera, a 5.8-inch 1080 x 2240 LCD screen and a smaller 3,400mAh battery. Still, taken in isolation those are all still very solid specs.

In fact, while neither the camera nor battery is quite a match for the P20’s larger sibling, both are still strong enough for us to praise them in our review. So if you want something slightly smaller and slightly more affordable than Huawei’s headline handset, the P20 is a good option. 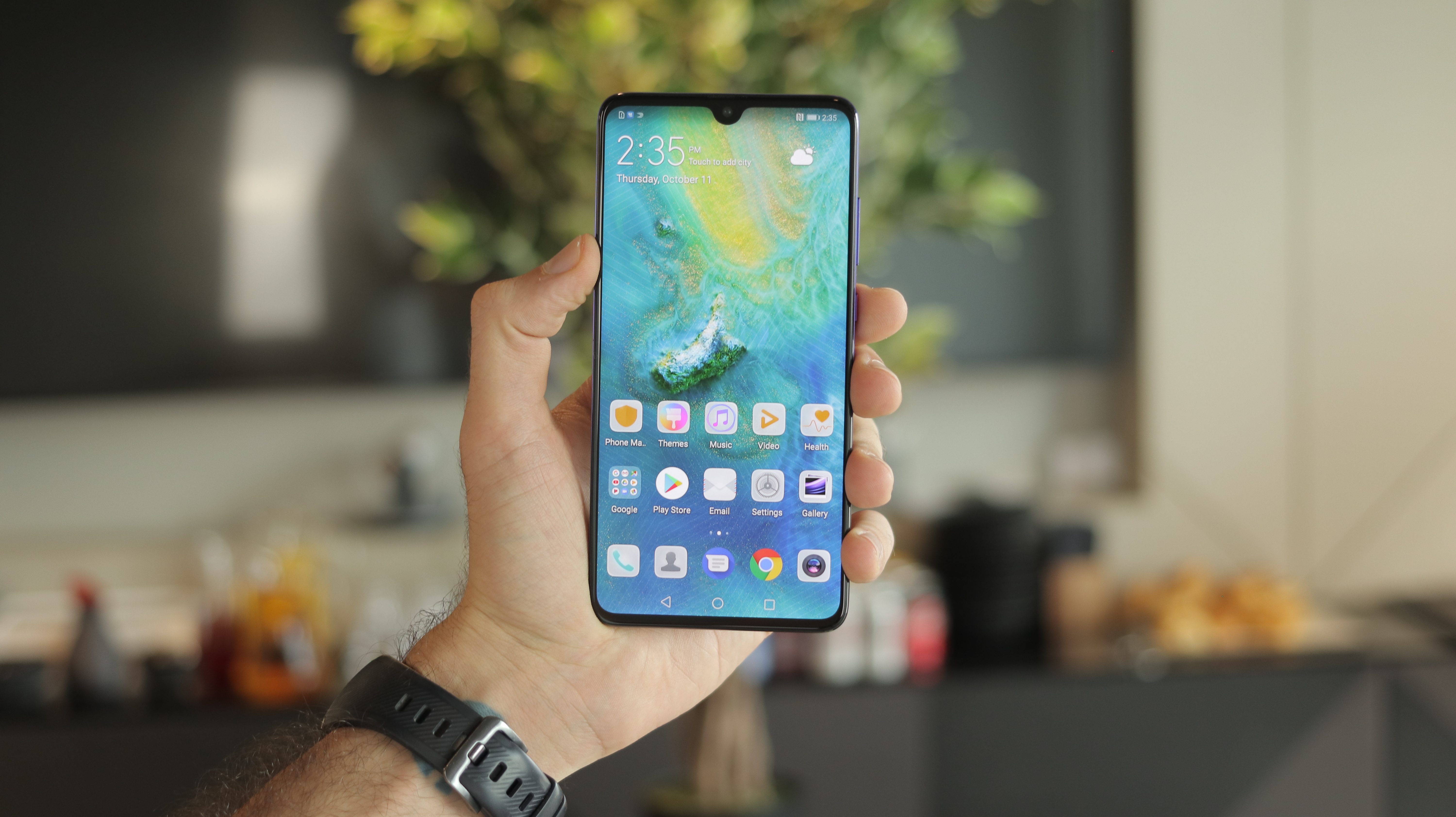 Other than the lower – though still high – price, highlights include a 4,000mAh battery which in our tests delivered excellent life, and top-end power, thanks to the use of an octa-core Kirin 980 chipset and up to 6GB of RAM.

The Huawei Mate 20 also has a triple-lens camera on the back. This isn’t the same selection of lenses as its Pro-level sibling, but still makes for a versatile setup.

And in some ways the Mate 20 actually has the Mate 20 Pro beat, as its 6.53-inch screen is larger, and it has a headphone port, which the fancier phone doesn’t. 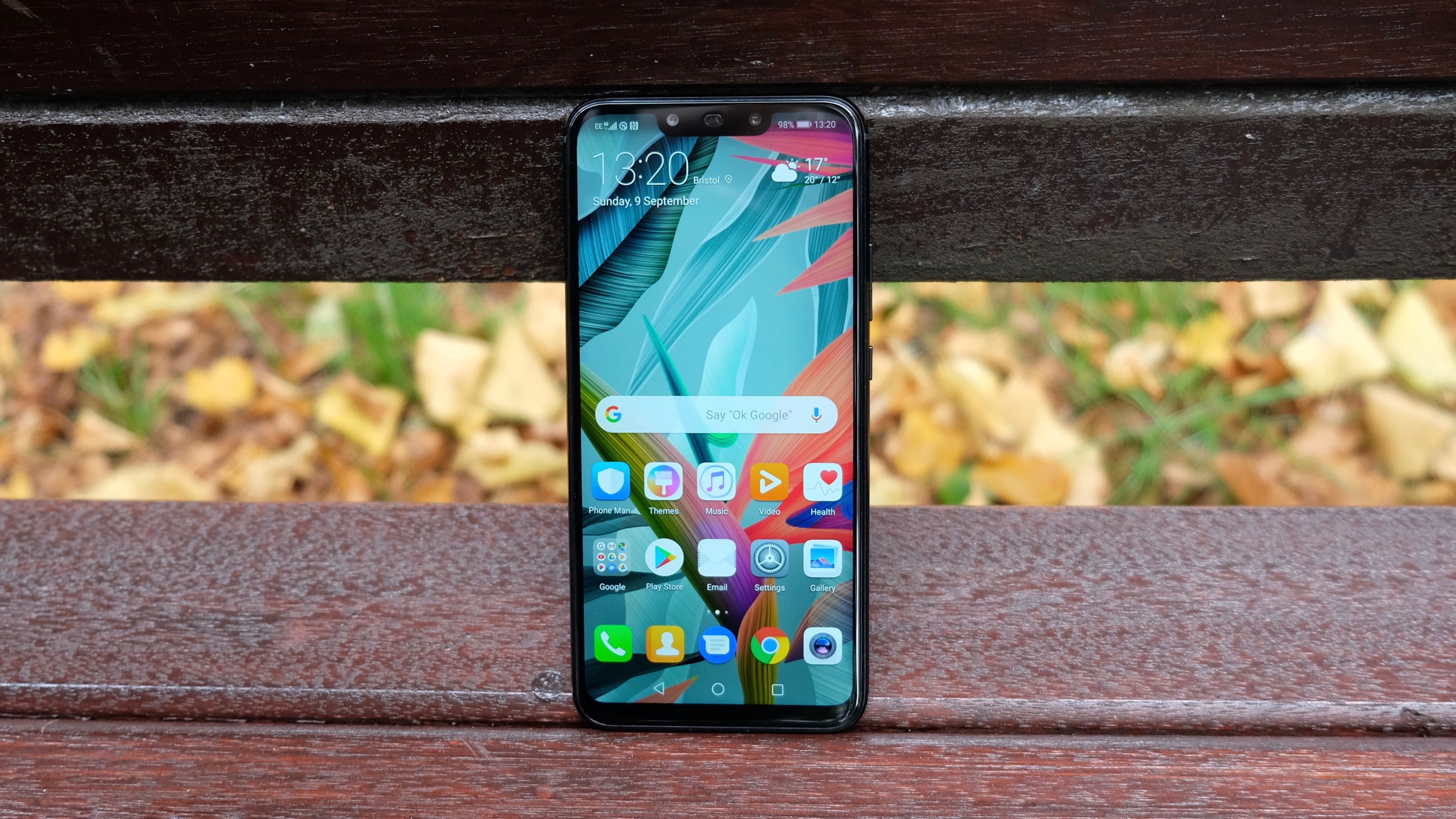 Another high point of the Huawei Mate 20 Lite is its camera, as it has a dual-lens one on both the front and back and uses AI to bring out the most in your snaps.

The Mate 20 Lite also has a big, 3,750mAh battery, though this only translates to average life, and as with the P20 Lite its chipset is a bit of a drawback, but if you want a Huawei phablet on a budget this is a strong option. 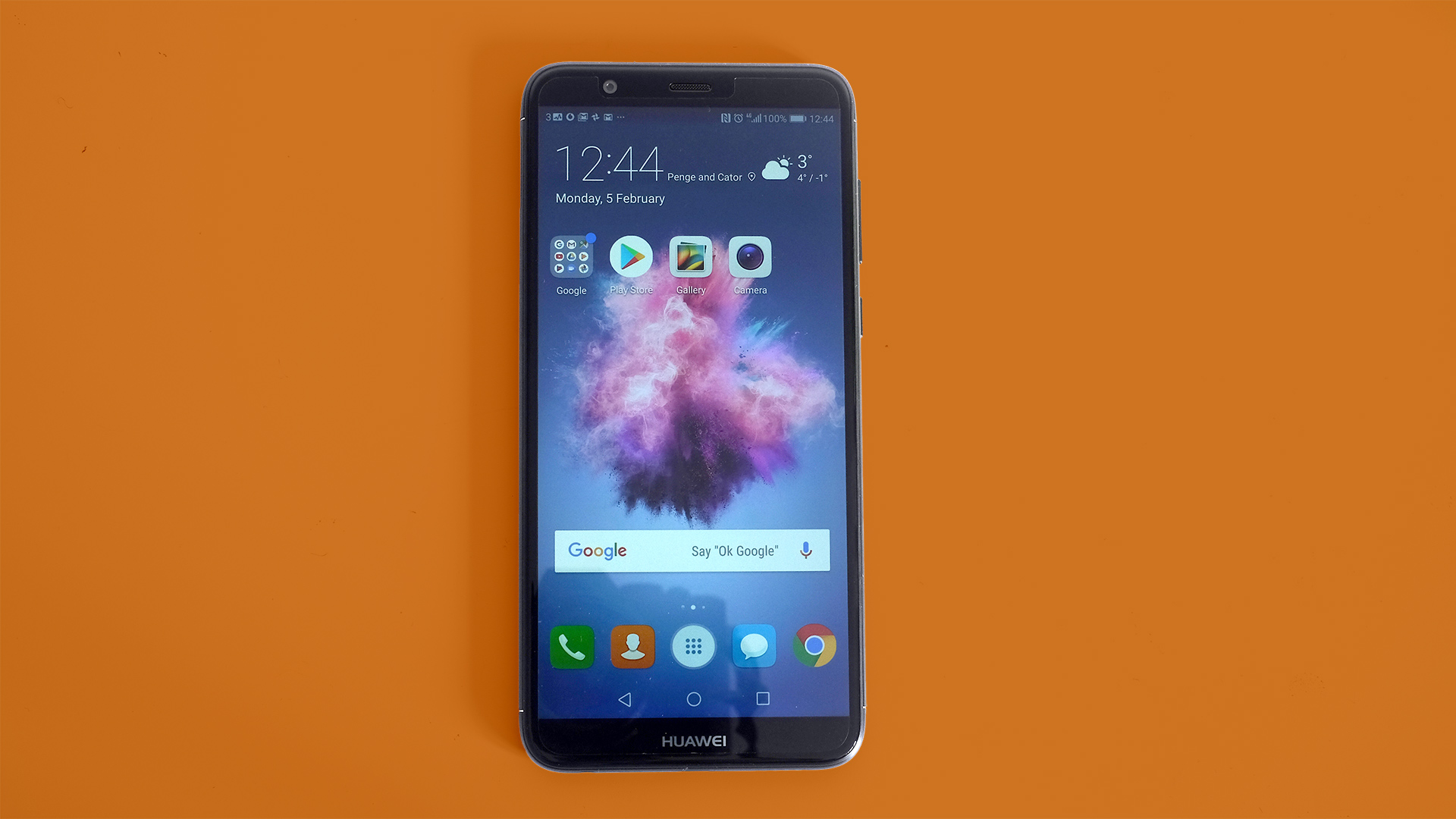 The Huawei P Smart is one of Huawei’s most affordable handsets, so its price is definitely a plus, but it wouldn’t be in this list if it was simply cheap.

For one thing, it has an attractive design, with an aluminum back that looks like something you’d expect to pay more for. It also has a fairly sizeable 5.65-inch screen with a trendy 18:9 aspect ratio and a 1080 x 2160 resolution, making it sharp too.

Plus, the Huawei P Smart has a dual-lens rear camera, and though the selfie camera only has a single lens, it and the rear snapper are both capable of background blur in shots.

Performance isn’t perfect, and you sacrifice some features such as fast charging, but overall the Huawei P Smart is a budget beast. 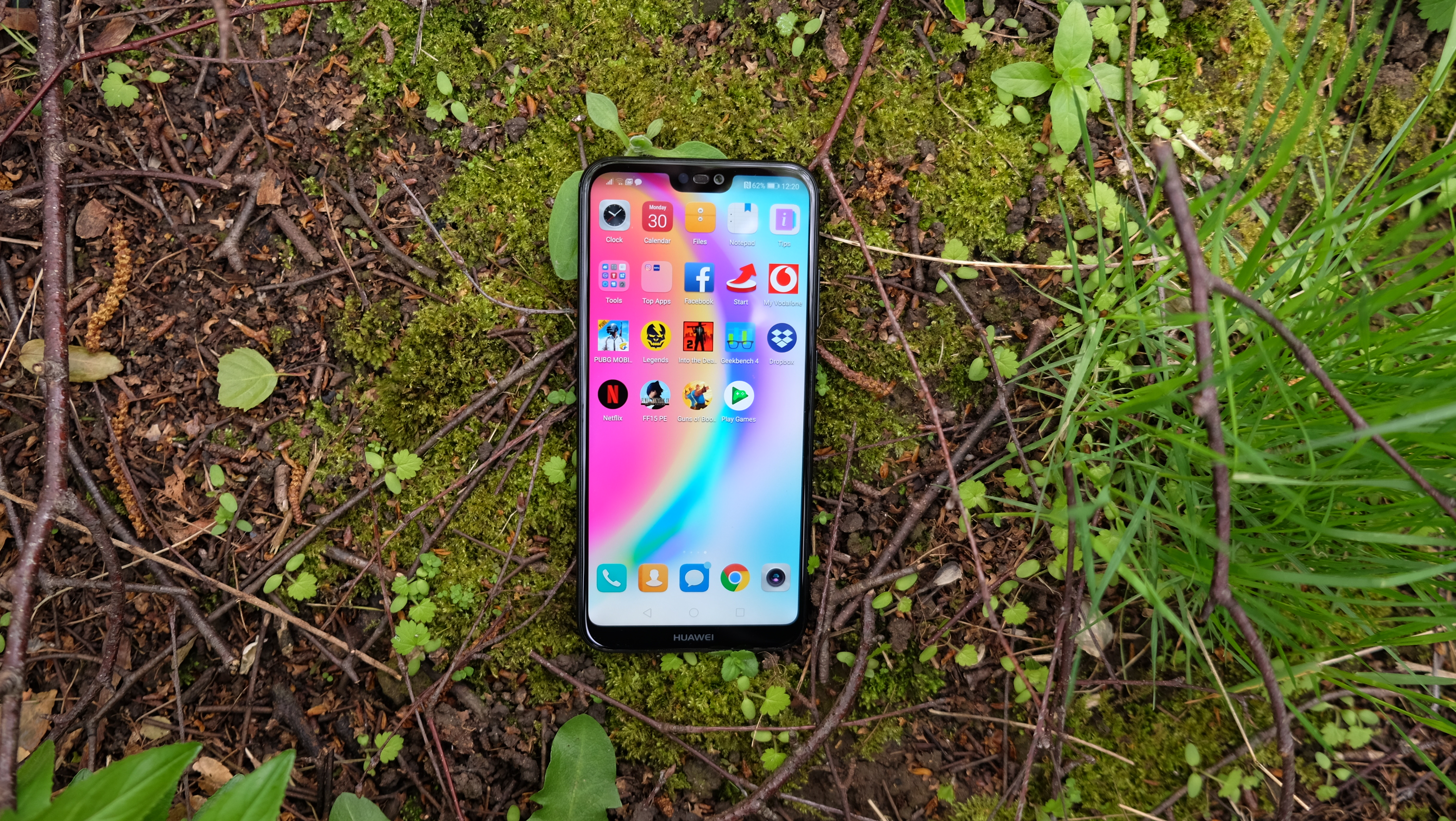 Despite having P20 in its name, the Huawei P20 Lite is no match for the rest of the range and nor is it a flagship. Instead it’s a mid-ranger, but it’s quite a good one.

For one thing, it looks good, with a glass-backed design that’s similar to the Huawei P20, down to the notch on the front.

Plus it has face unlock, a dual-lens rear camera, an octa-core chipset and 4GB of RAM. However, this is a mid-range chipset and not as good as the ones some similarly priced alternatives have. But power aside the Huawei P20 Lite doesn’t feel like too much of a step down from the full P20 experience. 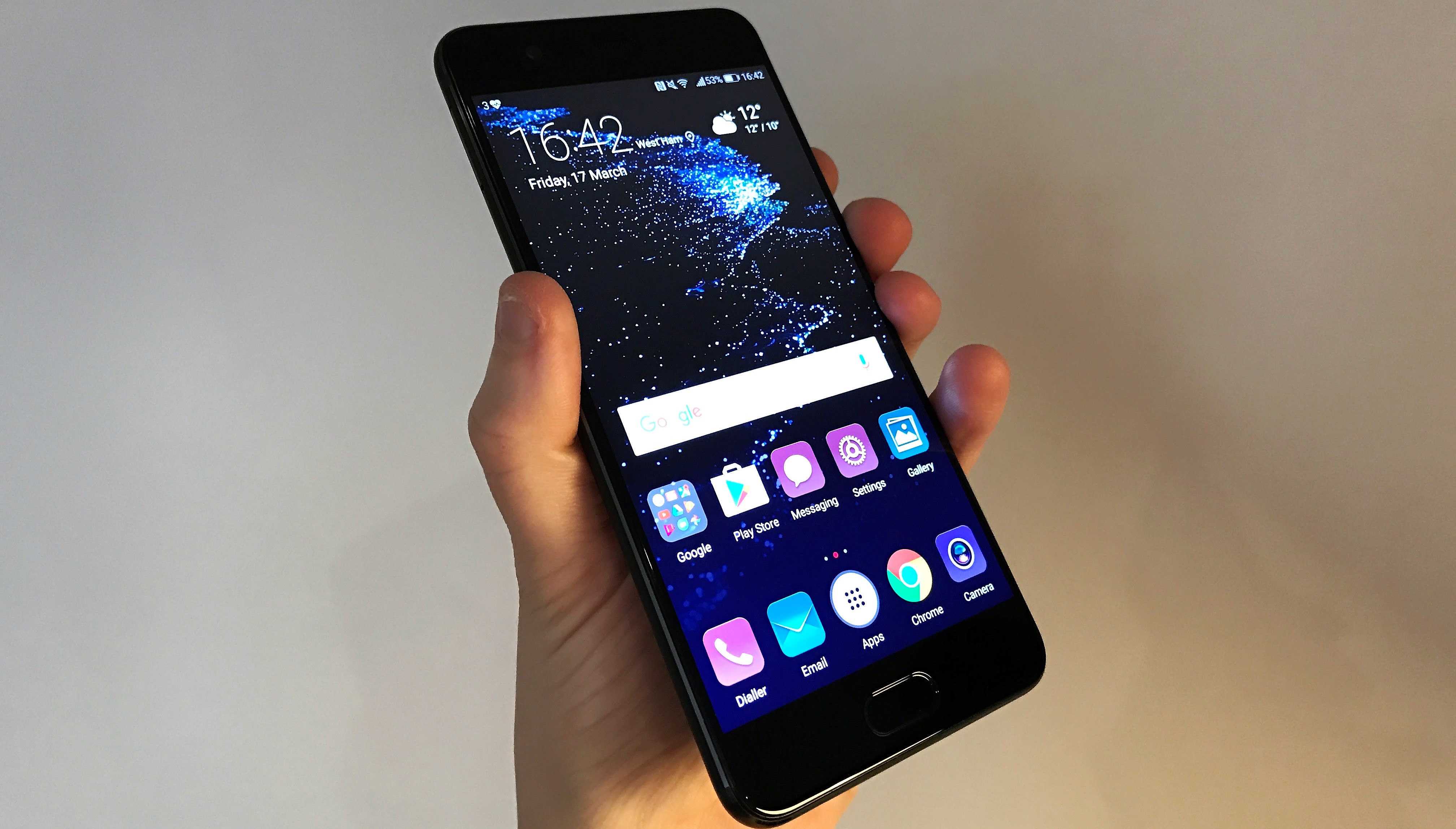 One of Huawei’s 2017 flagships, the P10 Plus is getting on a bit but still compares well to most upper mid-range handsets.

Highlights include a bright, 5.5-inch QHD screen, a dual-lens camera giving you both a 20MP monochrome and 12MP color lens to play with, a big 3,750mAh battery, 6GB of RAM and a solid octa-core chipset that was once high-end and is now mid-range.

It has also got a slim metal frame and if you don’t like notches you’re in luck – the Huawei P10 Plus doesn’t have one.

The design feels slightly dated compared to the latest flagships and it lacks a couple of features, like water resistance and wireless charging, but otherwise this remains a strong handset. 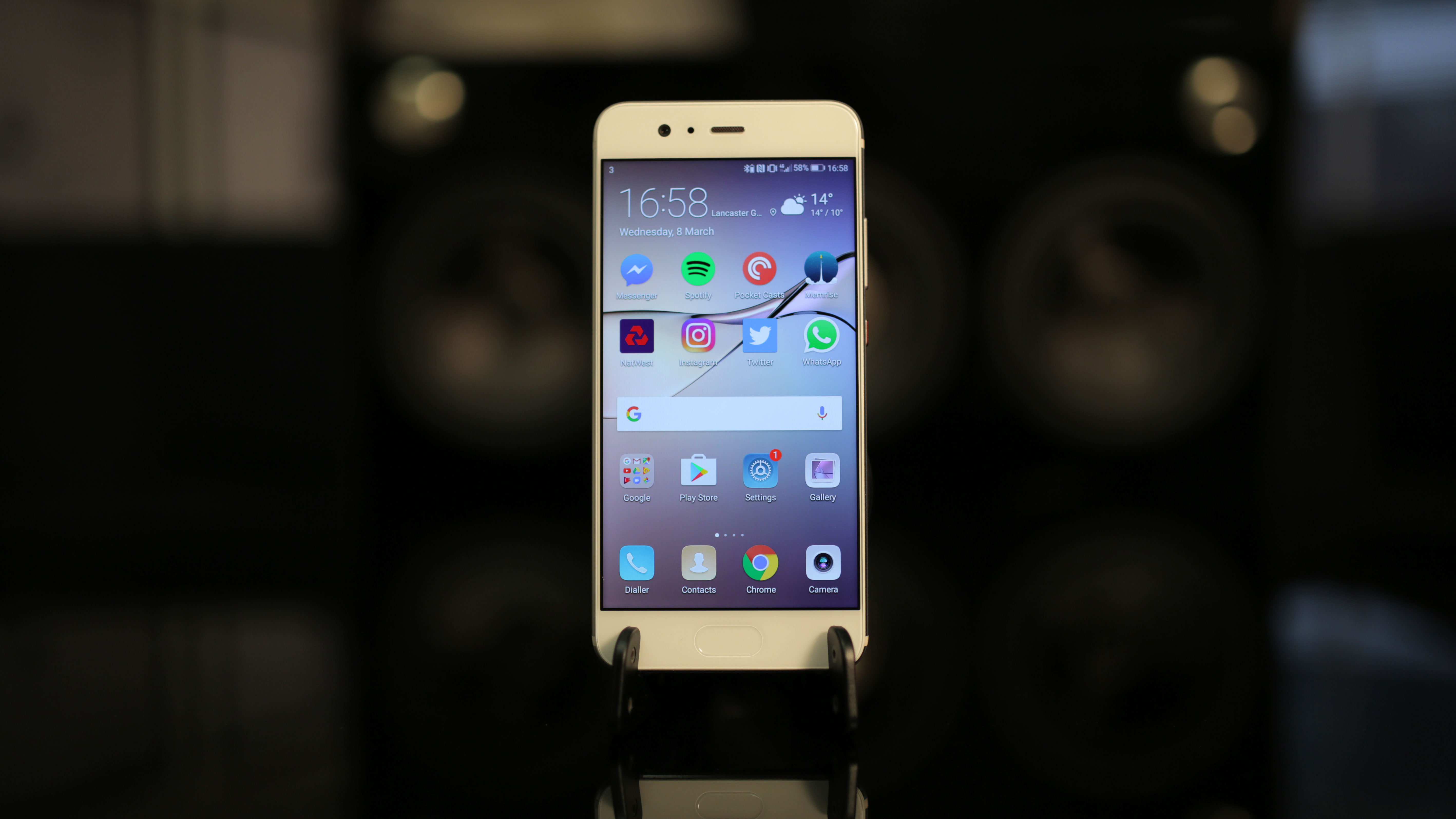 The Huawei P10 could almost be thought of as a compact phone, thanks to its 5.1-inch screen, but unlike most small handsets this isn’t a budget phone – it’s a 2017 flagship.

It has a 1080 x 1920 resolution, the same dual-lens camera as the larger Huawei P10 Plus and a similar design too, with a metal frame and large bezels above and below the screen, but no notch.

One thing we praised in the review is its fingerprint scanner, which does more than just unlock the phone, as it can also be used to navigate parts of the interface by swiping or double tapping it.

The Huawei P10 doesn’t have the best chipset or battery life, but at this point you might be able to find it for far less than it once cost, so it could be a bit of a bargain.