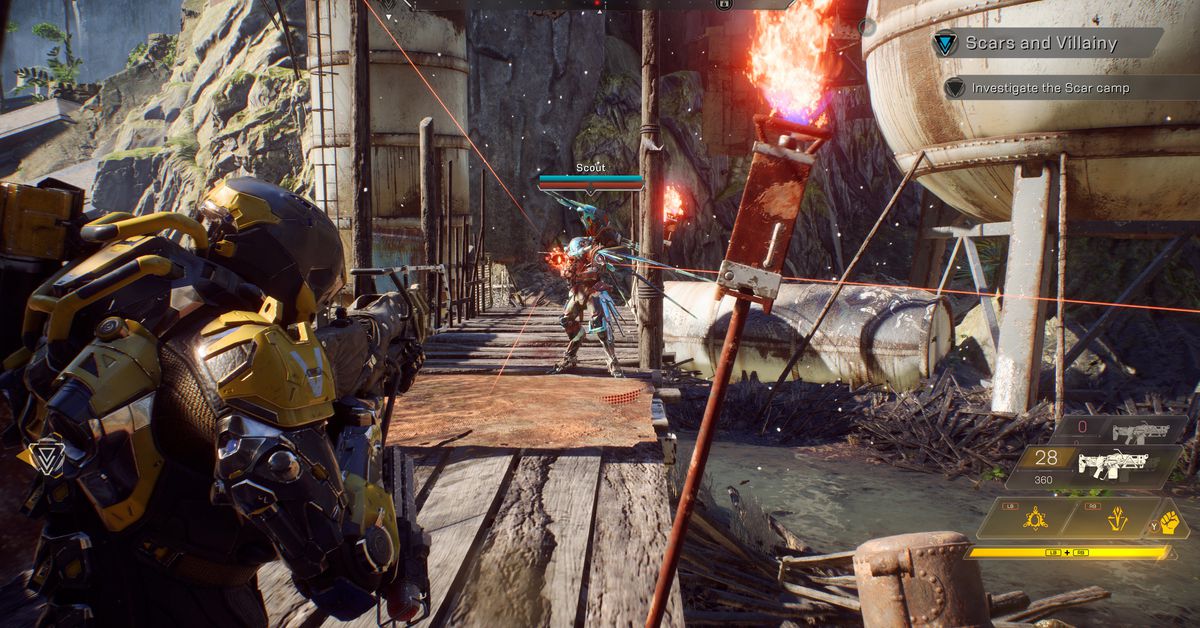 Both the VIP and open Anthem demos are done, meaning players will have to wait until the game’s preview goes up on Feb. 15 or the full game releases on Feb. 22 to play more.

In the past several weeks, Anthem’s developers — specifically Ben Irving, Mike Gamble, Jonathan Warner and executive producer Mark Darrah — have been using their Twitter accounts to reveal changes from the demo to the full game.

We’ve collected 19 of those tweaks here.

1. Voice chat with strangers will be on by default

Anthem is primarily designed to be played with other people. To promote that idea, players who run into others in the open world will have voice chat on by default. This should ideally help folks looking to do similar activities communicate without having to group up or friend each other for future missions. Though obviously it’s open to abuse as well.

2. Squad location and status will be easy to find

There is a squad widget at launch. You can see it in some of the more recent Anthem Videos they have been released. Much easier to track your squad mates https://t.co/66HCsVxTSG

Players will be able to keep better track of their allies in the full game. A list of members of your squad, along with their health bars and locations, will be displayed at all times. This should help players find each other’s downed Javelins as well as keep tabs on who is struggling where.

3. Walking around Fort Tarsis will be faster

Walking around Fort Tarsis will be likely big a big part of the full Anthem game. But in the demo, it was pretty slow to get around. In the full game, players will be able to move faster in the space. Phew.

4. Framerate will be fixed for console players

Different parts of Anthem are still in flux, but console players should expect a more fluid experience come Anthem’s launch. The Xbox One and PlayStation 4 versions of the game will have their framerates locked at 30 FPS.

5. Promote to leader will be available for squads

Grouping up in the Anthem demo didn’t always work like it was supposed to, which made changing up groups frustrating. When the full version of the game comes out, players will be able to promote a new group leader, which should help groups stay together when one member has to leave.

6. Inscriptions will display correctly, rather than 0 percent

In the demo, some inscriptions had a visual bug that showed their effectiveness at 0 percent. This will be fixed in time for launch.

7. Primer and detonator abilities will be more clear

Combos are fairly unique in Anthem’s combat. But figuring out what can prime and what can detonate was a little confusing in the demo. This has been updated in the full game, and icons have been added to make it more clear.

8. It’ll be easier to see underwater

Getting lost in the stronghold mission’s underwater sequence was easy in the demo. The brightness in the water has been increased in the full launch … or at least Irving is “pretty sure” it has.

9. Inscriptions will be for the correct Javelin each time

In the demo, some players ran into a bug where gear pieces for specific Javelins could have inscriptions for other Javelins on it — making them impossible to use. While not entirely positive, Irving states that players should expect this to be fixed for launch.

10. One of the new Javelins will be unlocked after the game’s tutorial

The Javelin selection process has been confusing, and players had to wait until level 12 to unlock more Javelin options. When the full game is released, players will be able to select their first, new Javelin as soon as the game’s tutorial is over.

11. Weapon and ability balance has changed

Some Javelins, weapons, and abilities have been re-balanced since the demo build was completed and will be more or less powerful in the full game.

12. Crafting items and materials won’t be purchasable for real money

Crafting elements of any kind must be acquired through in-game activities. Players won’t be able to use real money to purchase crafting materials.

13. Game performance will be improved

As with the framerate on console, players should expect a more stable game once Anthem is officially released. That’s the plan, anyway.

14. Players won’t be able to hold onto echoes indefinitely

In a few missions, players need to collect Echoes and return them to a central hub location. But with only so many spawning on the map, this can be a serious problem if one person either wants to troll intentionally or simply doesn’t realize they have one. There will be some fix for this problem in the full game.

15. Screen size can be adjusted

Depending on screen size, players may have trouble seeing everything in the game’s HUD. In the full game, players will be able to re-size their screen.

16. The Launch Bay will be a new social hub

After a mission, you can head back to Tarsis and catch up with some of the amazing characters we’ve created for you…OR…head back to the brand new Launch Bay, hang out with your friends, use the forge, reload and grab a new contract. Yeah, we listened to you… details soon! pic.twitter.com/m5sp96IpDh

Fort Tarsis isn’t the only social hub in Anthem. When the full game is released, squads will be able to return to the Launch Bay and go on adventures together there. While not all the details have been revealed, this is a less story-focused, more social area for players to launch missions from.

17. All cosmetics are earnable with in-game currency

We think we fixed this on the main game. Need more testing to make sure. You can blame me for that one. Programmer asked to put it into the demo but we didn’t want to take the extra risk, as the fix came in late. https://t.co/HRy6qmVvGt

In the demo, there was an obscure bug that caused enemies to teleport in the middle of combat, completely disappearing from the game world. In the full game, this bug should be fixed.

19. Factions to work for

Getting those points applies to challenges, which unlock crafting blueprints and other goodies. They also change the look of your personal Fort Tarsis.

Players will be able to encounter three different factions in the main game. Working for them will allow players to earn new rewards such as blueprints.

Irving has also taken to Reddit to clarify some changes to the live game’s PC UI changes as well as the PC controls.

While all of these changes may have made for a less-good demo experience, they should all contribute to a better Anthem at launch. More changes will likely appear between now and launch, but for now, this is a promising start.