1047 Games’ first project, Splitgate: Arena Warfare, is a first-person shooter that infuses the much-adored combat of Halo 2 and 3 with the puzzle-solving mechanics of Portal 2. It offers an adequate repertoire of firearms, including the beloved assault rifle and high-powered railguns, four medium-scale maps tuned for verticality and clever flanks, avatar customization, and myriads of battle modes (including fan favorites like deathmatch, free-for-all, and Team SWAT). The game retains the meatier health pools of its Halo predecessors and the gunplay – especially because of the inclusion of Halo-modeled weapons like the burst-fire battle rifle and deceptively strong pistol – feels nostalgically familiar.

Combat objectives remain simplistic: find the target and eliminate it. The implementation of portals, however, provides advantageous sight-lines and skillful maneuverability. At times, they can be a lethal weakness as enemies access them indiscriminately. I constantly found myself at the mercy of cunning players who used their portals to engage from multiple angles. With one button press, you can materialize a set of portals, at any given moment, on blue-webbed surfaces (see image below). As you might expect, portals are linked doorways between locations. There is no cooldown or reload time for the ability, although the split-second nature of firefights makes accurate portal-placement difficult. This is especially evident during daring escapes. Additionally, all players are equipped with a portal-negation grenade. While the projectile does no bodily harm, it can prevent opponents from using portals for quick getaways. 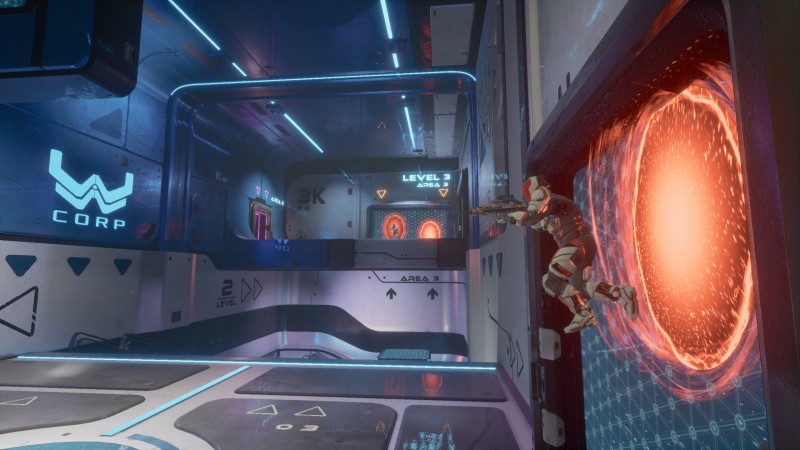 I found portals to be a forgettable mechanic in my first few matches. It hardly felt significant in vanquishing unsuspecting foes. With decent accuracy, most one-on-ones were winnable. But when groups of enemies entered the fray, survival became increasingly difficult. Once I started placing portals in the environment, my death-rate instantly plummeted. I was able to maintain killstreaks from safe distances and instead of haphazardly entering portals, I used them as windows to shoot enemies through. In a more communicative squad, portal gameplay transforms the battlefield.

“What we’ve seen from teams is that they’ve created different roles,” says 1047 Games’ CEO, Ian Proulx. “Certain players are constantly moving – ‘portaling’ all over the place so that you can’t keep track of them – and sticking together to outflank enemies. Typically, one other player posts up in a safe place to call out enemy movements.” 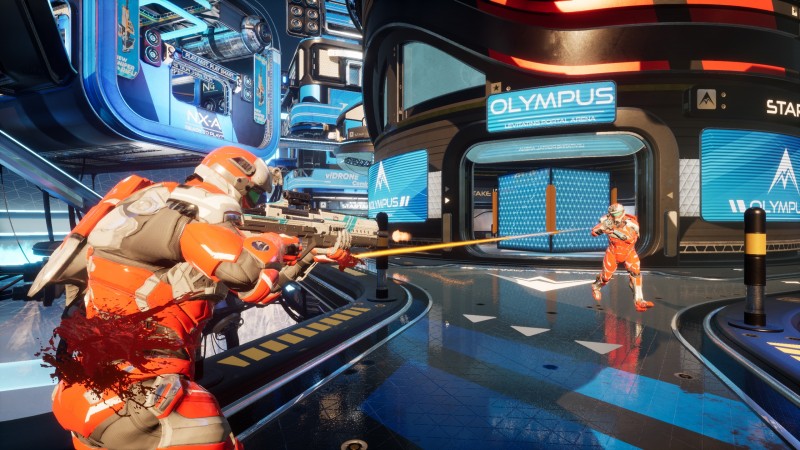 Strategic strafing and sensitivity modifications have the potential to lead to victory but, because portals replace the perks and kit-specific powers prevalent to other contemporary shooters, Splitgate players are forced to hone their weapon precision and memorize map geography. This will please shooter purists, but has the potential to alienate casual gamers. Proulx revealed a simple blueprint for expansive playlists that aim to separate player cliques.

“For ranked, we’re bringing back the Halo 2 1-50 ranking system; based purely on wins and losses rather than kill-death ratios,” he says. “We’ll also have a casual mode and a custom games mode including modifiers like low gravity, unlimited jetpack fuel, headshots only, etc.”

Additionally, for those looking to learn the ropes in a less demanding environment, private matches are available with options to play alongside and against bots. The A.I. is no pushover; enemy bots activate their own portals to hastily circumnavigate arenas. Moreover, with programmed auto-aim, players have a limited window to defeat their robotic combatants. As of right now, bots feel too powerful for newcomers, but 1047 Games has promised the implementation of difficulty settings.

Headshots, of course, are the fastest way to vanquish opponents, and each map offers a plethora of vantage points to make those bullets or plasma rounds easier to land. “Olympus,” a sporty arena touting neon-blue advertisements and floating platforms, provides many opportunities for sneaky portal routes. If players are truly clever, they can create optimal sight-lines on both ends of the map. “Silo,” with its iridescent lights and chillwave music, is club-themed. Its middle sector is a popular battleground, but long corridors make the trip to the center susceptible to ambushes. On “Helix,” close-combat weapons like shotguns and, surprisingly, rocket launchers, reign supreme. Here, tight hallways prevent quick portal escapes, so gun accuracy is key. Finally, the galactic “Outpost” houses an overarching sniper tower, only accessible by portals, well-timed jumps, and player-momentum.

Of note is Splitgate’s pro-gamer-majority community. Play-test suggestions have been incorporated into routine updates, meaning that 1047 Games has established itself as a small developer that listens. When considering a wider competitive scene for Splitgate, however, the developers opted to focus on optimizing the game itself rather than rushing to rally an esport.

Finally, we talked to Proulx about the game’s longevity. Incoming features include basic portal tutorials, large-scale battles and larger team rosters, more maps, and in-game “MVP” announcements (that could provide benefits for up-and-coming streamers), among other content plans. 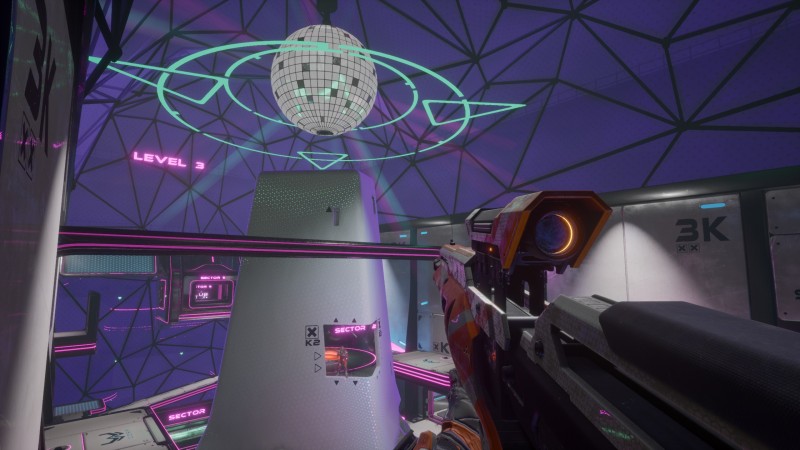 “We want something that’s easy to learn and difficult to master,” says Proulx. “Anyone can pick up the game: it has forgiving shooting mechanics and one incredibly complicated mechanic [portals] that takes hundreds of hours to master. But you can still, just from the shooting alone, find a moderate amount of success and have fun with the game. If you really want to reach that high tier, you’re going to have to grind.”

All you FPS enthusiasts who yearn for a team-based competitive experience devoid of the ability-clutter in modern shooters, Splitgate: Arena Warfare is for you! A specific date has not been confirmed, but the game is likely to release this Summer in the $20-$30 price range. It will be available on PC but may find a home on consoles soon.

For a blast to the past, watch our replay of Halo: Combat Evolved or our Portal (2007) discussion on The Game Informer Show. If Splitgate: Arena Warfare piqued your interest, check out an extensive list of Our Most Anticipated Shooters Of 2019.